We all know about the Wild West. Men wore cowboy hats—white stetsons for good guys, black for bad ones. Everyone was armed with a six-shooter, and cowboys were old white dudes with names like “Tex” who’d grown up on the open range. Women came in two kickass models: good (frontier wives/ preachers’ daughters) and bad (dance-hall girls/Soiled Doves such as Big Nose Kate, Doc Holliday’s common law wife). Occasionally, the Soiled Doves—if they had a Heart-of-Gold—would become good saloon owners (like Miss Kitty in Gunsmoke) or even wives. On any given noon, there could be shoot-outs on Main Street. Or perhaps a gang of black-hats wearing long dusters would arrive in town, scope out the saloon, and then rob the bank, shooting their way out of town in a hail of bullets as they hightail it back to the Hole-in-the Wall/territory line/Mexico.

Except it turns out… not so much. The actual “wild west” only lasted about thirty years (1865-1895). Revolvers were newfangled inventions that only were accurate to about 50 feet, and (at least in the earlier models) would burn the shooter’s hands. The Shootout at the OK Corral occurred when Sheriff Virgil Earp, along with his deputized brothers and Doc Holiday, enforced Tombstone’s anti-gun ordinance. The only things that occurred less frequently than shoot-outs were bank robberies—probably less than ten across that period. 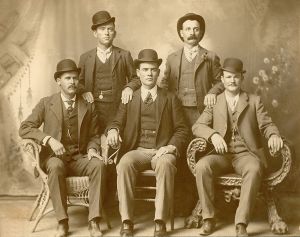 Not a stetson between them… [“Fort Worth Five Photograph.” –Supposedly taken after the Hole in the Wall Gang robbed the bank in Winnemucca, Nevada and sent to the bank manager along with a thank-you note from Cassidy
Front row left to right: Harry A. Longabaugh, alias the Sundance Kid, Ben Kilpatrick, alias the Tall Texan, Robert Leroy Parker, alias Butch Cassidy; Standing: Will Carver & Harvey Logan, alias Kid Curry; Fort Worth, Texas, 1900.
Source: From the studio of John Schwartz.]

The cowboys? Those newcomers learned the profession from Mexican vaqueros, who had already invented the lingo (bronco, lariat, rodeo, stampede, etc) and lived the life for 200+ years. Of those new “American” cowboys, at least a fourth were hispanic or black—often former slaves. And oh, yeah— those hats? Except for the vaqueros’ sombreros, you’d be hard-pressed to find anything remotely resembling a stetson (black or white).

But even though history (and Hollywood) got so much of it wrong, there’s still something compelling about that period that defined so much of what we Americans believe ourselves to be—adventurous, brave, and entitled as hell.

Molly is about to set off on the quest of a lifetime . . . of two lifetimes. It’s 1861 and the Civil War has just started. Molly is an eighteen-year-old girl living on her family’s farm in Virginia when two deserters from the Southern Cause enter her life. One of them —a twenty-four-year-old Huck Finn—ends up saving her virtue, if not her life. Molly is so enamored with Huck, she wants to run away with him. But Huck has other plans and is gone the next morning before she awakens.

Thus starts a sequence of events that leads Molly into adventure after adventure; most of them not so nice. We follow the travails of Molly Lee, starting when she is eighteen and ending when she is fifty-six. Even then Life has one more surprise in store for her.

My review: 5 out of 5 stars for Molly Lee

I was intrigued when author Andrew Joyce took on the Wild West meme and combined it with those quintessential America-defining characters, Mark Twain’s iconic Tom Sawyer and Huck Finn. What happens, he asks us to imagine, when Tom and Huck grow up? They’ll go through the Civil War—Confederates, of course—and that crucible will undoubtedly change the men they become. Their tale is told in Joyce’s first book, best-seller Redemption. In that novel, there is a short encounter with a beautiful 18-year-old, Molly Lee, rescued by Huck from Yankee rapists before he leaves to continue his life.

Andrew Joyce is the author of the best selling novel REDEMPTION: The Further Adventures of Huck Finn and Tom Sawyer. His latest novel is entitled MOLLY LEE. He lives on a boat in Fort Lauderdale, Florida with his dog, Danny.

Molly’s story is told in Joyce’s next book, Molly Lee. Infatuated with Huck after he saves her and her family, Molly asks to go with him but is told, “Miss Molly, there’s something you’ve got to know about men. I mean, honorable men. And that is, when a man accepts another man’s hospitality, he does not ride out the next day taking that man’s daughter with him. Do you understand what I’m sayin’?” Molly, who doesn’t understand anything except her feelings for Huck, is devastated when she gets up the next morning to find that he and Tom have left.

She decides to catch up to Huck, and sneaks away from her family’s farm. Almost immediately, she’s assaulted, raped, and nearly murdered. Worried that Huck will no longer want her, but unwilling to return to her family because of her “shame”, Molly decides that dwelling on what she’s lost would continue to give her rapists power over her. “I realized that as long as I carried on about what has happened, these men would still be having their way with me.” She can’t think of anything else to do other than continue her search for Huck. That quest provides the background to the next thirty-five years of Molly’s life.

Although she finds in later years that Huck is the subject of so-called Dime Novels presenting sensationalized versions of his exploits, it’s Molly’s life that actually reads more like a Dime Novel as she hits almost every Wild West trope. Captured by a Cheyenne chief, she’s befriended and helped by one of his other wives. As she proceeds to make and lose fortunes, she’s aided at almost every point by kind strangers. With each setback, Molly follows that first rule she set against self-pity, and simply moves on to make the best of whatever life throws her way. From working as a whore to owning a saloon, from going to prison to running a ranch, Molly plays to win with the cards she’s dealt.

In some ways, Molly Lee’s story reminded me of Miss Kitty in the old western, Gunsmoke. Although the details are glossed over, Miss Kitty’s background and actual position as owner of a saloon complete with “dancing girls” means that she’s running a brothel. Her decades-long attachment to Marshall Dillon is—if perhaps, not exactly unrequited—certainly not going to include a wedding ring. But that’s where Molly is different. Clearly, the only “fate worse than death” she can think of is…well, death. If she’s kidnapped and abused, she’ll just bide her time until she can escape. If the man she “hungers after” leaves, she’ll follow him. If he’s killed, she’ll mourn and move on. But either way, she knows that to give up is to give others the ultimate power over her destiny.

In a character-driven story such as this, I really admire the way author Andrew Joyce lets us see how Molly changes, adapts, and grows over the decades. While the plot leans more toward the fantastical chances and exploits of those dime novels, the pace and storyline kept me rooting for Molly. Plus Joyce’s beautifully spare description and low-key emotion seem perfectly suited to the pragmatic Molly.

The cowboy movie was typically the way America used to explain itself to itself. Who makes the law? What is the order? Where is the frontier? Which ones are the good guys? Why is it that a man’s gotta to do what a man’s gotta do–and how does he do it? Each Hollywood western, no matter how trite, was a national ritual, a passion play, a veritable presidential election dramatizing and re-dramatizing the triumph of civilization, usually personified as the victory of the socially responsible individual over “savage” Indians or outlaws. “They tell me everything isn’t black and white,” John Wayne growled in 1969. “Well, I say why the hell not?”–American film critic J. Hoberman

If westerns as a genre are about seizing control of our own fate—the ultimate American-defining trope—then maybe, just maybe, Molly Lee is as American as a western could possibly be. Certainly, I think it deserves every one of those five stars. And I can’t wait to see which tropes Andrew Joyce will take on, redefine, and make his own when the third book in the series explores what’s next for Molly Lee and Huck Finn.