“Think of your son. Think of your husband,” Trump continued. “I’ve had many false accusations. I’ve had so many. When I say it didn’t happen, nobody believes me.”—Donald Trump mocks Christine Blasey Ford’s Testimony at Mississippi Rally 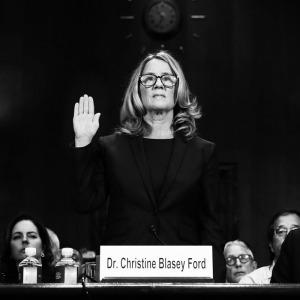 I sat in front of my computer, riveted to the live feed of the hearings. I watched Dr. Ford’s gut wrenching  testimony and Brett Kavanaugh’s bewildered, infuriated response. And as the tears poured down my face, I remembered…

Events such as this happened to almost every woman of my generation. Lives were ruined, damaged, or simply never realized full potential. Overall, we got on with the business of living despite the memories we didn’t let ourselves think about.

BUT THAT’S NOT WHAT WE WANT FOR OUR DAUGHTERS AND OUR GRANDDAUGHTERS. IT HAS TO STOP.

Sure, decades have gone by since the events below occurred. I’ve had a good life. But I couldn’t help wondering…if I heard that my “date” was going to be in a position to make decisions about women’s rights to decisions about their own bodies, would I be as brave as Dr. Ford? Even though like her, I have spent so many years deliberately quashing that memory that I would also have trouble describing the house, or even the day it happened, I would like to think I could be as brave as her.

The first time I heard it was on a date. Still in high school, I was flattered and thrilled when the guy I met at the dance said he was already in college. We went out a few times, group things like football games and friends’ parties. He asked me to dinner, and after the pizza said he wanted to swing by his parents’ house. When we got there, he acted surprised that nobody was home, but invited me in anyway. The necking was almost immediately rough. I said I needed to go home, and the next thing I knew we were on the floor, my hands trapped, and his teeth biting hard, mashing into my mouth. I tried to shout, but my voice came out in a whisper. “Please.”

Somehow I was sitting up, arms wrapped around myself. He brought me some ice in a towel, and told me he’d take care of me. When my mouth stopped bleeding, I said I was tired and asked him to take me home. I remember that I said “please”. When we got to my house, he kissed my cheek, said again how sorry he was, and started to get out of the car. I told him my parents were probably still up and that I’d go in alone.

All I could think of was that I wasn’t supposed to be at a guy’s house if his parents weren’t home, so I told my mother we’d been kissing a little hard and that I just needed to put ice on it. I wore high-necked, long-sleeved shirts to hide the bruises that blossomed by morning. The next day, a huge bouquet of flowers arrived. First time I got flowers. My mother put them on a table in the living room, and I didn’t enter that room again for the two weeks it took them to die. My friends said I was lucky—with me being alone with him at his house, it could have been worse. I didn’t feel lucky.

The difference was that this time I knew it was going to hurt. The mugger wanted the wallet in my hands. It was late night on the south side of Chicago, where I was in college. When he punched me in the mouth, I dropped the wallet. The police officer who took my report in the emergency room (as the doctor stitched my mouth and taped what would be a scar on my chin) said I was lucky—with me being “someplace I shouldn’t”, it could have been worse. I still didn’t feel lucky.

But it’s taken me years to realize that those were the same crime. Those experiences stole precious things from me. For years, I was nervous about dating, about going out after dark, or being in any situation where I might again be “lucky”.

The message was that it was my fault. My fault for voluntarily being in the wrong place at the wrong time. I never thought about whether that was true or not, until I had daughters of my own. My daughter was away at University when I got a call. She’d been crossing the street—on a sunny morning in a marked crosswalk—when another student in a convertible hit her. She went flying, landing on her head. She was lying there bleeding, with head and hip injuries that would take years to heal, when the police officer (after first comforting the sobbing driver who’d run her down) told her that she was lucky. Lucky that her long hair had been pinned to the back of her head, softening the impact. Lucky that she wasn’t dead. She told him that she could have been more unlucky, but lucky people don’t get hit by cars.

I was thinking of this when I heard that Malala Yousafzai won the Nobel Peace Prize. The announcer on the radio said that Malala had been “lucky” to survive the Taliban gunmen who boarded her school bus and shot her in the head, or those who issue streams of threats.

“We will kill you in such a harsh way that no woman has so far been killed in that manner.”

Lucky is not having to worry about whether your failure to say no loud enough and often enough means you are saying yes, like Emma Sulkowicz who is carried her mattress around campus to protest Columbia University’s failure to discipline the student she says raped her, despite similar complaints from his other victims.

Lucky is doing a professional job without an unending stream of anonymous rape and death threats because you’re a woman like Zoe Quinn and Anita Sarkeesian in a troll-dominated field such as game development. And lucky is not fleeing your own home like Briana Wu, head of development at Giant Spacekat, following violent threats against her and her family listing her address and personal information.

“Women are the niggers of gender,” the email said. “If you killed yourself, I wouldn’t even fuck the corpse.”

I blinked at my phone, fighting simultaneous urges to hurl my phone across the room in anger and cry. Later that day, someone texted me my address — telling me they’d “See me when I least expected it.” —Opinion by Brianna Wu on Jul 22, 2014

You know what? Malala and these other young women are not lucky. They’re brave. Brave enough to stand up and fight for their rights to education, to control their own bodies, to equal opportunities, and to defy those who threaten them with rape and death for doing so.

I think it’s time for all of us to stop being so lucky and start being mad.