A force of nature. FON. There’s no other way to describe my friend Sharon, an international human rights attorney who practices, lectures, and consults all over the world. Sharon wanted me to meet Lev Atlas, an incredible musician and long-time favorite performer on Arran, our small island off the west coast of Scotland.

She made it sound like the most natural thing in the world to ring up Lev and ask him to do a concert on Arran. At my house. SCoJeC (The Scottish Council of Jewish Communities) had some government funding to put toward the essentials—advertising and bagels. All we had to do was put up posters and make desserts. Piece of cake—preferably vegan and/or gluten free and/or kosher—right?

So I made a poster, and Sharon squared things with Lev. He confirmed that he’d have a few days between two European tours, and agreed to come. 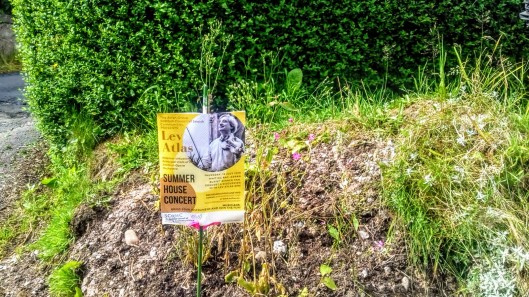 I’m not sure if other venues he played required this, but when Lev arrived, I asked if he’d mind assembling some of the concert posters onto garden stakes and putting them along the route to our house. He proved remarkably efficient, and was soon back ironing his shirt for the performance.

And what a performance! Lev charmed us with his stories of growing up Jewish in the Soviet Union, where it was almost impossible for Jews to attend university. Jewish children were expected to learn an artisan trade such as shoemaking. The one exception was music training, so parents anxious to obtain opportunities for their children handed them a violin. Lev told how he sneaked out to play with local children one day, and broke his collarbone. His father informed him that the rest of his bones would also be at risk if he didn’t manage to practice at least four hours a day. Lev practiced.

Although currently principal viola at the Scottish Opera Orchestra, it was his vintage violin Lev held up, inviting us to see how the top was mottled and bumpy with wear. “It looks like lizard skin,” he said. Clearly, that violin had been played outdoors in all weather, an essential accompaniment to weddings, funerals, and life events.

Klezmer, he went on to tell us, is the merge of two Hebrew words meaning “instrument” and “song”, and is often described as being as close to the human voice as possible, conveying both joy and sorrow.

Then, because Lev happened to mention the day before the concert that it would be nice if someone played the guitar—nobody who knows FON-Sharon will be surprised to hear she picked up the phone and arranged it on the spot—Tim Pomeroy, internationally acclaimed artist and locally beloved musician, offered some enchanting folk songs along with their history.

I was sitting on the stairs, so didn’t get a chance to take pictures. I wish I could share the magic of this incredible night. But the best I can do is invite all who are interested to get on our mailing list (arran@scojec.org) and join us for upcoming events.

I did have a few things I learned from the event.

It ain’t what you don’t know that gets you into trouble. It’s what you know for sure that just ain’t so.—attributed to Mark Twain

**[Okay, sure—according to that movie, there’s no such thing. This was clearly a case where my ignorance was bliss.]

Five dozen homemade cupcakes that I told the Hub I’d counted so he shouldn’t try to nab any in advance? Well, we do have a few of those left. Let me know if you need one…

We put out three packages of salmon. They evaporated. Then three more. Gone. Then a giant emergency-backup slab. Given all the leftover bagels, I have no idea where all the salmon was going, and I did NOT ask. Nor, for that matter, is there such a thing as too much vegan. Or kosher. Or gluten-free. Gigantic salad bowl packed with enough veggies to feed a green army? Gone. Vegan carrot cake and peanutbutter cookies? History.

Lev Atlas is currently Principal Viola of the Scottish Opera Orchestra and lecturer in Strings at the Royal Conservatoire of Scotland. A virtuoso Klezmer and Eastern European music performer, he is a living encyclopaedia of hundreds of traditional tunes and has influenced many musicians across Europe.
Lev has enjoyed an outstanding career as a classical musician in his native Russia, then USA and now the UK. A member of the international award winning Rostov String Quartet and first prize-winner of the International Shostakovich Competition and grand prix winner of the Borodin Quartet Competition, Lev has recorded extensively with Koch Swan International in Vienna, MCA Classics in New York, BBC Radio 3, Classic FM and WCBH Boston. His solo and lead performances include Wigmore Hall, Great Hall, Moscow State Conservatoire, Glasgow Royal Concert Hall, Usher Hall, St. Petersburg Philharmonic, and Atlantic City Music Festival.
In 2013 completed his PhD and was awarded a title of Doctor in Music and Philosophy by the University of Saint Andrews and the Royal Conservatoire of Scotland for his research, titled “In the Shadow of Shostakovich”.

33 thoughts on “Difference between a lizard and a violin? (And an Albanian Sex God, of course…) #humor #Scotland #Travel #Klezmer”