The night I betrayed feminism.

I blame it on old age, even older house, and a freakishly warm night in Scotland. If my house hadn’t been the victim of 150 years of floorplan fiddling, the loo wouldn’t have been at the end of the hallway and down a half flight of stairs. If I hadn’t entered such an advanced state of geezerhood that nocturnal visits to said loo are now the norm, I would never have been in the bathroom when we met. And if Scotland hadn’t been so weirdly warm, I might have been wearing something more than—well, what I wasn’t wearing—when she arrived.

But there I was, multitasking as I took care of my personal business while looking at my phone to check on my children*.

*[Don’t judge: 0-dark:30 in the UK is an excellent time to see what offspring in the US are posting.]

And then, when I was at my most socially unprepared, it happened. With an actual “ffft”, Spiderzilla landed on my bare leg and RACED. UP. MY. STOMACH.

Now, I’ve read Charlotte’s Web and seen the movie. I know Charlotte was an adorable and wise person of the arachnid persuasion as well as a gifted speller. But in my defense, Spiderzilla was no Charlotte. Not only was she big enough to carry off small piglets, but she was seriously fast.
[Image Credit: Charlotte’s Web 1973]

So I screamed, throwing my phone in one direction while leaping into the other. Spiderzilla fell to the floor in a graceful arc, and raced for the bathroom door, almost catching up to the dog (who usually accompanies my nocturnal excursions in case they somehow involve dog biscuits.**)

**[Yes, I’ve been known to stash the odd dog biscuit in the bathroom to placate Peri during extended visits. Remember the non-judgy bit we agreed on?] 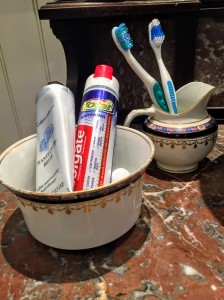 Despite my current sartorial shortcomings, I leaped up and gave chase, pausing only to grab the antique porcelain bowl holding our toothcare supplies.

Spiderzilla was already through the bathroom door and halfway up the hallway wall. Not a second to lose. I clapped the bowl over her fleeing form. She was so big, I could actually feel her throwing herself against the delicate porcelain.***

I looked around for something to use as a lid for the bowl so I could take Spiderzilla outdoors to her new life of freedom where she could spell inspirational words into spectacular webs or at least traumatize one of the other neighbors. ****

**** I take pride in considering myself something of a feminist. I’d forged a career, ending up in a corner office in a male-dominated field. I’d raised three strong, successful daughters and a proudly feminist son. No way was some spider, even one determined to break through her porcelain prison, going to break me.

And that’s when I realized I was standing, sans britches, in an empty hall. In the middle of the night. There wasn’t a thing within reach, even if I slid Spiderzilla’s bowl over to the end of the wall. Spiderzilla really did NOT approve of being bowl-slid. I could feel her thumping against the edges. I’m deeply ashamed to report that it took less than a second to abandon decades of feminist principles.

“HELP!” I screamed for the Hub. “I need you RIGHT NOW. It’s an EMERGENCY!”

He came stumbling out to the hall to stand next to the dog, both of them with remarkably similar expressions on their faces as they eyed my arms raised above my unclad self to press the toothpaste bowl against the wall. “What’s the emergency?”

“Spider,” I replied. “I need you to to take care of this spider and not ask any questions.”

I have to hand it to the Hub. He didn’t make cracks about strong modern feminists vs little spiders. (Well, not many.) He didn’t remind me—not that often, at least—of all the times I’d explained the obvious inferiority of every man ever born, with the possible exceptions of Clarence Clifton Brown (inventor of the hot fudge sundae in 1906), and Daniel Craig (inventor of Daniel Craig).

Instead, he picked up a piece of cardboard, threw back his shoulders, told me to step aside, and took over the bowl. Then he screamed and dropped everything when Spiderzilla leaped out and ran down his arm.

No, this wasn’t the Hub. Or Spiderzilla. As I recall it, the Hub was wearing fewer clothes, and the spider was LOTS bigger… [image credit: giphy]

There was a momentary tableau as the Hub, the dog, and I leaped for the stairs and stared down at Spiderzilla, who had paused in the middle of the stairway landing. In an act of colossal bravery, the Hub retrieved the (miraculously unbroken) china bowl and grimly announced, “I’m going in.” I patted his arm in assurance that no matter what happened in the next few minutes, I would always remember his bravery.

Luckily, he was able to recapture and remove Spiderzilla before she could wrap the dog in a web and eat her for breakfast. I took the empty spider-trap/toothpaste storage bowl to the kitchen to be boiled, gave the dog a biscuit, and went to bed. Then I got back up and stood under the shower until I’d run out every drop of hot water because I could swear I was still feeling spider legs running all over my skin. *****

*****Word of the Day: Formication—the feeling that bugs are crawling all over you. (I’m sure we’ll all sleep better tonight for knowing it’s an actual thing.) “Not to be confused with Fornication”—Wikipedia (unless it’s really time to break off that relationship…)

I feel like there should be some moral to all this or at least a referral to a really good therapist. The Hub feels he should now outrank both Clarence Clifton Brown AND Daniel Craig. I feel proud that I’ve kept him around all these years, and wonder if I should stop introducing him as my first husband. We have no idea what Spiderzilla is feeling.

This is NOT a photo of Spiderzilla. Because I had already flung my phone, I wasn’t able to get a good picture of her. This is one of her smaller friends who was hanging out on our porch furniture later that week. (Still disturbing though, especially when she leaped out of a blanket and onto my visiting niece—whose upcoming years of therapy will at least ensure that her shrink can afford top private schools for his kids. So at least something good will come of our spider infestation.)

How about it, Readers? Any close encounters with bugs of unusual size?

53 thoughts on “Don’t judge me. It’s not the ONLY reason I keep him… #humor #spiders #Men&Women”