A few years ago, we celebrated our first Thanksgiving in Glasgow. I already knew it would be difficult to get a turkey, as they don’t appear in the local shops until close to their traditional starring role as Christmas dinner.

But I heard about an organic turkey farm in Scotland, so I put the address into my phone Sat-Nav and headed out. Soon I was deep in the Scottish countryside, admiring a field with adorable ponies grazing in it, but worried about the fact that my phone wasn’t picking up any signals. By about the tenth time I passed that same field, the now-familiar ponies weren’t nearly as attractive, so I switched to traditional navigation. In Scotland, that means by pub: “Easy as kin be. Tak’ a pointy caw afore ye come tae th’ Prince’s Bonnit, then seicont left efter whaur th’ Three Cygnets used tae be ‘n’ up th’ brae tae th’ third track efter th’ Drum ‘n’ Thistle. Deid oan pest th’ Pipers Caa’ tae th’ wee road oan th’ left. Ye cannae miss it.”

By a miracle, I eventually found the farm just as they were getting ready to close up for the day. The shop attendant pointed out my waiting bird. I pointed out the unnerving fact that said bird was still breathing. After a little more negotiation (and much, much ££’s changing hands), I was carrying the freshly de-headed (and de-feathered and de-footed) bird to my car. That’s when the rest of the free-ranging flock caught sight of me.

I’m pretty sure they were gobbling, “Get her. She’s killed Mabel!” but I didn’t stop to ask as I sprinted for the car, turkeys in hot pursuit. I made it home without further turkey casualties, and dinner was spectacular. But this year I’m thinking…tofu.

As I’m struggling to assemble my usual list of things to be thankful for this year, I AM thankful that I have a Thanksgiving blog from our first Thanksgiving in an English castle to repost. We were living outside of Durham at the time—

Somehow I don’t think the Pilgrims did it this way… 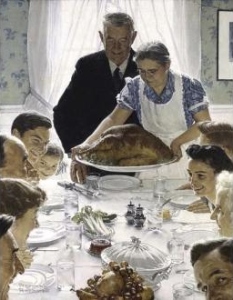 In Norman Rockwell’s Thanksgiving, Mom brings out the turkey, while Dad stands by proudly ready to carve the bird. Family and friends line the table, beaming with delight.

If Norman had been painting our Thanksgiving starting that morning, the picture would have shown me getting up before dawn (don’t be impressed – here in the north of England, that could be any time before about 9:00AM) because the dog was having a fit in the kitchen. The vet calls it canine epilepsy, but our daughter says we’re just getting Peculiar – living in part of a castle with a dog who has fits. Next, the painter could have included the soapy water flooding the kitchen from our washer, which is (like the dog) also prone to fits. The picture wouldn’t be complete without Turkey Tom, knocked to the floor by the dog and floating serenely through the chaos, his naked splendor emerging as he shed his layer of dry-brine among the soap suds.

Since Thanksgiving basically celebrates the Pilgrim’s successful escape from England, it is not surprisingly an under-observed feast here in the United Kingdom.

Although I ordered Tom weeks in advance, I got a phone message last week from the Farm Shop containing a heartfelt apology for the mistake in my order. Seems someone had accidentally put in an order for the middle of November, but I was not to worry: they had cancelled that order and I could pick up my Christmas turkey by Christmas Eve like the rest of the population of England. With visions of serving chicken to the dozen guests I’d invited to our traditional American Thanksgiving, panicked phone messages were exchanged. Tom was back as guest of honor, although when I went to pick him up, everyone poured out to see The American who eats her Christmas dinner in November.

While my husband shuttled kids from the train station, I used every towel in the place to soak up the flood, and then coaxed the washer back to life. As each university student arrived, she was handed a peeler and put to work on the mountains of potatoes and apples. By that evening, Norman Rockwell would indeed have seen a dozen faces admiring Tom’s (very clean) golden brown perfection.

And if Rockwell had hung around past the initial turkey shredding, he could have seen the delighted dog sitting next to what was left of the giant deep-dish apple pie meant for dessert. She was so thankful for the gift from the pie-angels. I’m thankful for wonderful family and friends who insisted the chocolate icecream dug out of the bottom of the freezer was the perfect end to such a traditional American Thanksgiving.

Please help me out here—what are YOU thankful for this year?

Falling off the Good-Dog wagon