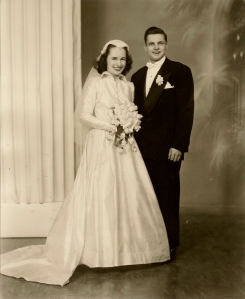 A Republican can love a Democrat but lock up the knives during election years.

Once upon a time (actually, it was February 23, 1952), a lovely girl named Genevieve married a handsome guy named Bob, even though he was a Republican. Despite epic spoon-flinging election year ‘discussions’ and a profound aversion to hugging, the next six decades produced ten children, nine sons-and-daughters-in law, twenty-nine grandchildren (plus assorted partners), and three great-grandchildren, and deeply affected the lives of many more.

Growing up on the south side of Chicago as one of eleven children, Bob absorbed several critical life lessons. 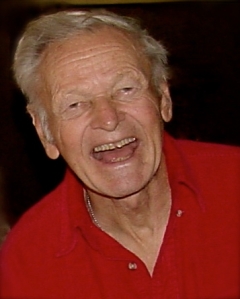 Let me tell you about my ten amazing children. (You might want to take a seat…)

After a few detours for service in the Army Air Force during World War II, followed by an engineering degree (Notre Dame, of course), Bob and Gen moved to California, where he continued to pass along life lessons to his growing family. Politics? A Republican can love a Democrat but lock up the knives during election years. Multi-tasking? If there was a California mission within a hundred miles, Bob would stop, deal out head-scarves to his eight daughters (or, if the scarves ran out, a spare kleenex and a bobby pin), and 45-minutes later he was stacking scarves and checking ‘done‘ on his top three priorities—family, religion, and education. Travel? From Big Basin redwoods and Santa Cruz beaches to cross-country expeditions, Bob drove all curves at top speed, often while using both hands to refill his pipe. Actually, his mountain driving inspired more fervent religious experiences for his passengers than every mission in California combined. Strangers? Bob never met one. He knew that everyone from colleagues to toll booth attendants would want to hear about his ten kids. In detail. Success? Bob collected the trophies of his victory over forty-plus years of tuition payments in his proudest possession, the display cabinet containing the mugs from all ten kids’ universities. 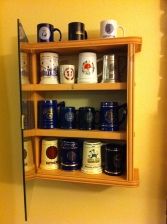 The most important life lesson Bob taught us was love. Love doesn’t require hugs or kisses or even words. Sometimes love is the old cars you keep repairing, the toilets you keep unplugging, the tuition bills you keep paying, the vacations and new cars you keep putting off. It’s making and sharing the perfect Tom Collins at the end of the day. It’s those tears you shed—proudly—at each of your children’s weddings. And it’s walking your guests to their car at the end of their visit, and then standing and waving until they are out of sight.

Bob, now we are honored and so grateful to be the ones waving you out of of sight as you leave to join Gen. No hugging.

9 thoughts on “Bang the drum slowly…”