That was Marshall McLuhan’s advice anyway. I invite readers to submit their own or other works (pg. 69 only of course!) via the Contact Form here.

I promise: you will be transported.–Bill Moyers

Part Mennonite in a Little Black Dress, part Growing Up Amish, and part Little House on the Prairie, this book evokes a lost time, in Lancaster County, Pennsylvania, when a sheltered little girl with big dreams entered a family and church caught up in the midst of the cultural changes of the 1950’s and ‘60’s. With gentle humor and clear-eyed affection the author, who grew up to become a college president, tells the story of her first encounters with the “glittering world” and her desire for “fancy” forbidden things she could see but not touch.

The reader enters a plain Mennonite Church building, walks through the meadow, makes sweet and sour feasts in the kitchen and watches the little girl grow up. Along the way, five other children enter the family, one baby sister dies, the family moves to the “home place.” The major decisions, whether to join the church, and whether to leave home and become the first person in her family to attend college, will have the reader rooting for the girl to break a new path. In the tradition of Jill Ker Conway’s The Road to Coorain, this book details the formation of a future leader who does not yet know she’s being prepared to stand up to power and to find her own voice.The book contains many illustrations and resources, including recipes, a map, and an epilogue about why the author is still Mennonite. Topics covered include the death of a child, Pennsylvania Dutch cooking, the role of bishops in the Mennonite church, the paradoxes of plain life (including fancy cars and the practice of growing tobacco). The drama of passing on the family farm and Mennonite romance and courtship, as the author prepares to leave home for college, create the final challenges of the book.
Page 69  Blush: A Mennonite Girl Meets a Glittering World (Herald Press, September 19, 2013)
Shirley writes: “My page 69 comes from a chapter called “Fresh Air” about my encounter with a girl my age from New York City who came to visit us on our Pennsylvania dairy farm through a program intended to help urban children. The story is one of my favorites in the memoir and has a twist on the end.”

On a recent Christmas visit to my family in Pennsylvania, I came across a stash of yellowed envelopes in Mother’s basement. I noticed on one of them a familiar return address – 178 Avenue D, Apt. 11-B, New York, New York. “This must be Josephine Martinez’s letter!” I thought. I examined the gracious flow of the handwriting. A woman who had carefully pressed fourteen outfits and placed them gently into a suitcase would have just this kind of penmanship, I felt. Sniffing the envelope—hoping for a faint hint of that New York City smell of garlic, cilantro, and perfume—I perceived only a whiff of aged paper. Inside were these words:

Shirley Hershey Showalter grew up on a Mennonite family farm near Lititz, Pennsylvania. The first person in her family to go to college, she eventually became the first woman president of Goshen College in Indiana, a national liberal arts college noted for its commitment to peace and international service learning. She joined the Fetzer Institute in 2004, a private operating foundation with this mission: “to foster awareness of the power of love and forgiveness in the emerging global community.” In 2010 she became a full-time writer living in Harrisonburg, Virginia. She has won awards for excellence in each of the fields she entered: teaching, higher education, leadership, and writing.

We received your wonderful letter, yes so wonderful and special for both of us. We really enjoyed it and cried over it. It arrived a week before Vicky’s birthday and her present too, of course. You did not have to send her a gift, that letter and the card you picked for her did it. You should have seen her, she was so proud and so small, too, drinking everything, every word from that very special card. I can never thank you enough for your thoughts for my daughter.

That letter brought Vicky back to me in a rush. I recognized her for what she was – my first window into the great world outside our small self-contained one.

Sixty years have passed since that plucky, lovely little girl entered my life. Without her in my childhood, I could not have known anyone who wasn’t European-American. Neither school nor church brought me into contact with people whose skin color or language were different from my own. Vicky, in many ways, seemed more American than I was. I was just learning about how Mennonite life was similar to and different from other ways of being in the world. She helped me see myself from another point of view.

For decades I seldom thought of Vicky during my busy mothering and professional years. But during the year I spent in New York City, in 2012, Vicky lurked everywhere like a vivid ghost. Finally, I took the subway to Union Square in lower Manhattan. I wanted to retrace the steps Vicky took in 1954. She had a long walk to the station, so she probably took the bus. Block after block of brown, red, and orange brick apartments surrounded the streets. Much of the cityscape must have changed, but there was one place I had to see. I walked past a Catholic church, St. Emeric’s, on 13th St. between Avenues D and C on my way to my destination. I could see Vicky in a white confirmation dress like the picture she sent us in 1960. Was this her church?

Sounds good? Get more information or your copy of Blush: A Mennonite Girl Meets a Glittering World from: 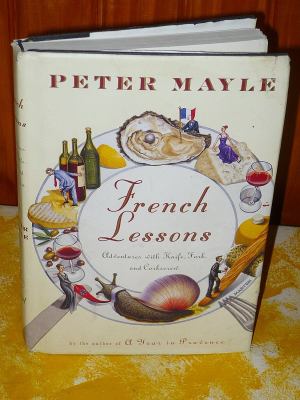 Genre: Memoir
Peter Mayle, francophile phenomenon and author of A Year in Provence, brings another delightful (and delicious) account of the good life, this time exploring the gustatory pleasures to be found throughout France.In this latest book, part travelogue, part guide to cuisine, Mayle leaves his beloved Provence behind and sets out to experience gastronomic pleasures available at food festivals and celebrations throughout France. The always curious and friendly Mayle befriends colorful locals at such events as a frog’s-leg festival in Vitel, where “thigh tasting” is regarded as a reverent act.

From Chapter “Aristocrats With Blue Feet”

Peter Mayle lives with his wife and their two dogs in the South of France. His hobbies include walking, reading, writing, and lunch.
His 1989 book A Year in Provence became an international bestseller; it chronicled a year in his life as a British expatriate in Ménerbes, a village in the southern département Vaucluse.
The French government made him a Chevalier de la Légion d’honneur (Knight of the Legion of Honor) in 2002, for coopération et francophonie.

Régis pretended not to have heard. “I see they recommend frogs’ legs to start with.” The hum returned, a little louder than before. Things were looking up. “It would be interesting to compare their taste to that of the chicken—one must have chicken when in Bresse, don’t you think?” It seemed that all had been forgiven.

We spent what was left of the afternoon exploring Bourg. I was all for buying a chicken to take back with me but Régis advised waiting until the next day, when, as we’d been told, there would be no shortage of prime fowl to choose from.

So we went shopping for postcards instead, finding that Bourg-en-Bresse takes its role as chicken capital of the the world very seriously. Almost everywhere the tourist sets foot nowadays, from Miami to Monte Carlo, the postcard of choice seems to be a panoramic view of six perfectly formed, perfectly bronzed buttocks belonging to three young ladies clad in G-strings and wishing we were there. I suppose it makes a change from more traditional scenery, but it does little to convey the true spirit of a place (with the the possible exception of Miami). In Bourg, however, there is no doubt what the visitor is expected to send home: a poultry card. The favorite is a graphic illustration of three fine and brightly colored birds—one blue, one white, one red—with a prominent reminder that Bresse chickens are the recipients of an AOC, or appellation d’origine contrôlée, a distinction that not even those three well-rounded young ladies could claim.

The honor was officially confirmed in 1957, nearly four hundred years after an entry in the archives of Bresse noted that the local chicken enjoyed a “belle notoriété.”

Sounds good? Get more information or your copy of French Lessons: Adventures with Knife, Fork, and Corkscrew  from:

I would really love to feature your Page 69! Use Contact Form here to submit your favorite Pg 69 (your own or other’s work)