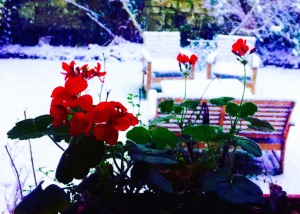 It’s been a strange, late winter here in Scotland. Just a week ago, I brought in the last of the roses. The geraniums in the window boxes are still blooming, despite the snow. The dog has been out making doggie-angels in the snow, and is now busily depositing gallons of melting slush and eau d’wet-dog all over the living room rug (the only actual good one in the house).
In her blog post on Naming Storms in Britain and Ireland [here], my ever-entertaining fellow expat, Ellen Hawley, talks about the political and social comparisons of named storms in the US and UK. It reminded me of this weather blog I posted a few years ago. Enjoy!

Weather and politics. It’s all local.

When I first moved to Chicago, I was too young to appreciate The First Law of Local Weather: no matter where you move, the natives have never seen this kind of weather before. Rain amazed Californians, blizzards amazed Chicagoans, hurricanes amazed Virginians, and tornadoes especially amazed central ‘Tornado Alley’ Illinois. Russians probably told invading Germans they never have such cold winters. I’ll bet you could go to Mars and little green creatures would assure you, “It’s a very unusual year. Normally, we have MUCH more oxygen here…”

An eight-year stint in Chicago still didn’t prepare me for real weather because winter is not scheduled in that city. Blizzards come as a complete surprise to Chicago officials every year. They would announce after the first snow of the season that municipal supplies of salt and sand were exhausted because of unusually severe weather, the like of which hadn’t been seen since the previous winter.

I know I’m not the only one who remembers the Lincoln Park Pirates. One January the City of Chicago was so shocked at the unusual occurrence of winter, their outsourced towing company hauled hundreds cars (including mine) to a lakeside park and then forgot where they put them. The snow-encrusted forms were soon obliterated by the snow removal crews who were also using that park as a dumping ground. Months went by before melting snows revealed missing vehicles.

Although central Illinois has strict zoning restrictions prohibiting any actual scenery, it does provide quite a bit of entertainment in the form of weather. My theory is that the powerful Weather Team Forecasters (WTF) demanded at least two tornado sightings a month in summers, plus premium pay for blizzards. That first summer we were in Illinois, every time we got into the car the WTF would respond with a weather situation. As we scanned a cloudless sky, they assured us that conditions were ripe for the formation of a tornado, and pleaded with us to seek shelter. Although we couldn’t help noticing that our neighbors would be out washing their cars and grilling brats, we chalked it up to the devil-may-care attitude for which Midwesterners are famous.

[NOTE to my Midwest cousin before she gets on my case: No, I am NOT accusing anyone in the Midwest of being in any way connected with the devil/ Satan/ Prince of Darkness/ the Republican Party. It’s called irony or sarcasm or something like that.]

Every once in a while, if the WTF got really lucky, actual weather would occur. Meteorologist: “There are big clouds forming… getting larger… pulsating… closer and… yes… we have reports of a funnel… Oooh, yes… It’s SO big, and it’s (pant, pant) getting ready to… touch down (gasp)… almost there… NOW… right now… YES! YES! YES!”

Afterward, the weather bureau had a cigarette and we lit more candles down in the basement.

Some years ago we moved to England. Our first winter there, our neighbors were gobsmacked by their conviction that was the wettest, coldest winter on record. Now we live in Scotland, and several of the other dog owners (and really, who else would even be at the park in a snowstorm?) just told me this is supposed to be our coldest year ever. Since last year, at least…

Spring will come to the north of England eventually. Fluffy white clouds, green fields dotted with sheep, lines of dead moles strung up by their noses…

41 thoughts on “The WTF: Weather Gobsmackage”