Writers, gods, and cigarettes in space

Writers are gods. We can build worlds and say how things work in them. This is the seduction and the problem with writing fantasy. If we writers say that a thirteen-year-old boy can wave a little stick and magic happens, then we had better build a world with some pretty severe limitations on that kid’s stick waving. If not, our story will be lucky to make it as far as a novella, let alone seven volumes and eight movies.

“–Phlebotinum is the versatile substance that may be rubbed on almost anything to cause an effect needed by a plot.

In essence, it is the stuff that makes the plot go. Without it, the story would grind to an abrupt halt. It’s science, it’s magic, it’s strange things unknown to science or magic. The reader does not know how Phlebotinum would work and the creators hope nobody cares.

According to Joss Whedon, during the DVD commentary for the pilot episode of Buffy the Vampire Slayer, the term “phlebotinum” originates from Buffy writer (and Angel co-creator) David Greenwalt’s sudden outburst: “Don’t touch the phlebotinum!” apropos of nothing. — [from All the Tropes ]

Applied correctly, phlebotinum lets us believe that a stick can do magic, and in the world built around that belief. But it’s a slippery slope that even masters of fantasy like JK Rowling or the public relations industry slide down occasionally, such as applying phlebotinum/magic to pierce the fabric of time and space so a student can take an extra class…

…or to sell cigarettes in space.

Nick Naylor: Cigarettes in space?
Jeff Megall: It’s the final frontier, Nick.
Nick Naylor: But wouldn’t they blow up in an all-oxygen environment?
Jeff Megall: (beat) Probably. But, you know, it’s an easy fix. One line of dialogue: ‘Thank God we created the, you know, whatever device.‘— Movie, Thank You For Smoking 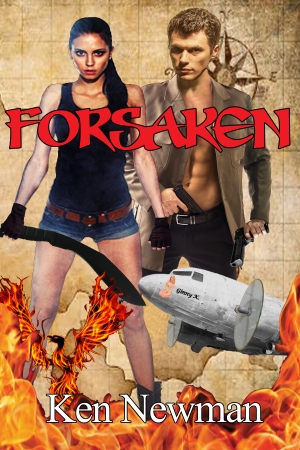 Gideon wasn’t the man Maggie wanted, he was the man she needed.

The powerful champion of a fallen angel she loves as a father, Maggie Black relishes her heroic life of danger and intrigue–until the day the angel betrays her and sends a witch to kill her. However, the assassin, Mrs. Kerr, is so impressed by Maggie’s unearthly abilities, she kidnaps her, making her a slave. The woman fakes Maggie’s death and changes her name to Hajar, which means forsaken. Once a hero, Hajar now serves the capricious whims of her new master, committing audacious crimes to support her lifestyle. When all seems lost, hope arrives in the form of a world-weary adventurer, Gideon Kane. Touched by Hajar’s plight, he bargains for her freedom, offering Mrs. Kerr a prize the power hungry woman cannot resist–the legendary Tree of Life, whose fruit can turn mortals into Gods.

As Gideon and Hajar track down Eden, they face bot hold enemies and new, while fighting their growing desire for each other,unaware they are pawns in a deadly game that could decide the fate of life on earth.

My review: 3 out of 5 stars for Forsaken by Ken Newman

Ken Newman’s latest book continues his series about fallen angel Larry’s attempts to do enough good deeds to undo his little lapse in judgement —the one that has him banished from heaven and headed eventually for “final judgment and a rather warm room without a view.” It resumes the story of Maggie Black, his apprentice or Paladin. Since her trials and sad love affair in The Paladin, Maggie’s life has gone to hell. Betrayed by Larry, the mentor she loved as a father, she’s now enslaved by an evil (but very polite) witch. Renamed Hajar (Forsaken), her only hope is for day-to-day survival. When she meets an elderly former adventurer, Gideon Kane, he bargains with her mistress for the freedom of all her slaves. As their part of the bargain, Maggie/Hajar and her fellow slaves join Gideon on a quest for a mystical book.

As I read Forsaken, I found myself trying to put my finger on just what was troubling me about the book. It wasn’t the pace, which rollicked along at an adventurous clip. The dialog was appropriately snarky, in a “we’re all murderous psychopaths, but we know how to have fun” way. Characters were a little flat, or that might just be that so many of them were thrown at the reader that it was hard to keep them straight, even though the author reduced many of them to their barest tropes. Even the romance between the main characters felt shallow and forced because we hadn’t had a chance to get to know them.

At the end, although I found the story entertaining, I think there were two real issues for me. The first problem is the plot itself. It felt convoluted, with numerous twists and turns that seemed to owe their existence solely to the nothing-like-a-good-quest-to-fill-up-a couple-hundred-pages school of plot design. Every time the plot bumped against the paranormal fallen angels/witches/demons/aliens/kitchen sink world, more phlebotinum was applied to move things along.

The second problem is the format. I finally got this when I saw the new trailer for Suicide Squad, another comic book being translated to movie. I realized that Forsaken—indeed the entire series—are not print books. They’re actually graphic novels that have accidentally strayed into the print world and really need to get back home. If you think about what the genius of a graphic novel accomplishes—each frame freezes a detailed picture of all the things happening in a world and then moves on to the next significant detail—then you see why a book with so many details would be more comfortable in a world where the author can just show them instead of constantly having to tell.

I’d give Forsaken three stars out of five and suggest that the author consider a series redo in graphic form. I think it would solve both of its problems and be hugely entertaining.

*I received this book for free from the publisher or author in exchange for an honest review. This does not affect my opinion of the book or the content of my review. 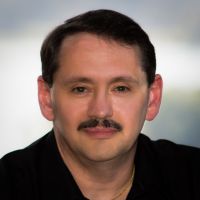 Ken Newman has loved stories of the supernatural since listening to his grandmother’s tales of witches, haints, boogers, and catawamps when he was a child. Author of urban fantasy novels, The Paladin, The Ark, The Voice in My Ear, and the upcoming Black Opal Books, Forsaken, his fiction reflects his Tennessee roots and his love for all things-that-go-bump-in-the-night.

Mixing folklore with modern themes, Ken’s novels create a twisted universe of supernatural creatures and larger-than-life heroes where nothing is as it seems.

When not writing, he enjoys sculpting, cheesy monster movies, and building the occasional trebuchet to keep the neighbors in line.

A member of the Authors Guild of Tennessee, Ken lives in East Tennessee with his long suffering wife Christian and their three zany daughters.