Firstly let me introduce myself. My name is Tric and I’m an Irish blogger, mother and ‘would love to be’ writer. Barb Taub has left you to holiday once more in India, inviting me today to try to console you in her absence. I’m not sure I’m up to the job but I’m more than happy to try. So as you all imagine how wonderful it must be to travel to India, let me try to seduce you with my tale of holidaying in Ireland as a child.

I grew up in Dublin the second youngest of five children. Our grandparents on both sides lived almost 200km away in very rural Co Donegal and we traveled to visit them regularly. However it was not always an easy journey.

Our journey would start early morning with tears, shouts and threats, before we even left our driveway. As the call to get into the car

began, my brother would be nowhere to be seen. As we waited for him to arrive I would note one of my sisters sitting by the window, HIS window. Somehow he believed it was his God given right to always sit at the passenger side window, and worse again, my parents agreed with him. When he’d eventually arrive the car would be started and he’d sit in on top of my older sister. Much shouting and thumping would begin as we drove off until my mother would let a roar out of her. Being the smallest, but not the youngest, I had no seat. I was passed from lap to lap amidst much moaning about my bony bum! Safety was not a top priority in those days and not a seat belt was ever used. On occasions, when tempers in the back flared, my younger brother and I would be allowed into the front seat to stand in front of my Mum, looking out the window.

The Ireland of my youth was a country divided (it still is but without the daily shootings and bombings). In order to get into Donegal we had to cross the border which was policed by a heavily armed British army.

As we got nearer the border, three and a half hours later, the tension in the car was palpable. Crossing the border was a serious affair, you certainly didn’t want to upset those soldiers. Before ever arriving my mum and dad would begin to issue us with warnings,
‘Behave yourselves’
‘No backchat’,
‘They are only young boys sent over here whether they want to come or not’.

Each time we crossed it was always the same routine. Initially a soldier would stop us and request my Dad’s driving licence in a very strong English accent.He would then put his face in the window to look at us all. As he did so my sister, who as a bolshy teenager was less than impressed with ‘the occupation’, would let our small shih tzu dog loose. The dog would leap at the soldier, barking it’s brains out and snarling, much to my Dad and Mums horror. The mad dog and the misfortune of sharing a surname very similar to a well known IRA leader, did nothing to help us get through the border at speed. On occasions we had to sit for a while waiting for clearance. As we did so soldiers surrounded the car, faces blank, pointing guns in at us, as if we were wanted terrorists, while my brother and I laughed at them, pulling faces when we thought our parents were not looking. Eventually, much to my parents relief, we would be allowed to continue our journey. Only another hour or so to go!

holiday. Yes we went on family trips to the beach, or climbing hills and sharing picnics, but that is not what I mostly remember. Instead I remember the hours of fun my younger brother and I had as we roamed the hills of Donegal together, fished for eels in streams, skip skapped stones in the tide and played in a world that only existed in our own imaginations. On many occasions we were oblivious to time, often racing home, as fast as a child can run in wellies, wet and late, to an evening tea of fried potatoes, onions and bacon. The holiday was always finished with a trip to a hotel for a meal out, a very rare treat indeed.

Over the years I have swapped the hills of Donegal for those of West Cork. For most of my children’s lives we skipped the foreign holiday of beaches, sun and pool. Instead I have done my best to recreate the Summers of my youth, to allow my children experience the freedoms which existed then and to enjoy childhood as I remember it. 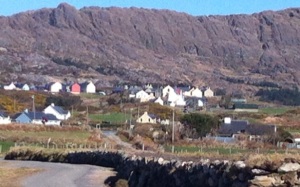 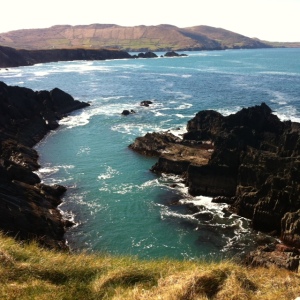 abroad, often embarrassed to tell their friends they were staying at home to holiday in Ireland. However once we’d arrive in beautiful Allihies, ditch mobile phones and the rules of living they thought were set in stone, I would watch them blossom, as they ran free in a timeless world, in a place unchanged for hundreds of years. There they discovered an Ireland they did not know existed and one I hope they will never forget.

There is plenty of time now they are almost grown up, to discover a world outside our own country, but I hope when they have little ones of their own they return to the holidays they remember and a new generation will run free.

You might even get the chance yourselves one day, if you’re really lucky.

Note from Barb: Thanks so much to Tric for joining us today!

Tric’s post reminds me so much of the holidays we took when our kids were young. We went every summer to a tiny cottage on Lake Michigan at the tip of Wisconsin. Once there, we would park the car and not turn it on again (with one exception) for the rest of the summer. In the mornings, the kids would go down to the tiny “yacht club” and they and their friends would take the club’s little boats out and spend the morning racing around the harbor. Afternoons were for the library, lazy book reading, hikes and bike rides. Once or twice each summer, we’d load everybody into the car and go to the drive-in movie theater, where everyone would lie on blankets under the stars and watch the latest movie. There were no fast food restaurants or chain stores, but there was one fabulous ice-cream parlor—Wilson’s—that churned their own ice cream.

I love that we were able to give this to our children. I doubt very much our grandchildren will ever know it.

If you haven’t had a chance yet, I urge you to check out Tric’s blog, My Thoughts on a Page. You’ll see why it was named 2015 winner of both Best Personal Blog and Best Writing by the Irish Parenting Blog Awards.

**Do you have a favorite childhood vacation story?