I just read the latest book in Shawna Reppert’s Ravensblood series and I was curious to see what direction her new release, Raven’s Heart, would take. Would she continue to follow and apply the hallmark gothic novel tropes [see How do you know you are a gothic novel heroine?] and how would that work to resolve the story?
See for yourself! 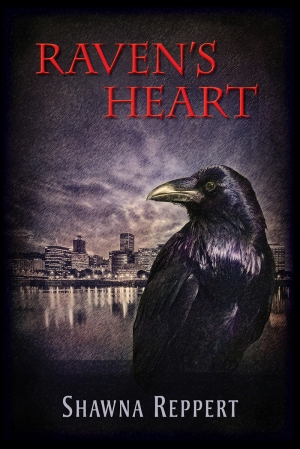 The reformed dark mage Corwyn Ravenscroft, Raven, has finally found his place in the world. He has a fiancé, friends, and meaningful work. Yet a shadow hangs over everything. His former master, the darkest and most powerful mage of their time, the man he betrayed, the man he thought he had killed, still lives. William is determined to destroy everyone and everything Raven ever loved. Will Raven find a way to defeat him, once and for all? Or will he see the life he has built crumble around him as William rises once again to threaten the Three Communities, perhaps even the world?

In my review of Raven’s Wing (Book 2 of Shawna Reppert’s Ravensblood series), I talked about elements that made it an almost letter-perfect example of a gothic novel. So when I received her newest release, Raven’s Heart, I was curious to see if she applied the same tropes. The answer is that she did. And she did not. 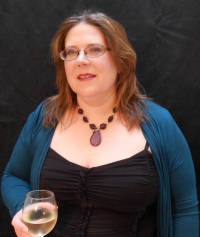 Shawna Reppert, an award-winning author of fantasy and steampunk, is proud of keeping readers up all night and making them miss work deadlines. She believes that fiction should ask questions for which there are no easy answers, while at the same time taking the reader on a fine adventure that grips them heart and soul and keeps them turning pages until the very end. “Definitely give this author a chance,” says one reader, “her storytelling will draw you in. Her style is just a hint of Andre Norton, a dash of J. K. Rowling, and the tiniest pinch of Anne Rice. The rest is her own unique stamp.” Her debut novel, The Stolen Luck, won a silver medal for original-world fantasy in the Global Ebooks Awards and an Eppie for fantasy romance. The first two books of her Ravensblood urban fantasy series won gold medals for contemporary fantasy. The much-awaited sequel, Raven’s Heart, was released on 2/6/15. Shawna’s love of live Irish music and dance frequently influences her work. Her four-footed children are a Lipizzan stallion and a black-and-orange cat named Samhain who occasionally takes over her blog. Shawna also likes to play with the Society for Creative Anachronism, and can sometimes be found in medieval garb on a caparisoned horse, throwing javelins into innocent hay bales that never did anything to her. She grew up in Pennsylvania, and now lives in the beautiful wine country of Oregon. Each has colored her writing in different ways.

This dark urban fantasy does authentically focus on its character-driven plot which starts out slowly but builds with each page until you are racing with the characters to their final confrontation. Reformed dark mage Corwyn Ravensblood—Raven—and Cassandra, the woman he loved and betrayed, have established a fragile but growing relationship. But their enemy, William, while weakened is stalking them with the single minded focus of a powerful hatred that has nothing left to lose. The real question is not whether they can withstand William, but whether their fight will cost the life and love they are trying to build.

Here are some of the main gothic novel tropes and how Raven’s Heart uses them.

I should start out by saying that with each book in this series, author Shawna Reppert’s writing has become more confident and her characters more complex. While you could read Raven’s Heart as a standalone, I don’t recommend it. You would miss the very real development of two compelling and flawed protagonists, and especially miss the backstory that drives the final resolution.

And that story is all about fathers and sons. Fathers who see their sons as extensions of their own ambitions, sons who compete for their fathers’ love even as they compete against their fathers, and father-figures who try to make a difference. In this dark and character-driven story, the rest of the characters might see Raven as an ultimately good man who has repented of the dark deeds of his past. But Shawna Reppert’s genius is in letting us see Raven’s truth. He is like a recovering addict, and his drug of choice is the lure of evil. And like any addict, evil is a trigger that appears all around him if he ventures into the world.

The ultimate conflict isn’t whether Raven will or will not be a match for William—enemy, father-figure, and friend—but whether the dark mage in recovery can resist evil, his drug of choice.

Shawna Reppert earns every one of her five stars in Raven’s Heart—and then some. If you haven’t read the first two books in this series, you are so lucky! You get to read the whole story without having to wait two more years like the rest of us. My advice is to get all three and make sure you don’t have any pressing commitments (weddings, births, Walking Dead marathons…) before you get started.