The Seals: I watched as he opened the sixth seal. There was a great earthquake. The sun turned black like sackcloth made of goat hair, the whole moon turned blood red, and the stars in the sky fell to earth, as figs drop from a fig tree when shaken by a strong wind. The heavens receded like a scroll being rolled up, and every mountain and island was removed from its place. —Revelations 6:12-14
[image credit: hotcopper.com]

Isaac Asimov wrote an essay for Modern Science Fiction (1953, ed. Reginald Bretnor) in which he claimed there were essentially three types of science fiction—gadget, adventure, and social science fiction. Let’s say, for example, that you are applying these categories to a post-apocalyptic parent explaining the world to their kid:

To see how this works, I turned once again to the ever-helpful Plot Generator and chose Science Fiction genre to create the following plot. 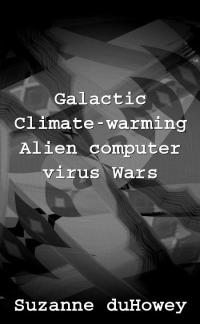 A long, long time ago in a resource raping galaxy…

After leaving the resource-raped planet Old Paradise Earth, a group of computer programmers taking part in a 12-step program for recovering internet addicts flys toward a distant speck. The speck gradually resolves into the mystery plague infested Space Temple of Solitude and Video Gaming, where their ship crash-lands near an organic seaweed farm.

Civil war strikes the galaxy, which is ruled by Major Planetraper, a global warming Government Bureaucrat capable of infecting seaweed farms with genetically modified kelp and even ocean coral polluting.

Terrified when he is proclaimed the Chosen One by a consortium of Broccoli and Kelp peoples, a teenaged Organic Seaweed Farmer known as Mickey Megachin flees the Empire, with his protector, Gaia Treehugger, and the recovering internet-addicted computer programmers.

They head for the Soulless Suburban Cluster-Trucks on the planet Fake New Earth. When they finally arrive, a fight breaks out. Treehugger uses her climate-warming alien computer virus to defend Mickey.

They encounter a tribe of soft spoken but terrifying Kindergarten Teachers. Treehugger is attacked and the Organic Seaweed Farmer Mickey is captured by the Kindergarten Teachers and taken back to the Soulless Suburban Cluster-Trucks, where Mickey is forced to spend his days reading The Rainbow Fish to insatiable five-year-olds. (Its moral: If you don’t want to be lonely, you need to rip off your skin or hair or anything that people are jealous of and give it to them. That way you’ll have friends. At least until you run out of skin and hair…).

Treehugger must fight to save Organic Seaweed Farmer Mickey but when she accidentally unleashes a computer virus while using her cellphone in a crowded theater, the entire future of the climate-warming, resource-raping galaxy is at stake.

Why am I bringing this up today? Well, Carol Hedges—my favorite writer of victorian murder mysteries with a touch of the paranormal—has just released The Final Virus, a new SciFi novella that resists easy classification.

The Final Virus by Carol Hedges

Dying is just a change of direction

Will’s father dies in a work-related accident. At least that’s the official story. But Will knows it isn’t true. Someone wanted his father dead – and he’s determined to find out who, and why.

The only person who believes him is strange, beautiful loner Amber. But she’s hardly ‘normal’ – always hearing voices and seeing terrible Apocalyptic visions in her head.

Will and Amber will have to use every resource they can grab onto to make sense of what is going on in their lives. Meanwhile as they get deeper into trouble, time is running out. And the President of Globecorp is watching them. He has plans…

The Final Virus, like Orwell’s 1984, paints a terrifying picture of a Dystopic world that has lost touch with its past and is about to destroy its future.

Back in 2007, SciFi writer Bruce Sterling proposed “An Eschatological Taxonomy“. (Yeah, I had to look that one up too. Apparently, eschatological means the study of the end of the world. Who knew?) According to this world-ending events scale, Carol Hedges’ new post-apocalyptic YA thriller is a level 2—

“Global civilization destroyed; millions (at most) remain alive, in isolated locations, with ongoing death rate likely exceeding birth rate. Chance of humankind recovery: slim. Many non-human species die off, but some remain and, over time, begin to expand and diverge. Chance of biosphere recovery: good.”—http://www.openthefuture.com/2006/12/an_eschatological_taxonomy.html

Carol Hedges is the successful UK author of 15 novels. 12 for teenagers and young adults, and three adult historical novels. Her books have been shortlisted for various prizes. Her YA novel Jigsaw was long-listed for the Carnegie Medal and her first Victorian Crime novel Diamonds & Dust was listed for the 2013 CWA Historical Dagger. She is currently writing the fifth book in her Victorian Detectives series. The fourth, Murder & Mayhem, will be published later this year.

So readers might be surprised to meet the main characters—teenagers who live in suburban houses, attend high school, go to the mall, and play video games on their home computers. At school, they are taught the history of the previous century’s disaster, The Great Cybercrash. Following the destruction of much of the world’s population due to climate change, worldwide crop failures, and plagues, a single company—Globaltraid—under a seemingly immortal President, led the remnants of humanity back to relative prosperity in a regenerating world. Or did they?

High school senior Will begins to question this version of events when his father is killed in a mysterious workplace “accident”. He is accompanied by the class outsider, Amber, who sees ever-increasing visions of the Four Horsemen of the Apocalypse. With the help of Ned—an artificial intelligence construct with a video-game addicted multiple-personality disorder—Will and Amber begin to kick over the stones that their world is founded on. What they find underneath could kill them. And destroy the world.

There were so many things I loved in this book, such as the way the action was set in a suburban location so normal it took a while to realize that for this Earth, the setting was anything but normal. I particularly liked the creepy President, a man so ancient he has trouble remembering to care about anything except his own ongoing survival. Both Will and Amber’s characters were believable as the high school’s golden boy and outsider girl. And even the supporting characters such as Will’s little sister, and the brother and sister of Will’s nemesis Mr. Neots, were fun to read if less well-rounded.

There were some pieces that didn’t work for me. Even in a low-tech post-apocalyptic tale like this one, the science was dubious at best. Okay, maybe there was an instantaneous and globalwide virus that caused every machine in the world to fail simultaneously. Didn’t anyone ever hear about backups? If most of the world’s ecosystem is wiped out, what are Will’s town and the others using for raw materials to make their cars, computers, and provide their food? And don’t even get me started on Ned, the all-powerful computer (who somehow survived the cybercrash and hundreds of years later still can hack current code?), or on the fact that despite it being centuries later, there has been no noticeable change in dress/morals/family structure/customs/language/housing/machinery? Why are all parents invisible, evil, or dead? And especially why is it that apparently only the descendents of white middle-class types have survived?

But even with these elements, I would give The Final Virus four stars. I enjoyed the way it kept adding twists and turns at each step. Amber’s semi-prescient premonitions contrasted well with Will’s appealing cluelessness, both in their developing relationship and in the unfolding events. I realize that it’s already a little long for a novella, but I wish that the ending had gone into more detail about events and their wrapup. Maybe fodder for a sequel?

I reviewed The Final Virus by Carol Hedges for Rosie’s Book Review Team.

*I received this book for free from the publisher or author in exchange for an honest review. This does not affect my opinion of the book or the content of my review.*

10 thoughts on “What makes it #SciFi? #RBRT #Bookreview THE FINAL VIRUS via @caroljhedges #YA #Apocalyptic”