Coffee with Barb and Patricia Sands 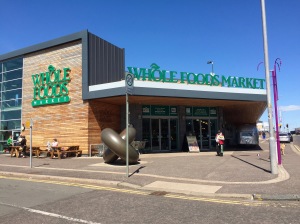 For my American readers, I realize that a trip to Whole Paycheck represents a fun if dollar-intensive experience, but hardly anything to blog about. Except the butcher asked if I wanted a fine wee bit of beef, and the cashier commented that the weather was dreich. And this was in the chiller.

Sometimes there just are no words…

Ah, yes. The life of an expat. When Americans get together here, I’ll bet what we miss would surprise you. Nobody talks about the hills of home, and most agree that with video chat and easy flight connections, they have no trouble keeping up with friends and family. But sooner or later someone will mention the holy grail, and there will be a long sigh of “Trader Jooooooes…”

We expats keep up a polite fiction that we only eat local specialties and scorn American fast food culture. But I can’t be the only one who has gone native for weeks or months only to succumb to Burger King in Moscow, Starbucks in Tokyo, Subway in Mumbai, or even (don’t judge me!) McDonalds in France. Because sometimes what’s good just takes a backseat to what’s familiar.

My point is that even when you move countries for the very best of reasons—love, adventure, and/or money—there is still a little voice in the back of your head that just wants to know when you’re going home. Even when the rest of you knows that home is where you already are.

My guest today, Patricia Sands, is an expert at foreign life and adventure. She’s going to tell us about her lifelong love of France. But please come back tomorrow for my next post, because I’ll review her latest book, I Promise You This, the final book in her Love in Provence trilogy, which talks about the tug of war between heart and home so familiar to expats.

For now, let’s leave a dreich Scotland for sunny France. Put on your most glamorous sunglasses, help yourself to the macarons and a café crème and sit back as Patricia tells us about finding romance in France.

A confessed travel-addict, best-selling author Patricia Sands lives in Toronto, Canada, when she isn’t somewhere else, and calls the south of France her second home. I Promise You This, Book 3 in her award-winning Love in Provence series, will be published May 17, 2016.
Find out more at Patricia’s Facebook Author Page, Amazon Author Page or her website. There are links to her books, social media, and a monthly newsletter that has special giveaways and sneak peeks at her next book.

First of all, full disclosure: I love France. I love everything about France. I need to state that right up front. To me, everything about that country oozes romance. When I am in France my senses are embraced and caressed by the romance in the scenery, the architecture, the food, the wine, the sea, the language, the history. I’m a fool for love there and I can’t help myself. If you didn’t know this about me before, you do now.

The seeds of my enchantment were planted way, way back.

Romance stories from France in the 12th and 13th centuries hold a privileged place in the world’s literary history. Epic poems performed by minstrels in manors and castles and the arrival of romantic expression transformed the warrior hero into a gentleman.

Among all the innovations of French authors in the 12th century, none is more influential than courtly love. The theme of a gentleman’s devotion to his often unattainable lady is quintessentially romantic in concept and causes multitudes of hearts to flutter to this day.

Associated first with the famous troubadours of southern France, who enjoyed a remarkable status as they travelled about, The Art of Courtly Love found an enthusiastic response. The romantic themes espoused also allowed an emotional and intellectual non-physical love shared in poetry and song. In 1350, the troubadours were crushed by the Catholic Church. But not before the notion of courtly love filtered through the rest of Europe and into the mainstream of literature where it continues to rule.

For whatever bizarre reason, when I wasn’t reading The Bobbsey Twins, Nancy Drew, the Hardy Boys or Trixie Belden in my early reader days, I was reading about castles, queens, knights and minstrels in seemingly romantic and magical lands far away. Namely France. Chivalry abounded. Courtly love fascinated me. Perhaps it was the quest to escape from small-town Northern Ontario as I grew up.

As a teenager I swooned and wept through the works of Jane Austen, Edith Wharton and Charles Dickens. Somewhere in the midst of the terror in a Tale of Two Cities, I became obsessed with France. I was gripped by the story’s setting of romantic and familial love against the bloody backdrop of the French Revolution. For me, there was never a more tragic, romantic hero than Sydney Carton. With every reread (trust me, there have been many …) I weep buckets over his final words as he sacrifices himself for his love for Lucie Manette: “It is a far, far better thing that I do than I have ever done. It is a far, far better rest that I have than I have ever known.” Pardon me as I reach for a tissue.

Then in university years I allowed myself to be seduced by the darkness and, in its own way, the romance of Camus, Sartre, de Beauvoir. That whole Existentialist gang that required black turtleneck sweaters, copious amounts of red wine, and smoke-filled, darkened rooms. Fortunately the romance of despair did not last in my psyche.

From that point on, I segued into the worlds created by Victor Hugo (Les Miserables, The Hunchback of Notre Dame), Alexandre Dumas (The Count of Monte Christo, The Three Musketeers), and Gustave Flaubert, perhaps more of a realist, but still I loved his Madam Bovary. Hugo is generally regarded as a key figure in the French Romantic Movement of the 19th Century which influenced art and architecture as much as literature. And Proust. I hear music when I read their words. That could be thanks to Andrew Lloyd-Weber.

In later years, as I spent more time in France and was influenced by locals, I was taken with the poetry of Frederic Mistral, with Marcel Pagnol’s sweet stories (Jean de Florette, Manon des Sources) from the countryside of Provence and a host of other brilliant French writers we could discuss. When there’s more time … but this too is courtly and romantic, in a pastoral sense.

We can’t do more than whisper about the lingering images of the Jazz Age and Lost Years on the Riviera, the Fitzgeralds, Hemingway, Parker, Dos Passos … not French but wished they were … and another post altogether.  Definitely not courtly.

As I mentioned at the beginning, I see romance everywhere in this beautiful country. In the narrow cobblestone streets winding through picturesque villages. In the centuries-old buildings of faded colors, crumbling exteriors with peeling paint, shutters askew. In the secret gardens into which I peek and see cracked flowerpots overflowing with blooms beside neatly planted potagers. In the vines and vivid blossoms of creeping plants that spill along ancient stone walls. In the shimmering azure waves of the sun-kissed sea. My camera shutter steams. Words flow from the visuals.

It’s the romantic lure of the south of France that consumes me. In particular, the Côte d’Azur that hugs the coast of the sparkling Mediterranean. Alive and well are the ghosts of the artists and writers who, through the centuries, found inspiration there from the extraordinary light and vistas and culture. The same that inspires me.

And that’s where I am stuck when I’m in France …  Truly. Madly. Deeply. Is it any wonder I find myself writing romance in France? Life sometimes works in mysterious ways.

I suspect I lived there in a different life. Seriously.

Thanks so much Patricia! You can see why I always say that setting is one of the main characters in Patricia’s novels. And you’re in luck! Her latest, I Promise You This, is coming out on 17 May! You can read the whole gorgeous trilogy at last.

I Promise You This by Patricia Sands

Suddenly single after twenty-two years of marriage, the calm of Katherine Price’s midlife has turned upside down. Seeking to find her true self, she took a chance on starting over. A year later, she is certain of this: she’s in love with Philippe and adores his idyllic French homeland, where he wants her to live with him.

But all that feels like a fantasy far removed from Toronto, where she’s helping her friend Molly, hospitalized after a life-threatening accident. Staying in her childhood home full of memories, Katherine wonders: Is she really ready to leave everything behind for an unknown life abroad? And if all her happiness lies with Philippe, will it last? Can she trust in love again?

Searching her heart, Katherine finds the pull of the familiar is stronger than she thought. An unexpected meeting with her ex, the first time since his cruel departure, and a stunning declaration of love from an old flame spur her introspection.

With sunlit backdrops and plot twists as breathtaking as the beaches of Antibes, author Patricia Sands brings her trilogy about second chances to a provocative and satisfying close that proves that a new life just might be possible—if you’re willing to let your heart lead you home.

more info about Patricia Sands and her books: