Ten: Take care of your shoes.

With ten kids, shoe leather represented a significant investment for my parents. My father had a shoe shine box, and made sure we all knew how to polish our (and his!) shoes. I can still remember the heady fumes of Kiwi brand shoe polish with its little open/shut key on the side, and how astonished my college roomies were when they saw me applying ox-blood red (the ultimate in classy shine) to the one pair of boots I had for all four years.

Nine: Look it up.

Never use one little word when a big one (or two) will do. If we didn’t know the answer, that’s what the Funk & Wagnalls New World Encyclopedia that we bought one volume at a time from trading stamps at the grocery store was for. (We just had to hope the answer wasn’t in volume St-Te because we somehow got two of the preceding volumes instead.) By the end of an average family dinner, multiple volumes would be open on the table.

Eight: “Vacation” is a matter of semantics

Sure, some of his colleagues took their families on ski vacations and trips to Europe. My father crammed kids into the Vomit-Comet and took us to the drive-in for mini rootbeer floats. Every few years there would be a road trip from California to visit the relatives back east. We’d pull into a KOA campground each night, amazing nearby campers with the speed at which we set up tents. What they didn’t realize was that nobody got to go to the bathroom until that was done. Thanks to those road trips, my siblings and I have great memories and strong bladder control. 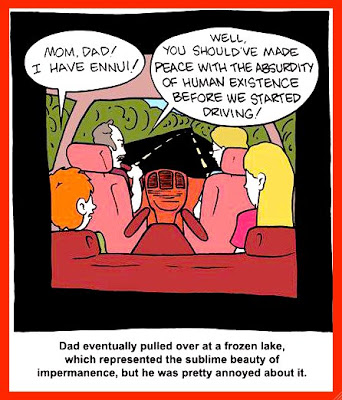 Seven: You say “cheap” like it’s a bad thing.

The winner is the one who finds the gas station where Regular is 2-cents cheaper. Even if you had to spend that much to drive there. This was so ingrained that I was shocked when a date handed me a dollar and begged me to please go to the nearest gas station, just because I’d been cruising on fumes looking for the best deal. I took the dollar and dumped the date.

His eight daughters and two sons had to be able to change a tire, check our oil and water, use (and always carry) battery cables, drive a manual transmission, and hang out in the garage with him while my father fixed everything else on our cars. TV-Dads would come into their TV-daughters’ bedrooms (the ones with the princess light-up phones, frilly curtains, and matching canopy beds that they didn’t have to share with two other sisters) and give poignant, valuable life lessons. We handed our father the wrench, and sat in the front seat to push the brake/gas pedal/ clutch as requested. So far, none of us has ended up an axe murderer.

Five: There is always plenty of food and room for family.

If you rang our doorbell at dinner time and you were a cousin, knew a cousin, or correctly guessed the partial name of a cousin, you were brought in, another plate was jammed into the dozen already set up, and you got the first serving of pot roast. Meanwhile, kids were evicted from the “guest” room and you were urged to stay the night. At least.

This wasn’t our family but scary similar… [image credit: WingsDailyNews]

Four: If you don’t vote, you don’t get to complain.

The “News Hour” was a sacred ritual, ammunition and fodder for the sixty-plus year Republican vs Democrat debate in which he and my mother never missed the opportunity to cancel each other’s vote.

People used to ask how he got all ten kids to go to college. The answer was simple: we all thought that our only choices were go to college or go to Notre Dame. Some people have deer heads or fish as trophies, but my father’s proudest trophies from his victories over forty-plus years of tuition payments were displayed in his case containing mugs from each of our colleges. 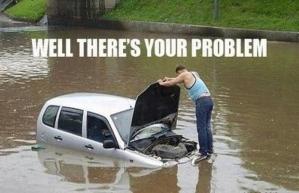 If I was driving home late at night and I saw a couple of cars pulled over, one with the hood up, I could almost guarantee that the second car would be my father’s. It never occurred to him to wait for someone to ask for help. On one of our road trips, our trailer was demolished when we were caught in the side winds of a passing tornado. All of us and what belongings we could salvage were crammed into the car, piled literally up to the roof. We’d been driving across the desert for hours and hadn’t seen a single car in any direction when we passed a car pulled off the road. Of course my father stopped and offered to help. When he couldn’t get their car started, he offered the young couple a ride. They looked at our car in disbelief and told him they would wait for the next car. To the end of his life, my father worried about what ever became of them.

And the number one thing I learned from my father was what to leave behind.

Like most parents, my father worried about leaving an estate for his children. But his devotion to our education ensured that we’d have the tools to build wonderful lives for ourselves. And his legacy of how to be the best possible person, parent, and friend did far more to guarantee a good life for his children than the material possessions he left behind.