I don’t actually have a TV and haven’t been following Team Anything, so in honor of the events in Rio, I offer this Blast From the Past (from my column originally published in Champaign Urbana News Gazette, 1994)

Olympic Competition minus the spandex.

I brought the TV down from the attic and enshrined it in the playroom so my family could cheer our hometown hero, Bonnie Blair, to her latest two Olympic gold medals.

“Mama,” my kids wanted to know. “Did you ever win any gold medals?”

I had to tell them the truth. There are three reasons I never won any gold medals:

At least my mother’s generation had the Queen for a Day show, in which contestants vied to be the most pathetic.

Contestant: “Well, my husband broke both arms and had his legs amputated and just hasn’t been the same since the shock therapy and my child needs an operation to fix her eyes so she can compete for Mini-Miss America and the dog has cancer of the tail and I lost my night job at the sweatshop when I got TB so the bank repossessed the house and now we’re all living in a cardboard box under the freeway overpass. But I always try to look on the bright side of life.”

If the Audience Applause Meter rated her the most pitiful, she won a dryer.

All my generation has is the Pillsbury Bake-Off, and half the time that’s won by some man who probably doesn’t know the first thing about stretch marks. Or dryers.

But if the Olympic Committee is looking for some events to round out the schedule for the next games, I’d like to suggest that they let mothers compete. And it could bring in more sponsors too. Just imagine, The Official Disposable Diaper of Team USA…

For moms who want to get a head start, I have a few tips:

Equipment: Many trainees overestimate the amount of equipment they’ll need to stay competitive. Before you purchase any piece of training equipment, I recommend the PFT (The Pioneer Foremothers Test). It’s actually quite simple: “Would our pioneer foremothers have needed this?” For example, in our house in the last few weeks we have broken and not yet replaced the following items which did NOT pass the PFT—

As I see it, the only essential pieces of training equipment for Olympic Mothering (assuming that the valium wouldn’t pass the drug screening) are a coffee pot, a covered wagon/minivan, and a dependable pizza takeout. For those without a buffalo, I also recommend a microwave.

Training: As any athlete will tell you, the most important element here is your state of mind. For the competing mother, this means GUILT. My friend Susan claims that being the cultural heiress to 3000+ years of Jewish mothers gives her an insurmountable lead. But I think there is still room for the talented amateur who is willing to nurture her neuroses about jobs, pottying, and teen-age sex.

Team Uniforms: How about loose-fitting, tunic length spandex jackets over yoga pants? And pearls, of course.

It’s the moment we’ve all been waiting for—Olympic Mothering as current champions vie for the gold. Today’s distinguished panel of judges includes USA’s Betty Draper, UK’s Queen Elizabeth, and HELL’s Saddam Hussein (who only agreed to appear because of a faulty translation of the phrase ‘The Battle of All Mothers’).

The first contestant is Barb Taub in her breakfast routine. For those viewers unfamiliar with Championship Mothering, in this round contestants perform required moves, and judges issue separate scores for Serenity and Technique. Extra points are awarded if the child involved is a male. However, penalties will be imposed for obscenities, corporal punishment, and visits by social workers.

Barb gets a strong start with the move that bears her name. With the famous Barb Hammerlock, she gets three kids out of bed and dressed for school. Moving smoothly into the required Oatmeal Death Spiral, Barb places each child in front of a steaming bowl. It looks like a perfect move but wait—in the follow-through whining and gagging, she wobbles, and exchanges the oatmeal for toaster pastries.

But oatmeal is one of the most difficult mothering moves, so this may not cost her too much. Like a champion, she heads straight into the school lunches. This is a tricky move—she can lose points both if the lunches are not nutritious and if they are not eaten. But I think she’s nailed it with this one! Chocolate cupcakes laced with ground-up vitamins and antibiotics! The crowd goes wild!

Be with us tomorrow for the short routines in which contestants potty-train two-year-olds while simultaneously enrolling them in Harvard Medical School. And let’s cheer Barb on as she attempts to bring home a gold medal. Or at least a dryer. 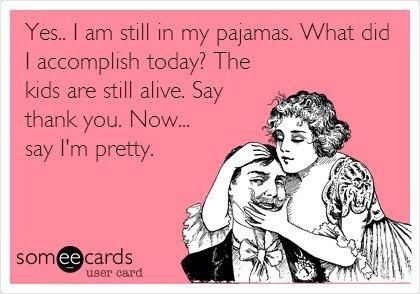