There are three things I know I’ll be doing during November.

November Thing One: Bonfires and Fireworks

I thought I knew how to do fireworks. You wait for the middle of summer, stuff yourself sick on barbecue and watermelon (pickled watermelon if you’re in the South and/or you just want to be even sicker), spread your blanket and settle back for the insanely long wait until the summer sun finally sets. Then you sing The Star Spangled Banner and—as each burst of exploding light races to the heavens before raining down in fiery sparkles—join the entire crowd in a collective, “Oooooohh!” 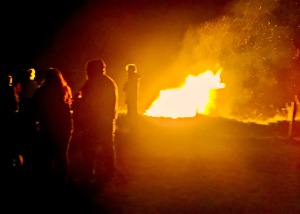 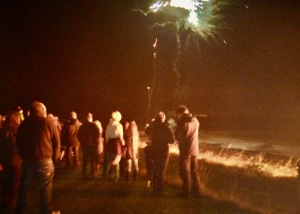 Here in our new home village (Whiting Bay on the Isle of Arran, off the coast of Scotland), we did the exact same thing last night. Well, okay—it was the middle of winter, and shivering people were cupping grateful hands around the hot soup that volunteers handed out. And yes, it was only six:o’clock, it had been dark for hours, and absolutely nobody sang “Star Spangled” anything. BUT they did all “Oooooohh!” as the fabulous display lit the night over the beach, and answering fireworks could be seen in the distance over the mainland. And there was a SERIOUSLY great bonfire that threw off welcome waves of heat and clouds of sparks to rival those in the sky. Kids ran around with sparklers, parents and friends talked, and everyone did their bit to remember. 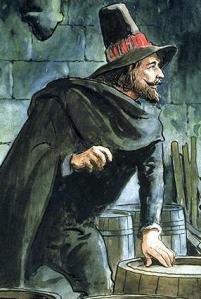 Of course, this November they weren’t remembering a bunch of disgruntled colonists over in America saying “Thanks but no thanks” to King George III back in Jolly Olde. Instead, the holiday dates from a much earlier treason on November 5, 1605, when Guy Fawkes was captured as he tried to blow up King James I and both Houses of Parliament with 36 barrels of gunpowder stashed in the basement. Unlike later American rebels (who got to go home and write up constitutions and bills granting Americans the right to life, liberty, and the pursuit of honking huge guns), Guy was tortured until he revealed the names of his co-conspirators, and sentence pronounced. The gunpowder plotters were to be…

…hung, drawn and quartered in the Old Palace Yard in Westminster.

The Attorney General Sir Edward Coke told the court that each of the condemned would be drawn backwards to his death, by a horse, his head near the ground.

They were to be ‘put to death halfway between heaven and earth as unworthy of both’.

Their genitals would be cut off and burnt before their eyes, and their bowels and hearts removed.

They would then be decapitated, and the dismembered parts of their bodies displayed so that they might become ‘prey for the fowls of the air’.

Guy (or Guido, as he called himself) leaped from the scaffold to his death, breaking his neck and saving himself from the more gruesome execution plans. 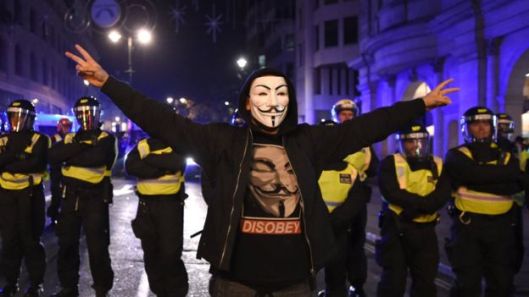 Today, Guy’s conspiracy is commemorated on the fifth of November with bonfires (in which an effigy or “guy” is burned) and fireworks. But lately, Guy has had a different incarnation. His face is the model for the mask adopted by the hacker group Anonymous, who called on supporters to remember Guy’s rallying call that “a desperate disease requires a desperate remedy” by joining in the “Million Mask March” in London.
[Image credit: BBC News]

Tuesday, November 8. I’ve already voted, so depending on how the day goes, I’ll either be celebrating or seeking consolation.

I’m taking part in the National Novel Writing Month, NaNoWriMo. So November blog posts and book reviews will be few and far between. I love each and every one of you, so this isn’t goodbye—just a little vacation. I’ve got a few posts queued up to go, but for the most part—SEE YOU IN DECEMBER!