Thousands Have Lived Without Love, Not One Without Water. – W.H.Auden

For more about how we travel… [click image for previews, reviews, and buy links on Amazon]

So much of India is defined by its relationship to water. It’s a symbol for almost every aspect of life from purity to fertility to spirituality. Rivers are goddesses, while the Ganges is said to promote health, and speed the path to enlightenment. Ancient engineering feats of water harvesting meant the difference between destruction or survival of cities and empires. A common feature of even the earliest temples is the “tank”, the open water pool where it’s customary to take a purifying dip before entering to worship. Even the humblest of restaurants have hand washing stations. Visitors in Gujarat are always greeted with an offer of a cup of water.

So picture, if you can, a soaring temple built over seven levels, all covered with literally thousands of carvings and sculptures—only the temple soars DOWN, with several levels extending further down into the water at the bottom. They were called stepwells, and could serve as a special retreat for a princess, or as a town’s social center. One of the best preserved and most incredible is appropriately called Rani-Ki-Vav, the Queen’s Stepwell at Patan in Gujarat.

Entrance, Rani Ki Vav, The Queen’s Stepwell in Patan, Gujarat, India [This and all photos unless otherwise noted are ©2018 Jayalakshmy Ayyer & Janine Smith]

We’d seen several other stepwells, but were particularly excited about visiting Rani-Ki-Vav. Built by widowed Queen Udayamati in honor of her husband, King Bhimdiva-I in the last quarter of the eleventh century CE, it is perhaps the finest remaining example of Maru-Gurjara architecture’s emphasis on complex, symmetric design. 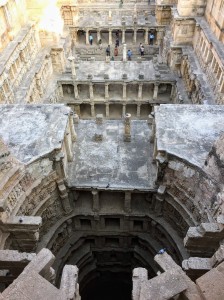 How did it survive over a thousand years? Simple. It was buried. When the River Saraswati flooded and then silted over, only the top of the well remained until it was rediscovered in the 1960s and painstaking excavated by the Archaeological Survey of India. Now a UNESCO World Heritage Site, it draws visitors from all over India and across the globe.

Apparently, they are all coming to take selfies.

You could barely get through the throngs who were taking their own pictures, almost always blocking out and frequently facing away from the treasures displayed. The poor guards’ whistles sounded nonstop as they attempted to keep selfie-takers from hanging off or climbing the sculptures for a better view of themselves.

But apparently the only thing that could distract them was the one missing piece for their digitized composition: women in western dress. “Selfie Madam?” was the incessant refrain that followed us down the stairs. Over the past years visits to India, we’ve gotten used to this plea and have developed a rule: we only pose with children. But…there were a lot of children there.

What did the selfie-takers miss?

There is a secret treasure hidden at the stepwell’s lower level.

If you look across to the far side of the stepwell’s lowest accessible level, you’ll barely see a tiny doorway into the rear tank with its temple dedicated to Vishnu. You can just make out the dim shapes in the dark interior and your selfie camera won’t see this, but Jaya’s telescopic lens found the stunning hidden treasure, a life sized statue of Vishnu. The god has spent the centuries reclining on a bed made up of the thousand-head serpent king Nagaraja and joined by consort Lakshmi, in a beautiful temple surrounded by stunning carvings.

We explored the open side of the stepwell, imagining villagers a thousand years ago visiting the well to do laundry, cool off, or just enjoy a quiet chat with friends. Finally, we started back up. At the top level, the steps were occupied by rows of seated children on a field trip, quietly waiting for permission to head down.

They smiled shyly and waved as we climbed past the kids perched on their stone steps. Indian monuments aren’t like those in the US. There usually aren’t guard rails, barriers, or safety equipment other than guards with whistles. In addition, Rani-Ki-Vav’s access system is unique, with the steps changing direction every few stairs, then a side few steps, and down again. It took the three of us a couple of hours to manoeuvre our way down, view all the sights, and come back up. But at some unknown signal, a hundred children flew straight down five stories to the flimsy barrier at the bottom that kept them from plunging down the remaining levels, turned without missing a beat, and less than a minute later were back at the top. Their culture-box ticked off for the day, they raced to the paths of the surrounding park, and began rolling down one of the hills. I have absolutely no doubt those (admittedly-fine) rolling slopes will be their only lasting memories of their visit.

And when you think about it, that kind of beats all those selfies.

“Rani ki Vav bagged the title of “Cleanest Iconic Place” in India at the Indian Sanitation Conference (INDOSAN) 2016 in New Delhi in October 2016. The monument was felicitated at the conference, inaugurated by Prime Minister Narendra Modi.”—India News (I can’t really explain why I find this so fascinating…)

Just blocks from the Queen’s Stepwell in Patan, we toured the Patola House Heritage Museum. We met several members of the Salvi family, who have been weaving the incredible patterns of the double-sided Ikat silk saris known as the Patola Sari for over 35 generations. Each sari takes five people eight months to complete according to techniques passed down through the Salvi family. Recognized around the world as a master artisan, Patola master weaver Bharat Salvi has received many awards and recognition, including being invited to display and demonstrate his craft at the Smithsonian Institution in Washington DC. We noticed that many of the patterns used were strikingly similar to patterns carved into the walls of the nearby Queen’s Stepwell.