Hamburg is supposed to be lovely this time of year. I wouldn’t know.

“Meet me in Hamburg,” my travel buddy Jaya said. I was pretty busy but she played her ace card—an adorable baby grandson I haven’t met yet.

When I went to book my flight, I was blown away by the incredibly low prices on one of the famous budget airlines (which I totally won’t tell you was RyanAir because I don’t want them to sue me…). But here’s the thing. I travel a lot. So I was pretty sure I knew how to buy a plane ticket.

I hate it when I’m so wrong. As soon as I booked the trip, the upselling started. Did I want a rental car? Airport parking? Trip insurance? Hotel? Bus pass? Entertainment? Was I planning on bringing any luggage larger than (one) purse? Did I want food, a seat, or air to breathe? All extra.

It was only going to be an hour and a half trip, so I decided to ignore all the offers. My flight was out of Edinburgh Airport, but the extra half hour drive seemed worth it for that fabulously low fare. Although I left home at O’dark:thirty with plenty of time to spare, there was a surprising amount of traffic. I arrived at the airport with only 45 minutes until my flight. No problem. Since one of the few bits I’d bothered to read among the sea of upselling was that not-RyanAir would charge an additional €50 for anyone who didn’t check in online, I already had my boarding pass, assigned seat, and purse.

So with boarding pass in hand and the clock ticking, I headed straight for Airport Security. On the way I passed a sign reminding passengers to get their visa check, but I ignored it because Americans don’t need visas for EU countries. The Security check is a remarkably well-organized and quick process at Edinburgh Airport, so minutes later I was looking for my gate on the Departures Board. I arrived at the gate as they were already boarding the plane, so I congratulated myself on being such an efficient traveler.

And that’s when the gate agent looked at my boarding pass and frowned.

Agent: “Did you get the visa check?”

Agent: “But you have to get your visa check.” She pointed to a small line at the top of my boarding pass that said, enigmatically, ‘visa check’.

Me: [I tried again to explain that no visa check was needed, because no visa was needed. When she looked at me blankly, I repeated this information in smaller words, finally stopping myself when I started talking like Tarzan on speed: “Have ticket. Have passport. Don’t need visa.”] Please?

(Unconvinced) Agent: “I can’t let you board this plane.” Instead, she informed me, I would have to go back out through security, downstairs to the ticketing desk, have them verify my non-visa status, come back up through security, and not get on the plane because it would be long gone.

Me: “Wouldn’t it be easier for you to just look at my passport and boarding pass, have me prove that I can stuff my little purse into your proper online purse-sizing bin, and use the empty seat I’ve already bought?”

Agent (with all the enthusiasm of a gate agent who has just been told it would be a lot easier to just let me board with my purse-sized crate of automatic weapons and box cutters): “No. You should leave now.”

Me: Great! When does it leave?

Desk Agent: In two and a half days.

So I did what any savvy, sophisticated, experienced traveller would do. I cancelled my hotel, told my friend I wasn’t coming, and cried my way through the better part of a carton of Ben & Jerry’s Peanut Butter Cup ice cream.

But all was not lost. Since I was already in Edinburgh, I decided to have another go at picking up a ceiling light at Georgian Antiques. 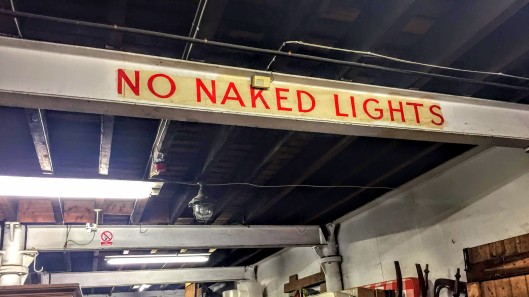 The first thing I saw was a warning that their lighting fixtures needed to keep their kilts on. 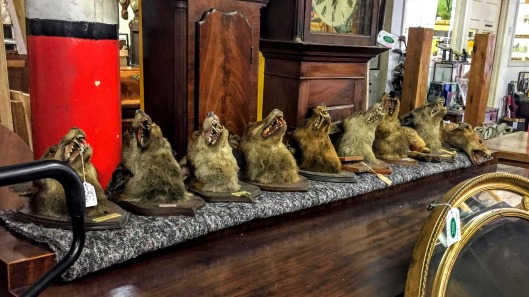 Then I saw a row of decapitated wolf bits.

Although I now know where to go for all my dead wolf needs, I got the distinct impression that the universe was trying to give me a message. Probably involving staying in bed, preferably with another carton of Ben & Jerry’s best.