You can ride out the heatwave like James Simon on his $100 million super yacht this week (in Brodick Harbour, Arran Scotland) or…

It was late when I got the call saying my daughter in London was ill and needed granny help with the two-year-old. Luckily, our wonderful local kennel allowed me to bring the dog straight over so I could catch the early boat off the island next morning. 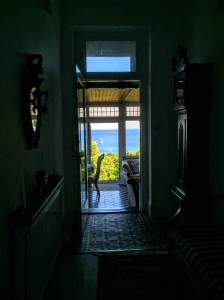 The Scotland summer calculus: keep doors and windows closed (death by steam) or open them (death by midge)?

We were in week three of the heatwave that had us sweltering even on our little island off the coast of Scotland. Yes, it’s true that in general Scots are a tough and hardy breed. Over the centuries, they’ve withstood Vikings, the English, cold wet winters where daylight lasts about four hours, and people who try to spell whisky with an “e”. It’s heat they can’t handle. Oh sure, that first sunny day where temps soar to 65F/18C, it’s taps aff and disturbing amounts of pink flesh on display. But after that, a kind of desperation sets in. What if we run out of water? What will happen to the sheep, the garden, and (gods-help-us) the whisky?

Both my daughter and I tried until late that night to book any kind of London lodging, but every place we tried had the same story: fully booked for the weekend. Despite the heat, it seemed half the planet needed to be in London to attend—

When I got up early to give my hanging baskets and garden a preemptive soak before leaving to catch the ferry, the sun already had hours to blaze against a bright blue sky. On the mainland, I took the train to Glasgow and that’s when I started to get worried. Crowds of people were actually queued up waiting to board. Inside the train, it was almost impossible to get through the cars for all the suitcases that overflowed the little racks and now lined the aisle.

The individual seat reservation screens were offline, and people stood filling the aisles, staring enviously at those with seats. Voices had ceased to mutter “Sorry” and moved to outraged coughs and explosive “EX-CUSE-ME!”. I located my reserved seat—at a coveted 4-seat table with a power outlet—and informed the young man who already had his phone plugged in that I had a reservation. He pretended he didn’t hear me over the sound of his earphones, a strategy which probably would work on most of his countrymen. Unfortunately for him, there were three things he was about to find out.

I poked him and we mimed the following exchange. I opened the bidding by gesturing to the seat, then to myself. Mine. He pointed to the blank reservation screen. Possession is aces. I saw his reservation screen and raised him one assigned seat ticket. Full house. His three mates who were also sitting around the table sniggered.

That did it. Teachable moment. I raised my voice and told them their MOTHERS would be ashamed of them if they didn’t offer their seats to the pregnant lady and some of the older people standing in the aisle. I don’t know about the rest of the world, but no young men in Scotland could possibly withstand the double threat of shaming their mother AND being addressed in public. They left their seats and the train car. I strongly suspect they left the train too. Possibly they changed their names and emigrated to Canada.

As the train rolled down through Scotland, it became obvious more than the reservation system was offline. The air conditioning, perhaps overwhelmed by the combination of hot weather and packed train cars full of standing passengers, quietly gave up. The air got stuffier. Babies cried and children whined. Even hotter. The windows didn’t open and people couldn’t make it to the bathrooms. Inevitably, the first person threw up. It was like those rows of dominoes that make patterns as each topples the one next to it. Barf dominoes rippled through the car.

By now, my tablemates were a middle-aged mother and her two older teen children The brother had been smirking as his older sister neatly redeposited her lunch into the plastic bag it originally occupied. Then his face turned a lurid green and he desperately grabbed the baseball cap from his head and held it to his mouth in the nick of time. His sister was pretty gracious under the circumstances. She simply held out her lunch bag for the hat.

I don’t think the Pilgrims who spent two months sailing from England to the New World could have been any happier to step onto terra firma than the occupants of that train when it finally reached London.

(My heart does, however, go out to the unsuspecting passengers scheduled for the return trip…) 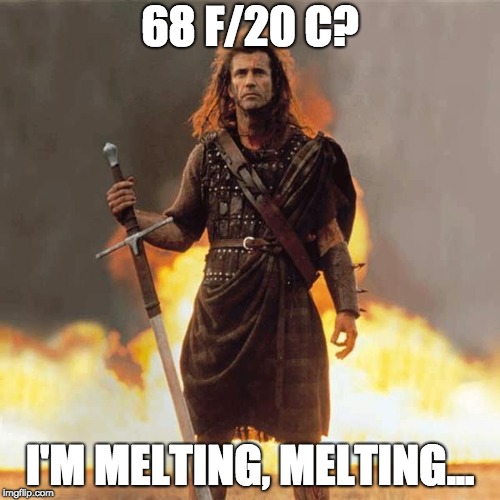