“Want to come to the Emmys with me?”

My daughter called me a few weeks ago from New York, where she’s head writer for a hit TV show, Full Frontal With Samantha Bee, which had collected a batch of nominations for both weeks** of the Emmys. At first I wasn’t sure if I could accept. (What if they find out I haven’t had a TV in twenty years? Will they even allow me into California?) But a quick google-check revealed there would be $30-thousand gift bags. I was SO in.

**[NOTE: If you’re like me—and the other 99% of Americans—you had NO idea there are so many Emmy awards they have to hand them out over two weeks. Of course, they save the sexy ones like “Best Supporting Actor In A Comedy Documentary Short That None Of Us Actually Watched But We Heard Was Super Good” for the second show which is actually televised. On a Monday afternoon. Stay tuned for more on why…]

But I did find out some fun facts, which I’ll be sharing in my next post in the form of a contest. The winner will get some fabulous prizes like my used Emmy tickets (only a bit folded up because women’s evening bags are just slightly smaller than a pack of cigarettes which you can’t even smoke anyway but don’t worry because of the free joints. More about that later too…). Or maybe something even better given the results of Prop 64. Not likely, though, because I didn’t want to get arrested trying to take it onto the plane. (I’ve seen those adorable little furry narcs at Heathrow.)

Actually, this is Jessie, and I’m TOTALLY safe from her because she’s trained to sniff out the ink used on smuggled cash. But I’ve raised four kids, and their ability to tell when I was carrying any cash at all makes Jessie look like an amateur, not to mention ensuring that I have no cash left to smuggle… [Image credit: Standard]

After thinking it over for at least a nanosecond, I agreed to join my daughter in Los Angeles and looked up ticket prices. Last minute airfares from Glasgow, Scotland to Los Angeles, California are not for the fainthearted. Just when I was wondering how much I could get if I hocked the family silver (answer: what family silver?), I came across an advert for budget WOW Airlines—motto: “We charge extra for water.” Apparently, if I was willing to travel with just some spare undies stuffed into my purse, I could just about afford the airfare.

“Black tie,” my daughter said. “And…  There are parties.”

Now, you have to understand. When I sneaked out of my executive office some years back, I got rid of all my suits, dresses, matching shoes, and bags. I threw out all my makeup, and said a wrenchingly difficult goodbye to the man in charge of my life—my hairdresser, Antonio.

“Ah,” I said. “Maybe I can buy something at one of the charity shops once I get to LA.”

“Rent the Runway.” My daughter explained about internet businesses who rent designer clothes, along with accessories and even jewelry. “Plus you should book GlamSquad to come to your hotel for hair and makeup. And eyelashes. You really should get the eyelashes.”

I actually got to California a bit early to visit family before checking into the Hotel Intercontinental, where my daughter had booked me a room on the 58th not-for-those-with-vertigo floor. The room was amazing, with a two-room ensuite bigger than many places I’ve lived, and (much more important) great mojitos and really superb wifi.

My rented dress arrived on schedule. Dresses, actually, because they sent two sizes of the one I’d ordered, and an emergency backup gown in a different style—the only one that actually fit. So all I had left to do was wait for Jane and Glen from GlamSquad to arrive for makeup and hair.

Neither of them could possibly travel on WOW Airlines. In fact, with the amount of stuff they lugged into my hotel room, I don’t think they could fit the first class baggage restrictions for the major carriers either.

First up was Glen for what GlamSquad calls, with no shame, a Blowout. He discussed very seriously what we should do with my hair before blow drying it into its usual style, applying unnecessary hairspray, and leaving.

While he worked hard to make me look the way I do every day, Jane had set herself the opposite task. It was a monumental effort (including those eyelashes!) but she never faltered, even when confessing that it was going to take a LOT more time than she’d budgeted. She must have known what she was talking about, because as far as I could tell, every single drop of makeup she troweled onto my face was still there in basically the same shape fifteen hours later when I was finally heading to bed.

Jane from GlamSquad, offering her selection of makeup and eyelashes.

It was early afternoon when I and the other plus-ones were supposed to report to the lobby for our ride to the event. (The studio had already sent those nominated for awards ahead to leave plenty of time for red carpet photos and interviews.) At last our driver pulled up for the four-minute drive from the hotel to the Staples Center.

Of course I had suggested making the 12 minute walk. But I’ve been away from Los Angeles for a long time. I forgot in LA your vehicle IS your identity, and the only people on foot are probably either lost foreign tourists or those looking to share news of their personal savior (religious and/or pharmaceutical). You’d think I’d suggested crossing the Sahara barefoot. Jane said my makeup would melt, and the eyelashes fall off. Our very nice handler from the studio said she didn’t think there was an entrance available to pedestrians. My daughter said I’d get lost. (To be fair, she was probably right as I suffer from a congenital lack of anything remotely resembling a sense of direction.) I got in the limo. 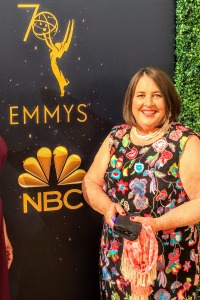 We pulled out into LA traffic. An hour and a half later, we still weren’t at our destination. Our “dates”, already past the red carpet, were all texting, asking where we were. That part was easy, because you could pretty much see the Staples Center from the car at any point. Finally, in desperation, we told the driver to stop, and ran into the parking garage. Luckily one of our plucky band of plus-ones (doesn’t that sound like a bad lounge act?) knew the way, and led us through the maze of parking until the studio’s handler took over. She told us to get out our tickets, and ushered us through the maze of entrances until we reached the red carpet, which was confusingly gold this year. The people at the entrance scanned our tickets, and we stepped onto the carpet.

I’d made it to the Emmys.

Next: Part 2—How to win an Emmy. Or not… And what about those $30K gift bags? And that contest?