It all started with a terrific breakfast.

Dawn was beautiful along the beach where India’s eastern coast meets the Bay of Bengal. The fabulous breakfast buffet helped us forget about the cancellation of the dance festival we’d planned our entire trip around. And—because we’re t, , , such sophisticated travelers—it actually worked. Especially the part where we realized we could have that breakfast again the next morning.

Properly fortified, we headed off to tour the Sun Temple.

The Sun Temple at Konark is a UNESCO World Heritage site built in early 13th century CE. Located on east coast of Odisha, India, this Hindu temple represents the pinnacle of Kalinga temple architecture. Its unique design is meant to invoke the image of the Sun God’s chariot as it crosses the heavens, pulled by seven monolithic “rainbow” horses representing days of the week and surrounded by 24 massive wheels (which also serve as sun dials).

The Sun Temple was designed to allow the sun’s rays to pass once a day straight through the pillared Nirtya Mandapa (dancing hall) at the top of its huge stone platform, on through the Jagamohana (gathering hall), and onto the floating idol in the sanctuary of the towering (now-destroyed) Deul. Supposedly, the Sun God’s idol in the deul floated in mid-air due to a massive magnet. One legend has it that Christopher Columbus destroyed the magnet, causing the idol to fall and be destroyed.  [Image credit: Wikimedia Commons]

When you arrive at an Indian tourist attraction, the decision on whether to hire a guide is only one of many you’ll need to make (along with how long Western feet can go barefoot on hot flagstones when required to shed shoes at temples, if you should be the ONLY one in all of India obeying the NO PHOTOGRAPHY signs, and how much toilet paper you can stuff into your pockets for the western toilet you really, really hope is there somewhere).

Our general experience is that hired guides spend most of their time reprimanding us. “This way Madam. Madam, look here. Madam, come come. Madam I am telling you…”—by which point Madam has either wandered off to take pictures (Janine), actively interrupted his script by asking random questions (me), or lost all patience and started giving the tour herself since she clearly knows a LOT more history, better stories, and English (Jaya). Our usual technique has been to read up on the history and significant features before arriving at a site. But if it’s large, if the signage is nonexistent, and if the architecture stunning, we might opt for the guide. We have yet to find any reason to be glad we did so, and this trip proved no exception.

We arrived at the Sun Temple on the day that Konark was officially the hottest spot in all of India. Our new English-speaking guide’s first job was to find a stall where we could buy a sun umbrella so Janine and I didn’t die of sunstroke before we saw the temple. He brought us to his friend’s booth, who proceeded to unfurl the scariest bumbershoot ever. It was a rusty black object covered with bird poop, and opened in a cloud of dust to display actual spiderwebs and dead bugs. I screamed, Janine scrambled away, and Jaya herded us to another booth selling children’s umbrellas.

Five minutes later I had a green and orange striped umbrella—complete with embroidered stars and little mirrors, thank you very much—and we were good to go. Or we would have been, if our guide did, in fact, actually speak English. Jaya, who attempted valiantly to communicate with him, later confirmed that he also did not appear to speak Hindi or any of the handful of other languages she tried.

Still, he did manage to convey a few ‘facts’:

Our guide managed to convey that half the round carvings in the spokes of the wheel depicted daily activities, while the other half were devoted to ‘kama sutra’ of the night. It’s not clear when actual sleeping occurred…

We saw a magnificent stone horse on a raised plinth out in the garden. Janine wondered aloud if she could get a picture of the horse, and I told her to go ahead and climb the stairs, because I was sure the “Do Not Climb Monument” signs meant she should not climb onto the actual horse. A moment later all hell broke loose as whistle-blowing guards raced for her. I asked her if she at least got the picture, but she says she was busy not being arrested. Some people just won’t take one for the team…

“Senior citizens should not be allowed on stairs.” Overheard by Jaya as she climbed the steps to the dancing hall. 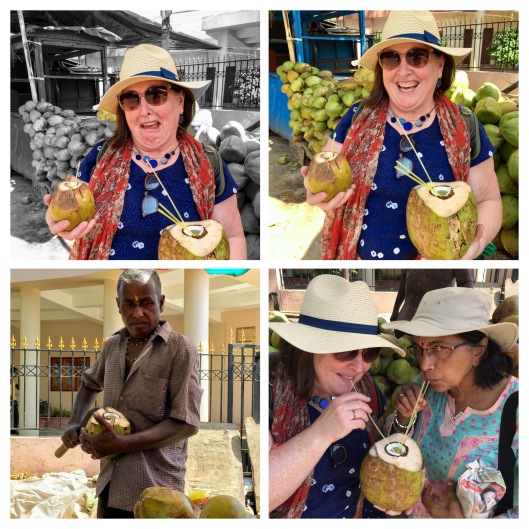 By now the sun was at its peak, and crowds had disappeared. We decided to stop for some tender coconut water. But, as I learned, all coconut is NOT created equal…

At this point, if we’d had a thermometer, I’m sure it would have done one of those cartoon explosions. Seriously, we were in fry-egg-on-sidewalk mode. (If one would ever contemplate such a thing in a country where sidewalk space is frequently used as a cow toilet…) Luckily, we found ourselves in front of the Interpretation Center & Museum. It was a life-affirming experience. Was it the beautiful exhibits thoughtfully displayed to enhance our understanding of the Sun Temple? Was it the movie in the auditorium explaining their version of the Temple’s history (for the most part, an entertaining collection of the legends from the thirteenth century)? Well, er… Actually, we sat through the entire video—twice—and were seriously considering a third viewing because of the museum’s crowning feature: its superb air-conditioning.

We followed our museum experience with lunch in their restaurant—selected based on , , the “Air Conditioned!” sign on the door—and had a blissfully cool and totally forgettable lunch served by waiters in purple shirts and what looked like cardboard Burger King crowns. Nobody mentioned the crowns, so we just figured that the wonderful people who allowed us to eat in their Air-Conditioned restaurant could wear whatever they wanted.

We had a choice at that point about whether to go to the Archaeological Survey of India’s excellent museum or visit a temple our driver knew of that had the skeleton and jaws of a gigantic shark which washed up there. Easy decision. (It was a great shark!) 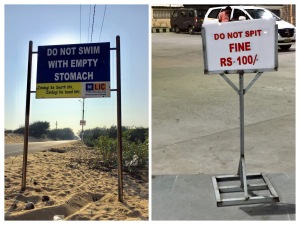 Stopping only for photos of irresistible road signs along the way, we arrived back at Lotus Eco Resort for our final night there, already looking forward to a leisurely breakfast the next morning before heading to our next stop in Puri. That’s when the manager told us that Puri would be closed the next day for a general strike. India (or at least the bit we were in) would be closed.

Since we were supposed to be staying in Puri, our only option would be to leave before five AM the next morning; meaning not much sleep and—care of the strike—no chance of repeating that great breakfast.

We rose next morning at 0:dark-thirty and headed a parade of porters down the dirt track to waiting car and driver.

On the road by 6AM, we peeled out for Puri.

Okay, first we stopped for chai. Then it was foggy, so our driver had to drive reeeeeeeally slowly. Then we stopped completely because our driver wanted us to take “selfie” of of the empty road with its avenue of trees.

But then we totally peeled. Okay, we crawled, slowly, because it was still so foggy. And because we needed to stop to get bananas.

But we finally arrived in Puri, having made the one-hour drive in a record (for us) three hours.

Empty coast freeway to Puri: you have to understand—they take their strikes VERY seriously in India. We’ve been stopped by strikes on most of our earlier trips, so we knew the drill. Roads, restaurants, and all shops are closed. If you drive, your insurance won’t even pay out for accidents (possibly at the hands of irate strikers) and cars couldn’t even be on roads between 6AM and 6PM. India is closed today.