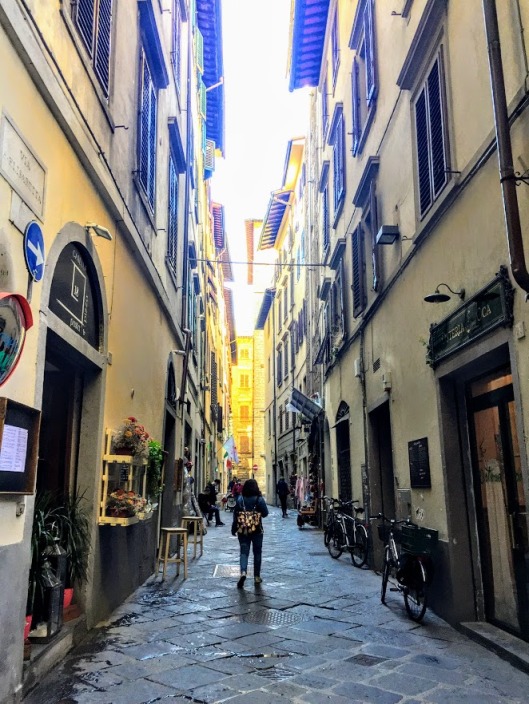 One morning walk through streets of Florence. Mask on, no interiors. 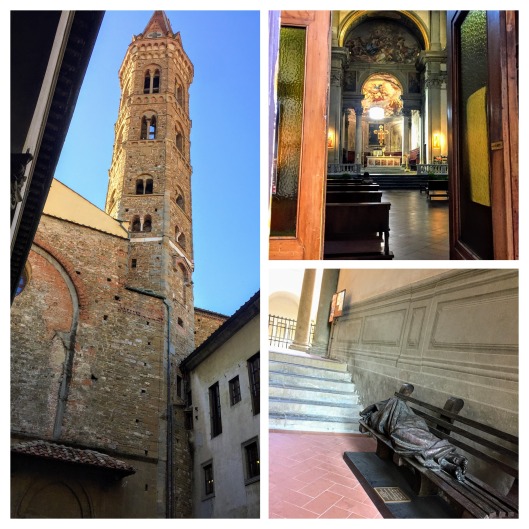 Badia Fiorentina, the little church founded in 978 and located around the corner from Dante’s house, and where he is supposed to have first seen Beatrice, his lifelong muse (platonic, as there is no record that he ever even spoke to her before her marriage and young death). The bench in the entry contains Homeless Jesus, sculpture by Canadian sculptor Timothy Schmaltz, 2019

Piazza della Signora, the center of Florence. 1. Clockwise from top right: group of statues including Hercules and Cacus, by Bandinelli (1533), The Rape of the Sabine Women by Giambologna (1583), Perseus with the Head of Medusa by Cellini (1554), Medici lions, by Fancelli and Vacca (1598) 2. Fountain of Neptune by Bartolomeo Ammannati (1575) 3 & 4. Palazzo Vecchio, Town Hall of Florence (begun 1299) 5. Copies of Michaelangelo’s David and Donatello’s Judith and Holofernes guard the doors of Palazzo Vecchio, 6. The Equestrian Monument of Cosimo I, bronze statue by Baccio Bandinelli (1594) 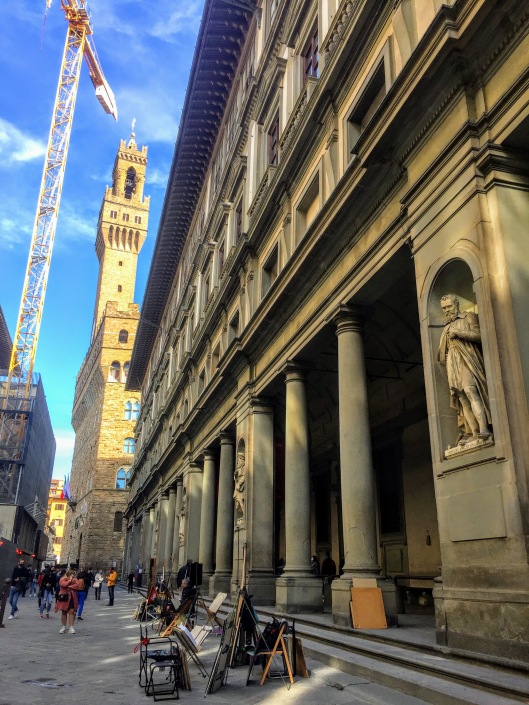 Michelangelo’s statue seems unimpressed by the scaffolding and cranes doing reconstruction in the iconic central courtyard of the Uffizi Gallery. Commissioned in 1560 for Cosimo I de’ Medici, the Uffizi defines all things Renaissance, with works from… well, everyone. Sandro Botticelli: Primavera, The Birth of Venus, Adoration of the Magi of 1475 and others. Michelangelo: The Holy Family (Doni Tondo). Leonardo da Vinci: The Annunciation, Adoration of the Magi . Piero di Cosimo: Perseus Freeing Andromeda. Albrecht Dürer: Adoration of the Magi. Raphael: Madonna of the Goldfinch, Portrait of Leo X. Titian: Flora, Venus of Urbino. Parmigianino: Madonna with the Long Neck. Caravaggio: Bacchus, Sacrifice of Isaac, Medusa Artemisia. Gentileschi: Judith and Holofernes. Rembrandt: Self-portrait as a Young Man, Self-portrait as an Old Man, Portrait of an Old Man. 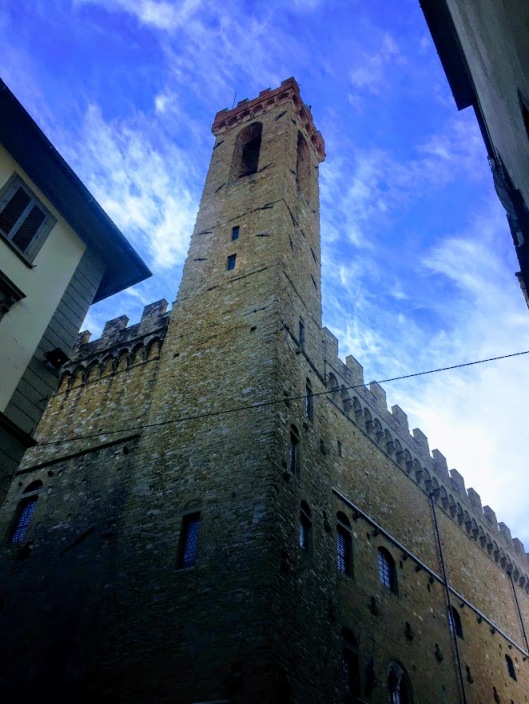 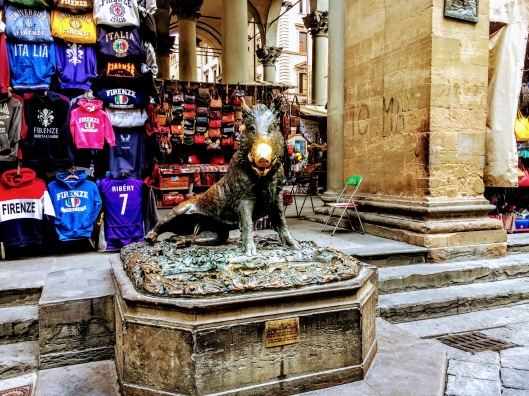 Il Porcellino (Italian “piglet”) is the local Florentine nickname for the bronze fountain of a boar. Visitors place a coin in the mouth of the boar, and rub its (perpetually shiny!) snout for luck. The fountain figure was sculpted and cast by Baroque master Pietro Tacca shortly before 1634 (after a Roman original brought to Florence by the Medici). The version in Mercato Nuovo is a copy, with original in Museo Bardini for safekeeping. 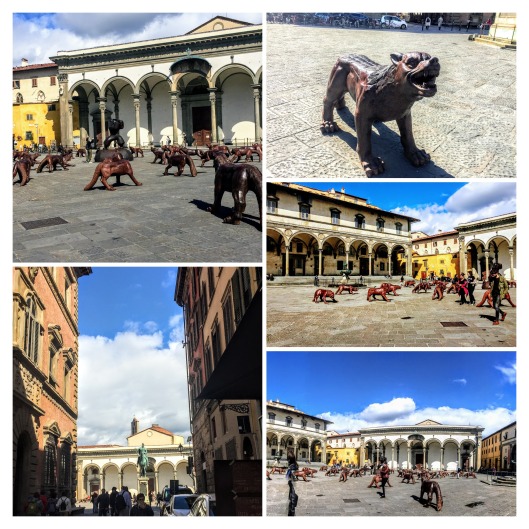 Wolves are Coming. (Installation #1) Spedale degli Innocenti, an orphanage designed by Filippo Brunelleschi in 1417 which has pretty much operated as some kind of children’s home through the present day. According to FeelFlorence, ‘It’s “Wolves are coming“, monumental installation by Liu Ruowang, set right in front of two Renaissance symbol-buildings: Pitti Palace and Spedale degli Innocenti, starting point for a double confrontation. The pack of wolves (a hundred iron elements) threatening the powerless warrior is an allegory of nature’s response to the devastation and predatory behaviour of man on the one hand, and it is a criticism of the values of civilization on the other one.’ 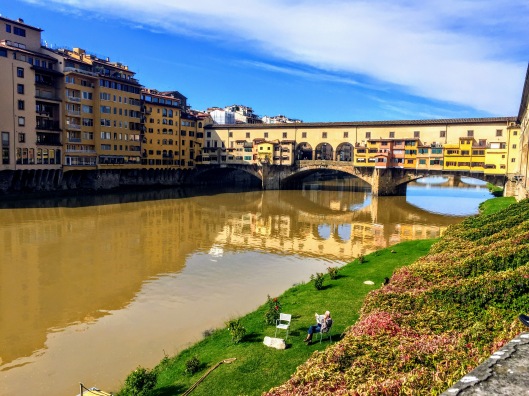 The Ponte Vecchio (“Old Bridge”) is a medieval stone closed-spandrel segmental arch bridge over the Arno River, and lined with shops (mostly gold and jewelry today). 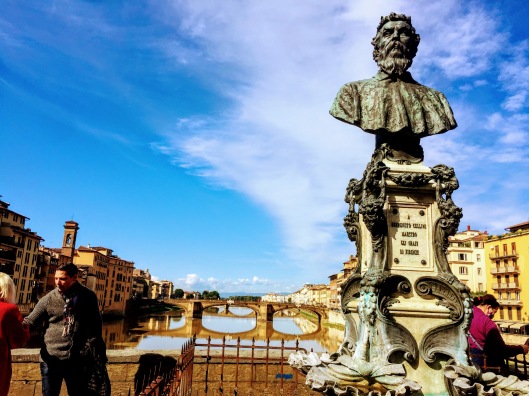 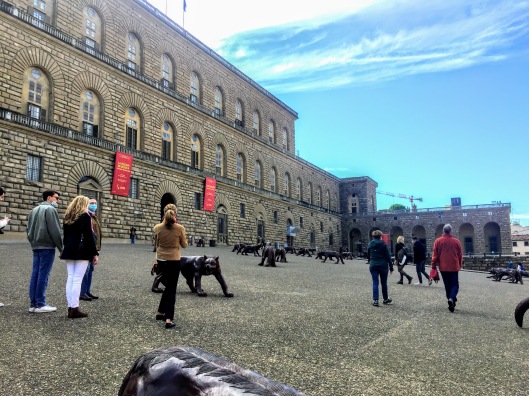 Wolves come in all shapes and sizes…

16 thoughts on “Florence, view from a mask. #travel #Italy #WordlessWednesday”