Contemplating the nature of socks.

I sat on the bed considering the necessity of socks. My back and right leg had been hurting but I didn’t really pay much attention until the day I couldn’t bend my leg enough to put my sock on my right foot. Perhaps, I thought, the sock was merely a vestigial accessory? Kind of like neckties, the appendix, the Electoral College, or Mitch McConnell? Then I looked at the weather report and made a doctor’s appointment. (Because, unlike socks, none of those things will keep me warm in winter. Unless you count how hot I get yelling at Mitch on the news…)

Only, here in Italy, you don’t just pop over for a quick scan. After some weeks, I was clutching my written invitation outside the Instituto, chatting with a friendly doorman who didn’t speak a word of English, which was approximately how many words of Italian I’ve mastered. I think we discussed something starting with “P”. It might have been the weather forecast (previsione), the shocking cost of decent parmesan (parmigiano) or even the Pope (Papa). He took my temperature, gave me one of those little numbered tickets they hand out in butcher shops, and waved me over to join the line of people on socially-distanced chairs in the park across the street.

Once my number came up and I finally got inside, the Instituto itself was amazing. Beautiful high ceilings towered over carved paneling, marble floors, and mid-century framed paintings. A dozen women dressed in what looked like theater usher uniforms were waiting to personally accompany each patient. After waiting in a line to transfer a significant portion of my children’s inheritance to yet another uniformed gentleman, my personal usher escorted me to the future.

It was really just downstairs, but everything was blinding white and super high tech. My perky usher mimed putting all my possessions into a (bright white) locker before she turned me over to the white uniformed denizens of Futureland. Unfortunately, C3PO and fellow communication droids must have been on a break, because the remaining space aliens in huge white hazmat suits struggled valiantly to communicate with the foreigner, now without benefit of the Google Translate app on my lockered phone. Finally one pointed to the table and offered, “Signora, get into the lying shape and go belly up.” (I suggested they might want to avoid telling that to future American patients.) 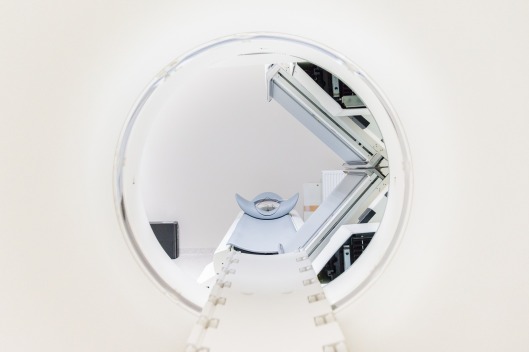 “Get into the lying shape and go belly up.” –How to MRI.

It wasn’t that I didn’t know what to expect. A friend said she could feel the metal plates in her skull (from brain surgery) being pulled by the magnets. Another friend warned me the MRI machines were really loud. Still another said when she was getting a scan for what turned out to be auditory hallucinations due to a rare form of migraine, the noise came to her as loud orders to “FART! FART! FART!” She did her best to comply.

One of the space aliens handed me a little remote with a red button to push in case I ‘feel inside fear’ and we were off! Accompanied by the earsplitting sounds of an interstellar engine in the throes of giving birth, my table slid forward and back. Now, I DO NOT do caves. No way. But, as it turned out, a blinding bright room populated by space aliens and earsplitting cacophony was SOP from my years parenting teenagers, so I never needed to push my fear button. Who knew?

I left the Instituto with my precious envelope of DVDs containing the movie debuts of my various spinal, hip, and knee joints. [Stay tuned! Definite contender for this year’s Oscars!] A week later, my doctor explained how one of my spinal discs had gone rogue, and was making a herniated escape attempt via the large nerve to my leg. To my relief, he recommended we try physical therapy instead of surgery.

And that’s how Alessandra came into my life. To look at her, you’d see an adorable little person, with bubbly optimism for the task ahead. She’s optimistic, bright, and enthusiastic. But the medical mask covering her beautiful face actually hides her true identity—The Queen of Darkness—as she ruthlessly runs me through the tortures of the damned, inquiring cheerfully about how much better she’s sure I’m feeling. And she’s just so damn cute that I lie every time and tell her I’m great.

And then it happened. This morning, I bent down and pulled on my sock. It took space aliens, the Queen of Darkness, and a surprising portion of the population of Florence to get me here, but… SOCKS ROCK! 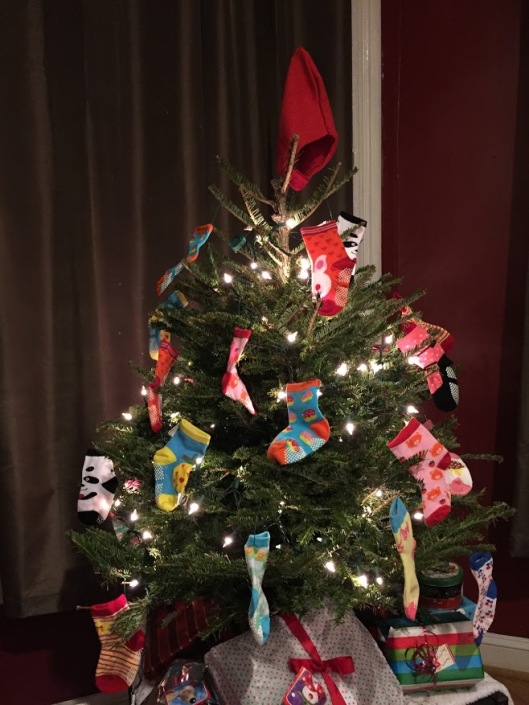 Socks. What could be more perfect? (A tiny little Christmas tree from my granddaughter’s first Christmas.)