[Note from Barb: Read on to find out why this year’s horror show makes these from a few years back seem like a day at Disneyland.]

I’m a total wuss when it comes to horror anything, so I do my level best to avoid it. The shower scene from Psycho? Any movie involving a chain saw, doll that comes to life (to any sound effect other than Sugar Plum Fairy theme), clowns, sharks (swimming or tornadoed) or the word Halloween? Never watched a single one. Never will.

About the scariest I go for in Halloween viewing is the Midnight Margaritas scene from Practical Magic. Or the Republican National Convention.

But here it is October, and my family’s viewing choices naturally veer toward teen-puree. Well, okay. One does not, I told myself, necessarily need to see vast numbers of teens get turned into tomato soup in the creepy basement in order to form opinions on the genre.  [cracks knuckles, opens the blinds, turns on all the lights, does preventive check of both showers, puts on some holiday-themed Tchaikovsky, and makes sure we really don’t have a basement that I’ve just forgotten about. Ready.]

When it comes to YA horror, there are a couple of essential tropes: 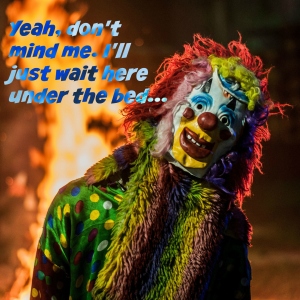 Why horror movies don’t scare me any more.

The night before last, the Hub and I woke to a sound straight from the nightmares of any homeowner.

For a minute, neither of us said anything, hoping we were still dreaming.

Even for Scotland, there’s been a LOT of precipitation lately. I don’t want to cause panic, but I’ve heard people in kilts have been shoving pairs of animals out of boats loaded with emergency supplies (whisky) and lifesaving equipment (again, whisky).

“Is that rain?” the Hub asked hopefully. “On the outside of the house where it belongs?”

“You didn’t happen to move the bathtub into the next room and forget to mention it to me?”

Without looking at each other, we crept into the next room. Water streamed down the walls, pooled on the (new! sob!) wood floor, puddled in the remains of the fallen curtains and blinds.

And that’s why I don’t mind horror movies anymore. (Unless there are clowns. Because…clowns.)