[NOTE: On our first post-Covid trip back to India in three years, we are traveling in rural India on their Republic Day, so I’m reposting our pre-pandemic brush with fame. Happy Republic Day to all my Indian friends!  🇬🇭 ]

Coconut juice on Ganpatipule Beach. As Google reminded me, for much of the past decade on Republic Day, I’ve been adventuring in India with my friends Jaya and Janine. Google reminded me with this photo of that last pre-pandemic visit, when I was finding instant celebrity in Ganpatipule. The years before that included beach sunsets in Odisha, mountaintop temples in Rajasthan, paddling between crocodiles at a bird sanctuary in Karnataka, crashing a wedding in Gujarat, a dawn escape from a Delhi facing security delays due to a visit from then-president Obama.

I invite you all to join in a virtual trip back to three years ago. Our packed days played out against news reports of a growing threat from a new virus in China, but none of us knew we were traveling on borrowed time.

Are you famous? Do you want to be?

In my case, the Kardashians don’t need to worry. Prince Harry’s book will get a gazillion more click-throughs than mine ever will. My daughter’s cats’ Instagram account will always top mine. [Actually, almost anyone’s Instagram would beat mine because I only joined so I could stalk my children. But despite the fact that I have put up a grand total of zero posts, I still have lots of followers. My theory is they find my complete lack of material soothing…]

And that’s okay. I’ve never wanted to be so famous I could only go out in disguise. I am totally fine with not having to worry about the paparazzi going through my trash. And anyone tapping my phone or email has surely died of boredom by now.

Well, I found out. And you can too. Here’s all you have to do:

Step 1: Go to the most rural part of India you can (kind-of) pronounce.

Step 2: Be a foreigner. Bonus points for being white and/or female.

That’s pretty much going to nail it, as we discovered yesterday. All week we’d been seeing groups of children practicing for their part in celebrating India’s 71st Republic Day. As we drove toward Ganpatipule in the state of Maharashtra on India’s west coast, we saw school groups dressed in their best uniforms in preparation for the celebration (despite the fact that it was a Sunday).

It wasn’t until we’d almost passed through the town of Jadhavwadi that we saw one of the celebrations just starting. Children were lined up along either side of a large playing field, some in uniforms and others wearing colorful hats and costumes. Our long-suffering driver, who has now had several weeks to get used to us, was already pulling over and turning around as we shrieked our need to see more.

I had to pull on shoes, so Janine and Jaya had moved toward the crowd by the time I followed. Only…something was happening. The neat lines of children were now a surging mass. They swept me up and pushed me toward the front, where school staff were already warmly welcoming Janine and Jaya, and exclaiming over my arrival. Foreigners! Right here at our school, Smt Shobhatai Kore Warna Mahila Mahavidyalaya, in Yelur!

In about a nanosecond, a young girl appeared with a napkin covered tray bearing three roses, which were ceremonially presented.

A row of chairs lined up with military precision for the three of us and a gentleman we assumed to be the Head.

Children were almost fainting with excitement as their carefully learned discipline broke and they waved cameras begging for “Selfie, Madam?”

Teachers blew whistles, hustled the children back into line, and thanked us over and over for coming. 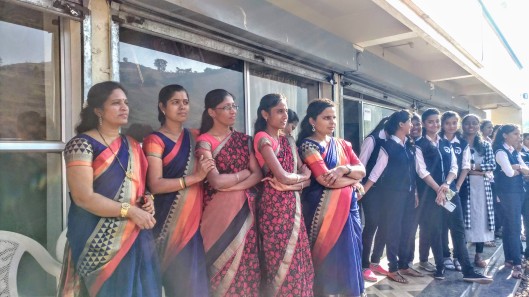 We were treated to an absolutely wonderful show of children dancing, playing instruments, and marching.

They were accompanied by enthusiastic musicians and drummers.

Every time we suggested that it had been lovely but we really didn’t mean to interrupt their celebration, they looked at us like we were speaking Martian, as they gave us to understand that our unplanned visit was the most exciting thing that had ever occurred at Smt Shobhatai Kore Warna Mahila Mahavidyalaya, or in all of Yelur. Maybe in the state.

We posed for selfies with almost every child in the school,

And following a quickly organized school photo with us in the center,

We finally left, with the entire school gathered to wave us off.

I’ll bet even Kate and Will have never seen anything like it. I know we’ll never forget the morning a school of beautiful young women and their understanding teachers turned three chubby senior citizens into celebrities.

“In the future, everyone will be world-famous for 15 minutes.” —Andy Warhol

For more about our travel adventures in rural India, please check out our books here.

[click on image for reviews, preview, and FREE book from Amazon.]