Have you ever noticed how you can go all your life without hearing about something, and then all of a sudden you’re surrounded by it? Admit it—depending on your age, at some point in your life that’s led you to commit platform shoes/ shoulder pads/ MyLittlePony/ iWatch/ or one of these. (Yes, I mean you: the one with the OccupyWallStreet Beanie Baby. And don’t tell us about how collectible it is…)

Well, on my last international flight, one of the “classic” movies offered was the Fred Astaire/Leslie Caron version of Daddy Long Legs. I passed.

Finally, last week I was looking up an audiobook reviewed on Cathy Ryan’s Between The Lines book blog which was performed by Julia Whelan, who could probably make reading the New York phone directory entertaining. And there I saw it…Julia Whelan’s audiobook performance of Jean Webster’s 1912 epistolary novel, Daddy Long Legs. And right next to it, popped up a message that somehow I had an extra download available. Clearly, the universe was sending a message.

And that message was? Download this charming, hilarious, brilliantly performed version of a classic book. Listen to it while you take long walks along the river or through the park with your dog. Grow up and fall in love along with the young girl as her letters reveal her passage to a witty, intelligent, curious, and surprisingly modern young woman.

Daddy Long Legs tells the story of Jerusha Abbott, who has spent the first seventeen years of her life in an orphanage. When a mysterious benefactor agrees to send her to college on two conditions—that he remains anonymous, and that she sends him a monthly letter which he will never answer—she dubs him Daddy Long Legs (after his elongated shadow, the only part of him she’s ever seen). Arriving at the Vassar-modeled “girls college”, she renames herself Judy and begins her one-way correspondence.

This is a 5-star performance of a 5-star read. Despite a setting that’s over a century old, Julia Whelan brings a fresh, timelessly amusing life to the story that actually had me blinking in surprise at period references such as Judy’s wish that women could vote. My only regret as a listener is missing the author’s hilarious line drawings that accompanied the original text (but you can find them here). Plus, you can download the public domain book for FREE here, (although still without the illustrations.)

Jean Webster didn’t invent the epistolary novel, of course. One of the earliest versions I know of is the Love Letters of Abelard and Heloise, from early twelfth century. I was delighted to see these on the reading list of my first college lit course, until I realized that this Romeo was not only two decades older than his Juliet, but a monk who was supposed to be her tutor. And that was before her uncle got annoyed about their relationship—which had already resulted in the production of son Astrolabe (named for a scientific instrument)—and arranged for Abelard to be castrated. He went back to fulltime monking, she headed up a convent, and we aren’t told what became of their scientifically-monikered son. As you can imagine, that put a pretty severe damper on their love life, and on their subsequent letters. To the best of my knowledge, even Julia Whelan would find it a challenge to make their narration a fun listen. 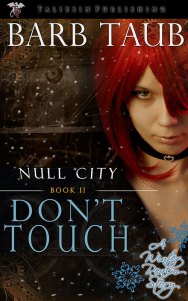 Hope flares each morning in the tiny flash of a second before Lette touches that first thing. And destroys it. Now only $.99/£.99! [click on image for preview, reviews, buy links]

Luckily, this gloomy beginning didn’t discourage other epistolary literary efforts. Anne Frank’s Diary of a Young Girl, C.S. Lewis’ The Screwtape Letters, and Alice Walker’s The Color Purple are just a few. And, if I can put myself into such august company, my own book Don’t Touch is made up of blog entries, emails, and texts. (It’s on sale now for only $.99/£.99 at Amazon.) Here’s an epistolary excerpt: