A while ago several of my friends were discussing the number of wedding presents to be purchased this time of year. Somehow (there may have been margaritas involved) the topic turned to things somebody should have mentioned before the I-do’s. 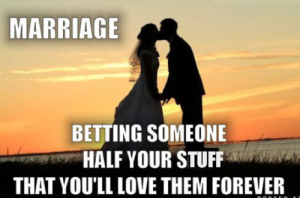 Since I first posted this piece several years ago, it has continued to get more search requests and hits than anything else I’ve written. I find this sad… [image credit: weknowmemes.com]

My fellow women, many brave margaritas were sacrificed to bring you the cautionary warnings in the following list. If you get married, chances are good your spouse will be a male______ [fill in blank from list below. Bonus points if you get all ten.]**

10. DRIVER: Unless you live in Manhattan or have accumulated buckets of disposable income the old-fashioned way—lottery, inheritance, sneaking onto a city bus that’s had an accident so you can claim a back injury—sooner or later you and your husband will find yourselves in the same vehicle without benefit of professional chauffeur. My theory is that there is a boys-only supplemental drivers-ed class that the girls never see. There (in addition to the cabal handsignal involving middle fingers) boys learn the sacred tenets of manly driving:

9. HOARDER: Your husband will know that if anything happens to his good old college sweatshirt covered in his good old college stains, he will never be able to exercise again. Also, the second you throw away that take-out container with the cure for cancer he’s been culturing in the back of the fridge, it will trigger the immediate meltdown of polar icecaps. As you sit on your roof, waters rising around you, he’ll be forced to point out that it’s all your fault. If only you hadn’t tossed that leftover Kung Pao Chicken, you could have held out until help arrives. And if only you hadn’t gotten rid of that special sweatshirt he needed for his workout routine, he would be in good enough physical shape to turn the rowing machine and one of the bathtubs into a rescue boat. If only.

8. LAUNDRY: Bad case scenario – he might expect you to do his laundry. Worst case scenario: he will do your laundry.

7. FEMALE SYMPATHIZER WANNABE: Take your average millennial husband. He knows that PMS is out there, his enemy, waiting to turn a relatively rational wife into someone whose reply to “Hello,” is “What do you mean by that, you Neanderthal?” He also knows that even to suggest, “That time of the month?” and he could be on sofa-sentry until sometime next century. If he’s lucky. Will this stop him from asking, “Touch of the old hormones?” Of course it won’t. (But it might help your defense when you’re trying to get the homicide charges reduced to involuntary manslaughter…)

I wouldn’t mention it to your husband, but this is not what your children will actually do. [image credit: afrobunnyqueen]

6. BODILY FLUID REJECTOR. (No, I didn’t mean those bodily fluids. Get your mind out of the gutter, girl…) Men, for the most part, cannot clean up vomit. That’s why they go far, far away for spring break and boys’ weekends. What’s upchucked in Vegas gets cleaned up in Vegas – by someone else. So be prepared, girl: if you get married, your child will not cough, blow, wipe, or barf on anyone but you.

5. GUILT: Your mother-in-law might be the Travel Agent of the Year on the Guilt Trip Grandparent Express. But read the fine print before you start shopping for the Blue Almonds Moses Basket that Will and Kate picked out. It starts with the episiotomy, and next thing you know your single-digit clothing size, ability to stand without swaying an invisible child on your hip, or speak in full sentences is gone. Suddenly your kids get all the good lines, while you open your mouth and out comes your mother. It really puts owning a cat into perspective.

4. PHOTOGRAPHER: Husbands have strange ideas about what makes the perfect photo. He will look through a camera’s viewfinder and take the shot even if it does not contain a single child or close relative. If forced to photograph members of your immediate family, he will spend so long waiting for all eyes to open and all fingers to be removed from bodily orifices that the children will have grown two sizes and wandered into another zip code before the shutter clicks. Thanks to the freedom of digital cameras with exceptionally large SD cards, women know you can click the shutter nonstop on the off-chance that a child you are related to will wander past the viewfinder. A little photoshop magic and voila! Perfect shot every time.

3. PERSONAL HYGIENE INNOVATOR: How do men know these things? Is it possible that some mother gathers her little males and tells them, “Boys, your wife will need reminders that there is a man around the house, so be sure to leave the seat up, the manly underwear on the heater, and your very personal athletic gear looped over the towel rack. Oh, and come out and talk to her while you’re flossing your teeth. Wives love that.” 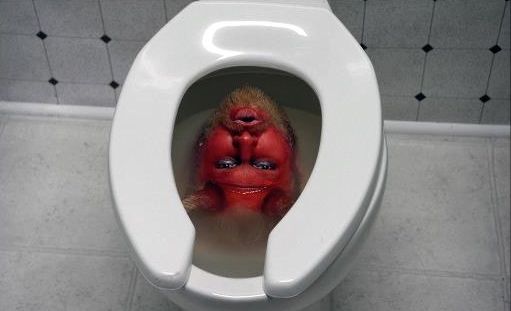 Leave the seat up, go to hell. (If women ran hell.) [Image Credit: Your Pretty Face is Going To Hell]

2. HELPER: Many husbands see marriage as a partnership. They’re willing to do their fair share – as long as it’s not anything that has to be done at a defined time, or where their hands get wet. Or if it involves bodily fluids of course. (see #6 above) For example, he will clean the kitchen, clear the table, load the dishwasher, rearrange the dirty dishes on the counter. When it comes to cooking, he’ll willingly peel vegetables, cut up dead chickens, chop the onions, and pierce the film. Luckily, he knows the Kitchen Fairy will handle the rest. You didn’t know about the Kitchen Fairy? Her little sister, the Bathroom Fairy, is the one who replaces toilet paper on the spindle. She also knows the magic spell to make the vacuum turn on.

The top reason not to get married?

(**The funny thing about this list? It contains all but one of the ten top reasons FOR men to get married.)

Editorial Note: Of course, marriage is a crap-shoot where the odds are all against you. But I took that bet over thirty years ago, and I’ve been winning ever since. You can too. (Except for the part where he helps with your laundry. Don’t go there.)

44 thoughts on “Still? Top Ten Reasons Not to Get Married (for women) #SundayBlogShare”