I’ve been thinking about my mother lately for three reasons. 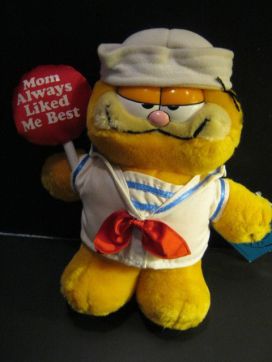 (How about we keep this our little secret? My nine brothers and sisters never need to know…)
Happy Birthday Mom! [image credit: ebay]

Reason #2: She was the subject of the very first newspaper article (below) that I sold back in 1991, and which the Roanoke Times ran proudly under the byline “BARB TOAD”.

Last Wednesday I went to Southern California. I had been planning this visit for minutes ever since I had to hang up during our last phone call. I didn’t pay any attention at the time because since becoming a parent, many of my phone calls tend to end abruptly when a caller notices that her two-year-old is attempting to fly or her three-year-old is starting a nudist colony on the front lawn.

In fact, my mother had decided it would be more convenient to go down to the hospital to have her heart attack and subsequent bypass surgery. My parents did not want any of us kids to worry, so they told us that she was only staying in the hospital in case her doctor wanted to do some tests on her gallbladder. I’m sure lots of you have said to yourselves, “I’m looking for something to do this afternoon. I think I’ll drop by the hospital and see if anyone wants to do a few tests on my gallbladder.”

Even when we found out that the doctor was a cardiologist, I didn’t worry too much. I figured that the hospital was too small to have a gallbladderiologist on staff. But when the florist told me that the ‘CICU’ in her room number meant she was in Cardiac Intensive Care Unit, I figured I’d better head out there and make sure someone explained to the doctor the difference between hearts and gallbladders.

I meant this as a joke, but unfortunately the doctor was a surgeon (which comes from the Latin meaning ‘humor-impaired but godlike in all other ways’). He just kept pointing to the pictures of Mother’s completely blocked arteries and assuring us that because we had not completed medical school and surgical residency we couldn’t appreciate the finer medical points like the advantages in having blood flowing through the heart.

When one of us started asking technical questions, he asked if she was a nurse. “No, I’m a gynecologist,” she replied. The doctor said, “Oh a gyneCOLogist” with all the respect usually reserved for door-to-door roofing salesmen. “I can’t wait until your wife has a baby, buddy,” she muttered back.

Finally I went into my mother’s room. Clearly overwhelmed with joy that I had made the 2,500 mile journey to be at her side, she looked at me and said, “Is that your backpack on the floor? You just come in and drop your stuff anywhere?”

In order to allow the patients to get plenty of rest, the CICU has a rule that only immediate family members are allowed to visit. One overworked nurse complained to me that she had fourteen calls on her shift alone from people claiming to be my mother’s children. I assured her that there were only ten of us and those other four were impostors, but she didn’t seem delighted with that news.

As soon as she found out nobody was going to test her gallbladder, my mother was ready to go home. We were worried about this because of all the stairs in her house. At last (over the objections of the urban planner sister who kept bringing up nitpicking details like permits), my sister and brother came up with a plan to remodel the garage into a room with a bath.

Mother heard us out and then rang the buzzer. When the nurses came running in, she introduced us: “These are my children. They want me to live in the garage.”

With much further muttering about the only reason we weren’t just putting her out there on an ice floe like Eskimos’ old people was that it was Southern California and it would melt too fast,  Mother finally came home from the hospital. That same day I flew back to Illinois. My husband and children seemed reasonably pleased to see me, although the six-year-old did want to know if they could still have dinners that consisted solely of icecream. But when I looked over the cleaning, shopping, and cooking which awaited me, I wondered if I could find anybody willing to do a few tests on my gallbladder.

Oh, and the third reason I’ve been thinking about this?

Reason #3: Yesterday I was feeling like Loki after the Hulk-smash, so I popped in to our local hospital. When they said they were going to test my gallbladder, I notified my family. We all knew what this meant—heart surgery, interactions with surgeons, and my possible move to the garage.

In this metaphor, the green guy is my gallbladder, and Loki is the rest of me.

But sometimes a gallbladder really is just a gallbladder. After spending the night with enough electrodes and monitors hooked to me to power a small city, I’m back home today with a depressing new diet and much gratitude to lovely Nurse Fiona for her impromptu soft-shoe, plus the rest of the wonderful staff of the Arran War Memorial Hospital in Lamlash. 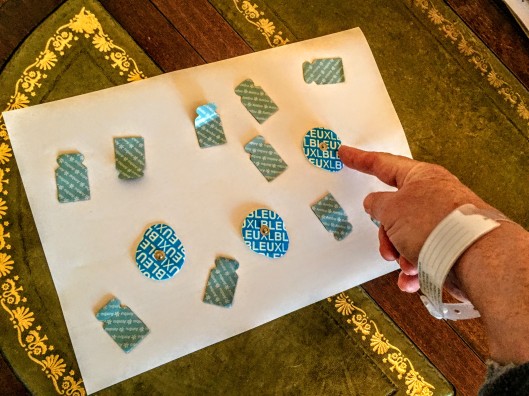 No seriously. Before I could take a shower, I had to disconnect and peel off all these electrode tabs from every part of my body.