When you’re a grownup.

There are things I know I’m supposed to do. (Floss daily. Save for retirement. Go to the gym. Call my sister. Write reviews for books I’ve read. No, really…call several sisters.) Thing is, there are just so many other essential, time-critical things that get in the way. (Binge watch Good Omens. Order the latest Coolhaus flavor. Wait for Thursday when the chippy van parks up at our end of the village. Cyber-stalk the kids…) 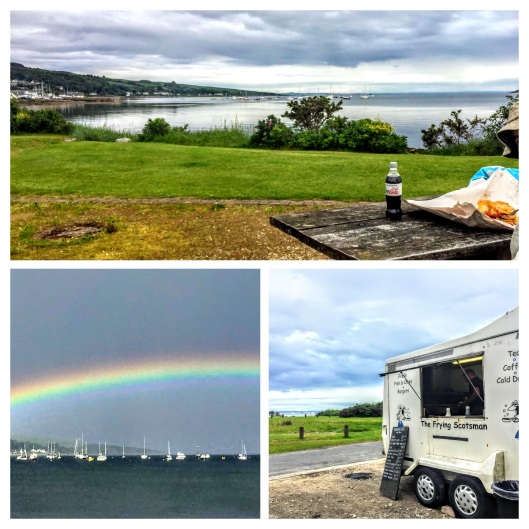 The Frying Scotsman. Seriously great fish and chips with best view ever.

But sooner or later, the moment arrives. Heaven and Hell are dining together at the Ritz, fish & chips and ice cream are consumed, and the kids have blocked me on social media. Time for another lightning round of book reviews. Please join me over the next few posts for short reviews of books I’ve read but not managed to review over the summer. (It really is very good fish and chips…)

She’s back!
Five feet one and full of fizz, Jennifer Brown has learned to roll with the punches and adapt to whatever life throws at her. It’s thrown plenty in the past and she’s had to use her steely core to reinvent herself, first as cook and housekeeper to a saucy sexagenarian, then as manager of a tumbledown country estate with sensitive secrets. In Jennifer Brown On The Move, this Bridget Jones with knobs on is taking charge of her life again, showing the world she can move in the most exalted, high-power circles and lose not an ounce of her gutsy, down-to-earth charm. Her hilarious cross-dressing confidant Will is on hand once again, with pearls of caustic widsom, and her old boss Jonathan Dashwood-Silk breezes in and out of her life, still dripping charisma but still needing our heroine to dig him out of the odd hole. As she crosses continents and breaks bread with the world’s movers and shakers, Jennifer Brown finds her mind still troubled by thoughts of the quiet man with the warm eyes and the velvet vowels. Then that daydream is torpedoed when she’s invited to his wedding.
But you know Jennifer. She never gives up!

Remember when we loved Bridget Jones? Wasn’t her obsession with her weight, search for a man, and drinking really funny? If you miss her, you’re going to love Jennifer Brown. You know this because everyone in the book tells you that you’ll love her, from her (obligatory gay) BFF to the rich, dashing, er… Jonathan Dashwood-Silk.

‘Because being you—being Jennifer Brown—is…’ her eyes were glistening now. ‘…is the best thing to be. The best thing anyone could be.’

I haven’t read the first volume in this series, but I’m told that we meet Jennifer as an inept admin who can’t spell or type. In almost no time and despite a total lack of experience, she has gone from being a typist who couldn’t spell to managing a country estate and returning it to profitability. From there, she enters the rarified ranks of high-end wine merchants, with an international portfolio of rich, famous clients. Oh, and despite a lifetime of drinking the cheapest plonk possible, she has developed “…a very discerning and educated palate.”

Who is Jennifer? Yes, she’s the Mary Sue—that character so totally, incredibly perfect that instead of being the focus of the plot, she bends the laws of physics to make the rest of the universe revolve around her. If spoilers didn’t prevent it, I would tell you about an ending so fantastical, even the most sentimental of victorian children’s stories wouldn’t dare attempt it without a godmother on some serious fairy steroids.

And yet…I like Jennifer. She’s just so sweet and warm and funny that I can’t help liking her—even though I have the distinct feeling that if you pitched her against a wall, she would just stick there a bit, perhaps oozing down slowly until an incredibly handsome and rich person happened by, fell in love at first sight, and whisked her off to their beach mansion in fairyland or Malibu to recover. Even then.

Jennifer is a giant step backward for feminism (as, we must admit, was Bridget Jones). Hardly the “everywoman” claimed on the cover, Jennifer Brown is instead polar opposite to current young women characters such as Phoebe Waller-Bridge’s semi-autobiographical Fleabag.

And that’s okay. If you’re in the mood for a fairy tale, if you have a superhuman capacity for the suspension of disbelief, if you just want a bit more Bridget Jones—then Jennifer Brown is perfect for you. You won’t have a moment’s worry, you know all will be spectacularly OTT-well, and you’ll feel like that happily-ever-after is well and truly job done.