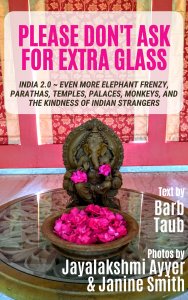 [In these days of lockdowns, quarantine, and sheltering in place, we can at least travel virtually. Please join Janine, Jaya, and me as we drive across India. I’m posting excerpts from our upcoming humorous travel memoir Please Don’t Ask For Extra Glass.]

When it comes to our annual India trips, Janine and I have worked out a foolproof travel strategy we like to call ‘Whatever Jaya Says’. In this case, Jaya decided we should make our longest drive north to Rajasthan on this, the first day of our trip and then loop back in smaller stages. It was a terrific strategy, right up until we hit our first Diversion.

There was no warning, just a tiny yellow “Diversion” sign as the beautiful freeway became a rutted dirt path. Our driver Dashrath frowned, but plowed forward. Eventually, and with similar lack of ceremony, the paved road was back, and we relaxed. For a mile or so, until the next Diversion. And the next one. And the next. Dashrath was NOT pleased.

From the back seat, Janine and I watched as Gujarat’s cities full of professionals, modern cars, and office buildings slowly changed until we were sharing the roads with camels, passing fields growing potatoes, peanuts, cumin and mustard. Even the local art changed, as small town roundabouts circled statues celebrating local industry and interest, from a giant’s hands holding a frighteningly large potato, to cattle sculpture, to even more cattle sculpture. 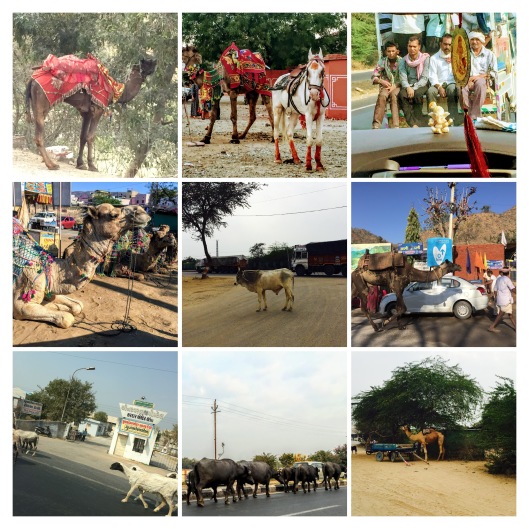 While you see cows and other animals in the roads everywhere in India, they had company here—goats, camels, peacocks, more cattle, bigger cattle with lumps on their backs, water buffalo, and of course, millions of dogs.

Trucks passed us, swaying with overload cargoes of everything from grasses to snack packages to gigantic bags stacked to impossible heights, often with passengers clinging casually to the sides and tops. Dashrath mentioned the bags contained pressed cow dung, but assured us that they “hardly ever” came loose and crashed into the cars behind them. Janine and I mouthed in unison, “Hardly ever?” 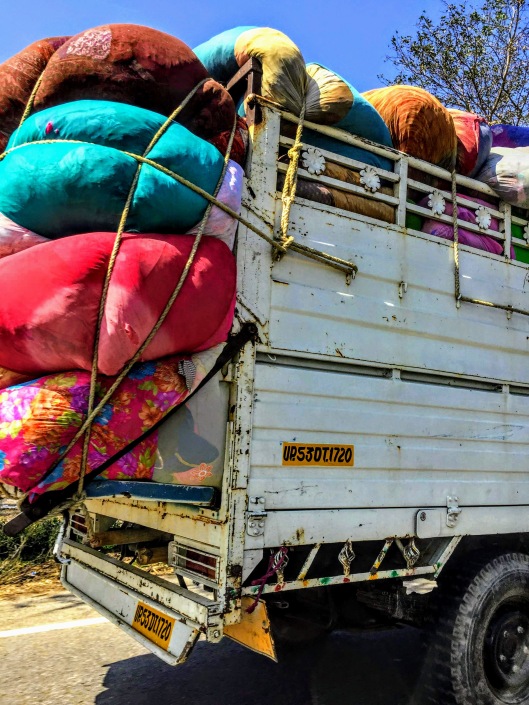 [Unless otherwise indicated, all images in this post are ©Janine Smith and Jayalakshmi Ayyer. All rights reserved.] 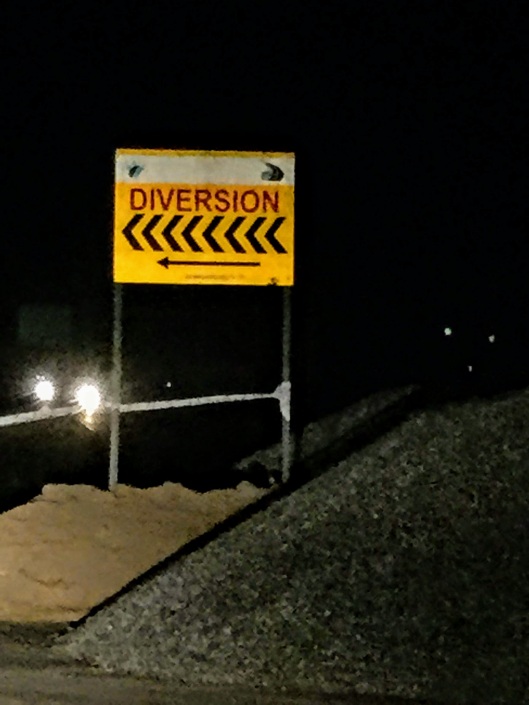 The diversions rolled day into night and our expected eight-hour trip almost tripled. Dashrath probably thought we were nuts when we made him stop to take a picture of the millionth diversion. But by then even he was yelling “Diversion!” with us each time we saw another little yellow sign. 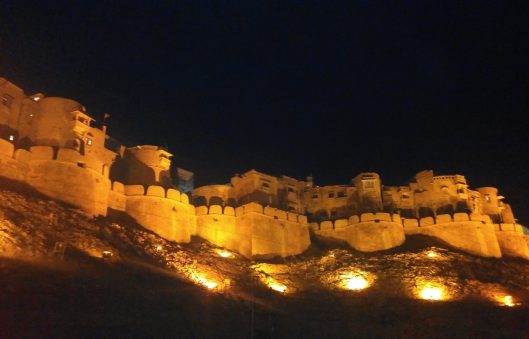 Finally, we reached the series of roundabouts marking the approach to Jaisalmer Fort, its twelfth-century walls glowing amber against the horizon.

But Jaya navigated us away from the welcoming lights and down long dark roads leading into the desert. About the time Dashrath must have been wondering if our plan was to lure him as far as possible away from civilization, leaving his body to be eaten by camels, we came on a dirt road with a tiny sign promising to lead us to Club Mahindra Jaisalmer. The road turned to a rutted dirt path but a clearly relieved Dashrath grinned and yelled, “Diversion!” 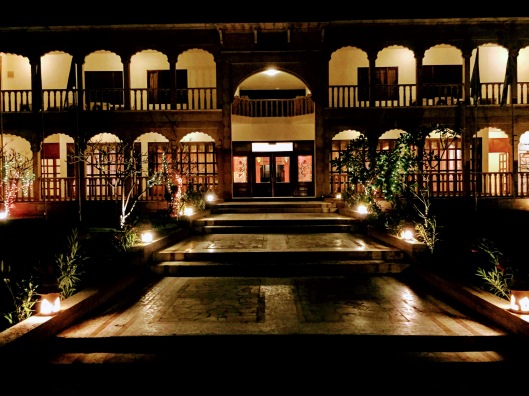 We came around a bend and the desert disappeared in a splash of noise and light and beautiful long buildings rising against the dark.

It was a fairyland of exotic beauty and magic until we stepped out of the car into a sound I’d not heard for over a year—since I was last in India in fact. Windows that should have beckoned instead throbbed with a laser strobe light, while a voice that could only be described as Justin Bieber with a grudge match and a large stock of helium assaulted us. My worst fears were realized: we were in the FunZone.

On our first India trip the year before,  friend and travel-guru Jaya introduced us to Club Mahindra, a chain of five-star resorts catering to Indian families instead of foreign tourists. Their properties are each beautifully developed and tailored to their locations. But whether in individual bungalows surrounded by water and lovely little bridges, or a mountain village, or an old palace, there are two things each Club Mahindra resort has in common:

My working theory is that some Mahindra executive’s kid accidentally got an MBA, and came back with all kinds of ideas on how to attract hip young affluent resort guests. Instead of looking at their guest demographics (or maybe just in hopes of sidelining MBA-Jr’s damage potential), the FunZone concept was born. Why did I care? Because the one place in each resort that offers space, wifi, isolation, wifi, lots of power outlets, AND WIFI is… the FunZone.

**[Have I mentioned that I really, REALLY like wifi?]

Since most Mahindra resort guests are middle-aged patrons who only enter the FunZone to check Facebook, I usually had the FunZone’s wifi all to myself. Until, that is, it was time for The Program. In fact, the only people remotely inhabiting the age zone targeted by The Program tape (slightly out of date American pop songs played at decibel levels guaranteed to strip hearing from a teenage audience) are the mercilessly cheerful Fun Zone Program tape purveyors themselves.

The first night this happened, we retreated in shock to our room and our earplugs. In our next resort stop, I called the front desk and asked if they could stop The Program, as I could see that the room was empty except for the karaoke attendants. No dice.

Then came the third resort. When the unmistakable sounds of The Program accompanied by laser strobe lighting signaled the exodus of every FunZone patron, I had enough. I went up to the teenaged tape-wielders and asked them to turn it off.

The two young men (who had costumed for The Program by replacing their military-ish uniforms with t-shirts, sunglasses, and baseball caps turned backwards) told me that wouldn’t be fair to all the other people who would be expecting The Program. 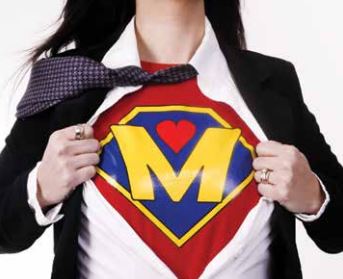 This is a job for SuperMom [Image credit: New Orleans Living]

This wasn’t a job for Mrs. Nice-Tourist. I needed to find a (virtual) phone booth and change into my alter ego, SuperMom—able to leap specious arguments in a single bound, scare football hooligans into sitting quietly and using their indoor voices, and fight for truth, justice, and wifi.

Barb/S-Mom: “Look around this room.”

Barb/S-Mom: “Do you see anybody enjoying The Program?”

Barb/S-Mom: “Do you see anybody at all besides us?”

Barb/S-Mom: “Then Turn. It. Off. Please. You are perfectly welcome to turn it back on the second a Justin Bieber fan comes in begging for a fix.”

The next day when Jaya and I went in to use the wifi, the attendants turned pale and pointed at me. [Oh, no—who let that Mom in here again?] They leaped to turn off the music and turn on the lights, whispering warnings that Madam was back.

FunZone victory was mine, and it was soooo sweet. But alas—it was also fleeting.

Now a year later, with the disco lights pulsing and The Program music blaring, we knew only an unending series of epic battles would win this war. What would SuperMom do?

Apparently, she would pull up her lycra Mom-jeans, straighten her cape, and go to the Reception desk to beg for a room as far from The FunZone as possible.

2 thoughts on “Diversion. #Travel in India BC (Before Coronavirus) #humor #India”