My daughter eating Berthillon [note: in honor of July 19th, International Ice Cream Day (is SO a thing!), here is a little blast from the past for Paris and Notre-Dame-that-was and good friends and of course, Ice Cream…]

I found it. The best thing in Paris. This time, anyway…

A friend asked me what I liked best about Paris this time around.

Paris. So I’ve done this… 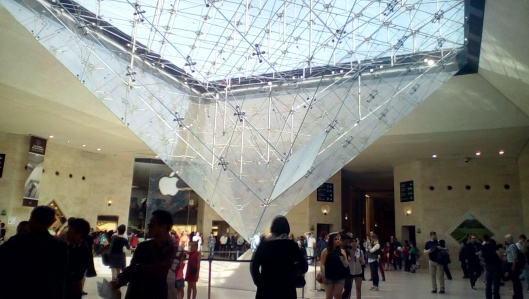 I even know there’s an Apple store in the lobby of the Louvre.

But were any of them the best thing about Paris? I started with my neighborhood. We were staying in a flat in the 10th arrondissement. This isn’t a place that gets described as posh or trendy. Actually, if you google 10th arrondissement, the first word it offers is “safety”. And in fact, it’s a multi-ethnic study in surprises. Down one passage (lane) off of our street, Rue de Faubourg Saint Denis, stylish restaurants and bars are packed until…well, actually, some nights it didn’t quiet down until just before dawn.

Another passage held stores and restaurants that looked like they’d just been airlifted in from Delhi. One block over, the Metro stop, Chateau d’Eau, anchored what one local resident called the African beauty industry. The block leading to the Metro usually had wads of hair blowing around like tiny tumbleweeds. Windows of shops were lined with wig stands showing glamorous hairstyles. When I peeked inside, the salons were packed with women getting beautiful braids, or stunning weaves. At the Metro itself, young immigrants ringed the entrance, and literally pounced on any Black woman who emerged. “Ma chérie” we would hear, along with offers of le tissage (weave). Politely, they ignored me and my sensible old-lady bob.

If you went up the street toward the train station, Gare du Nord—and if you remembered to look up— you might see the incredible building-sized sculpture of St. Vincent de Paul. Placed in 1987 by the artist Jean-Pierre Yvaral, it uses slightly twisted blades of metal to create the shading.

Just past the train station is the Canal Saint Martin, with beautiful little cross bridges, restaurants, and shops. 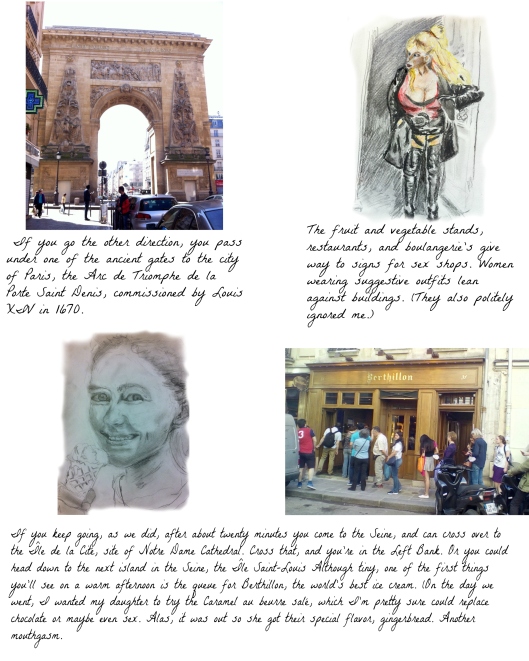 [I still have a few drawings left from the Paris days when I was without wifi, so I hope you’ll bear with me as I use those up.]

Margarita joins us for dinner. How civilized.

Oh, yes. And the best thing in Paris? Well this trip, anyway, it was the restaurant a few steps from our door. When we came to claim our reservation, the owner showed us to a miniscule table that would have been a challenge for one person, let alone three. We pointed to the booth by the front window and asked if it was available. “Do you like cats?” he asked. Hoping he wasn’t talking about a menu item, we agreed that we did. He scooped up the fat, sleepy cat who apparently was queen of the booth and motioned for us to be seated. When done, he informed us that her name was Margarita, and that this was, technically, her booth. I scooted over a bit, Margarita curled back up asleep against me, and purred through the whole meal.

The best thing in Paris.

29 thoughts on “The best thing in Paris. (It may surprise you.) #humor #travel #IceCream”