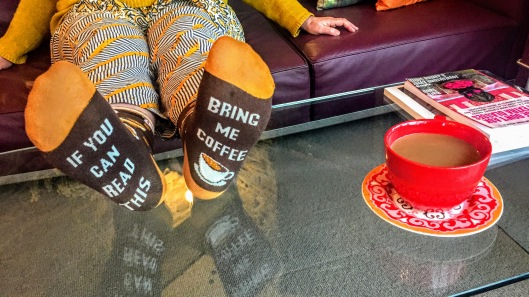 “If you can read this, send coffee.” —Notes from a pandemic lockdown.

It’s been a strange week here in Italy.

First we had Easter, then Christmas. Okay, I know what you’re thinking—we were supposed to have Easter. But no way was I ready for the way they Easter in Florence, let alone the way they do it during a pandemic. Of course, between vaccine shortages and super-contagious covid variants, Italy has moved restrictions back to Red level, as it was in 2020. You can only leave the house to obtain essential survival-critical supplies of food, medicine, and children’s clothing. (My kids used to wake up a completely different clothing size on a regular basis, so that last one makes perfect sense to me.)

Last year Easter was cancelled, including Florence’s signature variation, the Scoppio del Carro, or explosion of the cart. This is a tradition tracing back to 1097, when Pazzino de’ Pazzi brought three flints back from the Church of the Holy Sepulchre in Jerusalem. Each year, the sacred flames were lit from those flints, marking the celebration of Easter. By the 15th century, the current celebration had evolved. 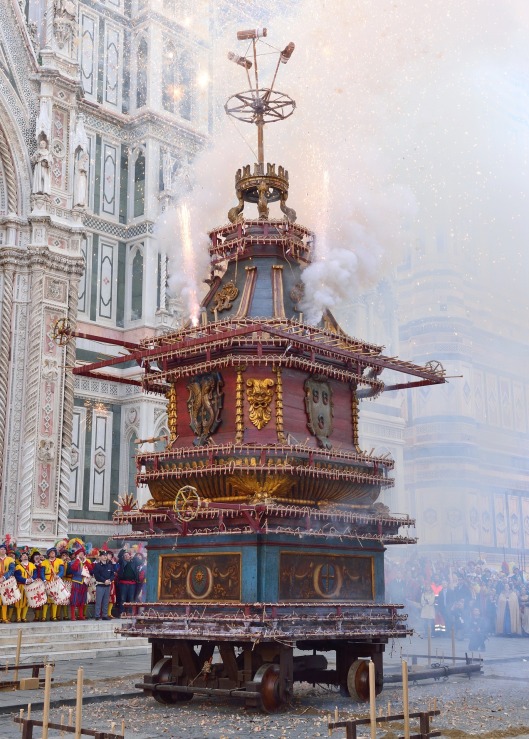 The Brindellone, a 30-foot tall cart packed with fireworks, is pulled by garlanded white oxen through the streets of Florence, accompanied by crowds in 15th century dress. [Image credit: Pixabay]

The cart is positioned between the Duomo (Cathedral of Santa Maria del Fiore), a UNESCO World Heritage site packed with priceless treasures, and the Baptistery with its famous Gates of Paradise bronze doors. Then, and I couldn’t make this up, the sacred flames are lit inside the cathedral where an artificial columbina (dove) packed with rockets is fastened to a wire leading to the Brindellone. The fuse to the dove is lit, and she shoots across the cathedral in a shower of sparks, flies to the Brindellone and ignites its fireworks, and then shoots back into the cathedral. If all goes well and the dove makes it all the way back before her sparks run out, the next year will be a good and prosperous one.

Meanwhile, the cart outside the cathedral erupts in lavishly choreographed fountains of sparks in front of the two iconic buildings. (Luckily, some of the more valuable pieces such as the original bronze doors, statues and works by Michelangelo, Donatello, and other lesser Renaissance masters who didn’t get Ninja Turtles named after them, have been removed to the safety of the Museo dell’Opera del Duomo, which is located just… um… next to the Cathedral and facing the Brindellone.) 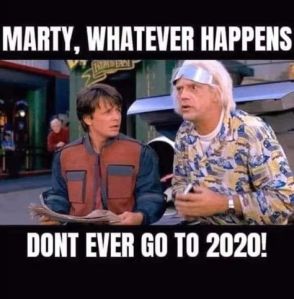 But the dove must fly because the hopes of a city are riding on her. Just consider what happened the years she didn’t complete her flight. In 1966, all Florence was flooded by the Arno river. In 1984 after an interrupted flight, a frost destroyed the olive trees around Florence, while 1988 was one of the worst winters on record. And then came last year…2020, when the celebration was cancelled. We all know what happened then.

So on Easter Sunday morning, we watched online as the dove began her flight. At the same time, we looked from our terrace above the city of Florence, as the cart began its pyrotechnics and the dome was briefly hidden behind a cloud of smoke. 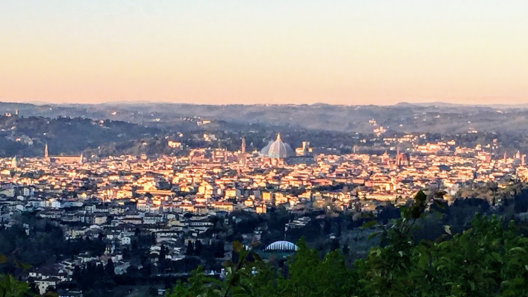 View from our terrace, smoke rising from the Duomo.

The good news is this year’s columbina successfully completed her flight without sending a significant chunk of the world’s art heritage up in a flames. In a decisive middle finger salute to 2020, next year can only be better.

If people shopped for families like American fast food, I’d say my parents ordered the super-sized value meal. “Yes, we only wanted the first two kids, but with ten you get college scholarships? That does come with fries, right?” So at Christmas, instead of buying presents for our hundred or so immediate family members, we each draw one name. 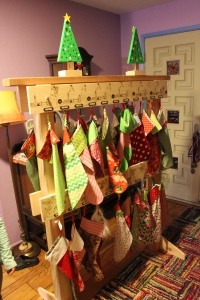 We can’t hang stockings with care, or they would blanket the room and Santa would never be able to fight his way free. So my brother made this stand for all participants. Santa isn’t complaining.

It’s a great system, unless you’re in the middle of a worldwide pandemic. In our case, that meant The Hub and I were stuck in Italy with no chance at parole. Unfortunately for him, my older brother drew our name. Even more unfortunately, he decided if we couldn’t come to America for Christmas,he would send an American Christmas to us.

He laid it out like a military campaign. Essential supplies—rum balls, Grandmother’s coffee cake, a variety of Christmas cookies, and other necessities— would have to be baked, vacuum packed, frozen, and surrounded by ice packs. Critical ingredients—Girl Scout cookies, silly socks, whole bean coffee—would have to be assembled. He practiced on my lucky nieces until he had the shipping technology down. Then, at astronomic expense and even more astronomic reliance on the mail services of several countries, he mailed it.

For the next four months, his exquisitely wrapped packages went on their own version of the Grand Tour. We have a five page document detailing, in very small print, the various places visited by our Christmas present, including no fewer than twelve entries in other cities where it was “not delivered due to non-payment of fees by the recipient,”—understandable, since the recipient wasn’t anywhere near those places, most of which (thanks to her American geography training) she could pinpoint precisely as being somewhere in this galaxy. Probably.

In a way, of course, I’m a little bit glad that the Italian couriers and postal gods don’t actually deliver to us. You see, our letterbox has yearly subletters. (Sorry, just couldn’t resist that pun. I should be severely punished.) A small yellow bird we’ve named Fred sheltered there though the autumn. Then this spring, our letterbox began to fill with bits of twigs and down.

Our neighbors told us our box has been used for some time now as a regular nesting site, and sent us a picture of last year’s occupants. 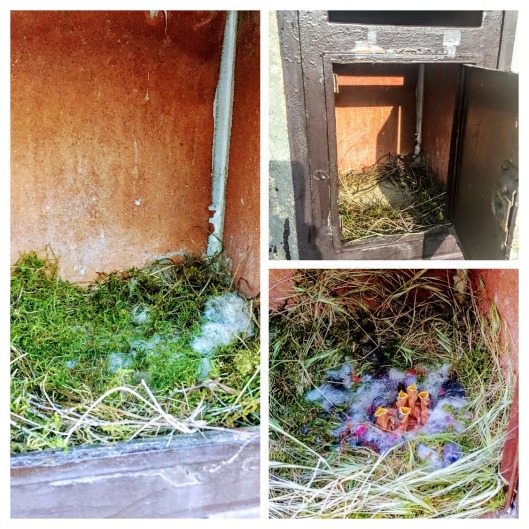 This year’s new nest in progress (plus shot of last year’s occupants).

So I was actually relieved when the Hub intercepted delivery of our Christmas box this week. With my family on video, we opened package after package designed to create an American Christmas in Florence. In April. 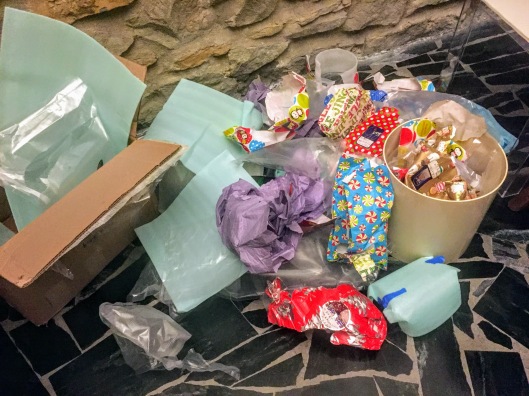 49 thoughts on “If you can read this; bring coffee. Oh, and Merry Christmas. #humor #Italy #pandemic”