Friends help if that creep in the bar hits on you. Best friends help you hide the body. Family does all that, but you better believe they’ll bring it up at every family event and national holiday. And the friends that become your family? They won’t say a word. They won’t need to.

Family isn’t always blood, it’s the people in your life who want you in theirs: the ones who accept you for who you are, the ones who would do anything to see you smile and who love you no matter what.” —Maya Angelou. 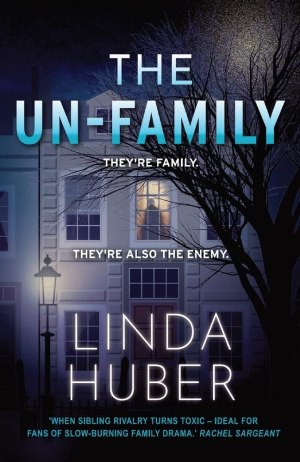 For Better, For Worse

Wildlife vet Holly’s life seems blissful: husband Dylan is the man of her dreams, she has a rewarding career and a lovely home. And yet, a tiny niggle is growing daily. Dylan is becoming increasingly remote – but why? Holly is determined to mend the fissure in their relationship. But a shocking discovery changes everything…

Then there’s Dylan’s family: his wayward twin Seth and their widowed mother Elaine, who is rather fond of a glass or two of sherry. Nothing in Elaine’s life is easy, bringing up teenage granddaughter Megan while the family grieves the loss of Megan’s mother.

A tragic event rocks the foundations of the family, and Holly’s life starts to unravel. Dylan drifts ever further away. Megan is left uncertain and alone, while Seth falls deeper into himself.

The bonds that once bound the family together are breaking. Can they ever be repaired?

My Review: 4 stars out of 5 for The Un-Family by Linda Huber

Author Linda Huber usually has two questions that define her psychological thrillers: what makes a family, and how far can you push those bonds before they break. In her newest release, The Un-Family, she turns those questions inside out. This is a family whose bonds were weakened and cracking long ago, and we’re just witnessing their final shattering.

Holly is a young veterinarian who loves her job as a wildlife vet, her husband, and their plans to start a family. But she realizes that something isn’t right, as her husband Dylan becomes more emotionally distant by the day.

Meanwhile, Dylan’s teenage niece Megan, an orphan living with his mother Elaine, is also frightened by the changes only she seems to observe in her grandmother.

Please, Grandma, be okay. Because it wasn’t just this morning, was it? Grandma’d been – different – a couple of times lately. She’d put her specs in the fridge last week.

The Un-Family is a slow-building character study of a train wreck. Holly and Megan are helpless observers as Dylan, his twin brother Seth, and their mother Elaine slowly head toward catastrophe. Unlike most thrillers, the pace is steady, building a sense of inevitable disaster.

I was particularly impressed by the novel’s structure within structure. The book is divided into sections titled with the words of the marriage vows. “For Better, For Worse” is followed by “In Sickness and In Health” and the inescapable “Till Death Do Us Part”. Within each of those sections, there is a second timeline following twins Dylan and Seth from their birth to nonplussed older mother Elaine, and through first their father’s accidental death, and then their older sister’s drug and alcohol-induced demise that orphaned Megan. From the beginning, the boys were in instinctual competition for their mother’s attention while their older sister was neglected. Their pathological need to win was a game played with ever-increasing stakes against an overwhelmed mother unwilling to see, mitigate, or even prepare for any consequences.

The Un-Family isn’t a comfortable read. Most of it takes place inside characters’ heads, dark places where their needs and self-deceptions explain the spiralling disaster nobody will be able to avoid, all told from the most unreliable of narrative points of view.

As a kind of guide, I began to notice the use of the word “different” as a barometer of change. Seth notes that after his father’s death, things will be different. Holly describes the changes in her husband as “different”. And especially it’s perceptive, resilient Megan who sees her uncle Dylan “…with the same face as Seth but everything in behind it different.” And it’s Megan who labels the “different” moments when her life changes, and especially when she worries about losing her grandmother.

The reality of Grandma being dead was so awful everything inside her was numb, and the whole world looked different, as if she was in a parallel universe populated by aliens instead of people.

Reading The Un-Family is like having a drone view of the Titanic. We know that most of the people we see will suffer or die. Some will behave horribly and some will be heroic. But we’re also offered hope, as in the midst of the tragedy, there are a few who cling to each other, who survive as a new kind of chosen family.

As always, Linda Huber weaves a compelling tale of what makes a family, and the bonds that can mean both doom and salvation.

“Detective Elliott: How was it?
Linda Drysdale: The party? Pre my dad’s death? Oh it was great.” —What happens when a family turns on their own? The desperately dysfunctional family in the film Knives Out are prepared to do anything, including murder, to acquire their patriarch’s fortune. His answer? Choose a non-relative to become his family.

7 thoughts on “Family, Friends, and Friends as Family. Plus #Bookreview of The Un-Family by @LindaHuber19 #PsychologicalThriller”