Author Sofia Grey. She spends her days managing projects in the corporate world and her nights hanging out with wolf shifters and alpha males. She devours pretty much anything in the fiction line, but she prefers her romances to be hot, and her heroes to have hidden depths. When writing, she enjoys peeling back the layers to expose her characters’ flaws and always makes them work hard for their happy endings.

My guest today, Sofia Grey, says “Music is interwoven so tightly into my writing that I can’t untangle the two. Either I’m listening to a playlist on my iPod, have music seeping from my laptop speakers, or there’s a song playing in my head – sometimes on auto-repeat.

She invites you to check out her playlists on Pinterest. And while you’re listening, please take a look at her interview below, followed by excerpts and my review of Craving.

And don’t forget to play Lie-Dar for a copy of Craving! 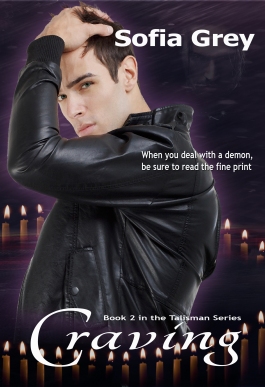 A deal with a demon, a biker psychic and the girl who might just be his salvation… if the demon doesn’t get to her first.

Dante isn’t your typical medium. With his leather jacket, tattoos and piercings, he looks more at home on his motorbike than he does holding a séance and Katherine has no intention of getting involved with him. He’s the complete opposite of the kind of man she wants and represents everything she’s tried to leave behind, but she needs a medium and he’s the best one around

Dante’s never allowed himself to get close to anyone for fear of putting them in danger. His craving for Katherine is about to bring his worst nightmares to life. ~

“Try as I might, I couldn’t find any redeeming features about Dante. I counted his failings in my head: his obnoxious, cocky attitude; his pierced and painted wannabe girlfriend; his leather jacket and black motorcycle; his tattoos and multiple piercings. Even his name rankled. Dante.”

If you asked her, she would say he needed a shave, a haircut, and a job. She would be lying. What Dante needs is just what she needs—each other. Both are hiding their real selves behind the image they project to the world. They’ve changed the names they grew up with, reinvented the stories behind the people they pretend to be, and never—ever—let the world see the truth. But both of their constructs hang by the thread a demon is waiting to snip. Katherine’s world of wealth and privilege could crash if she ever makes the slightest misstep. Dante walks a tightrope where one slip means tragedy. They should never have even met, but Katherine needs a medium, and Dante is the best.

“He placed his helmet on the floor, took off his boots, and lined them neatly beside it. Padding round the room in his socks, he peered at the photographs adorning the walls and shelves, eyeing the trinkets and ornaments. Even here, in an alien environment, he still acted as king of the jungle. His mid-length, brown hair fell roughly around his face, several days of stubble graced his jaw, yet he looked delicious. God. I’d been too long without a real boyfriend if I thought he was attractive. He was a thug! He wasn’t just from the wrong side of the tracks—he was the wrong side. No fixed address, according to Tristan. No regular employment. Tattoos. Piercings. Motorcycle. God’s-Gift-to-Women attitude. Get a grip, Katherine.

Funny how I forgot all that when he smiled at me.”

Their attraction is immediate, but both know it for the potential disaster it is. Katherine faces the loss of everything she’s worked for. Dante fears the danger to her is even more deadly. But as they work to resolve the mysteries of their pasts, Dante and Katherine realize that their relationship could be the best thing they ever have. If it doesn’t kill them first.

There are just not enough good words to say about Craving. Of course, it’s a smoking hot paranormal with plenty of romance. But it’s also a tightly crafted thriller, each chapter made up of segments told in the first person from the main characters’ point of view. In the wrong hands, this technique might be confusing or even annoying. But Sofia Grey has absolute mastery over the different voices. She allows Dante and Katherine to develop and grow personally as their relationship does. In addition, she takes us into the established but still fragile relationship of Josh and Suki (from Book 1 in the series). Supporting characters are three-dimensional and believable, even (especially!) the spirits who guide Dante.

And Sofia Grey’s command of her story line displays the split-second precision that rivals any thriller. I was watching the remaining page count drop, convinced that there was no way they were going to be able to win against overwhelming odds. The resolution, when it came, was at once unexpected, exactly right, and pointing to enough further mysteries to ensure that I’ll be desperate for the next volume. Five stars? Hell, yeah!

He shrugged out of my grasp, twisting his face away and avoiding my eyes. “I’m trouble, Kitten. If they’re your friends, that’s great. You don’t need me hanging around as well.”

This time his eyes locked onto mine, narrow and flinty. “What did you say?”

I lifted my chin. “Scared.”

A muscle jumped in his cheek. “Yeah? And just what am I supposed to be scared of, Kitten?” He took a step toward me. “You?” The toes of his heavy boots touched mine. I could smell coffee on his breath, hear his uneven breathing.

“I told you, Dante. I’m not afraid of you.” I kept my arms by my sides, my hands loose and relaxed. He took a quick breath and I leapt in. “The idea that someone else has a Talisman. It’s rattled you.”

The flicker of fear in his eyes told me everything. Squashing down my own inadequacies, I moved forward and closed the gap. Before he could demur, I draped my arms around his neck and pressed my lips against his. It was meant to be a peck, a light touch of comfort. I didn’t expect it to ignite.

I could feel everything—the softness of his cool lips, damp with rain; his prickly stubble against my chin; tight arms that wrapped around me; one hand on the small of my back, the other closing around the nape of my neck. He growled deep in his throat and kissed me back, hard. Then his mouth slanted, the kiss went deeper in a scorching blast I felt down to my knees. My hands moved of their own accord, burrowing into his hair, pulling his head further down. He tasted of coffee and something dark and exotic. Dante was delicious.

Craving by Sofia Grey from The BookChick on Vimeo.

For this week’s contest, I asked Sofia to tell us her favorite weird food combination. Please enter your guess in comments below for a chance to win a free copy of Craving. (Winners will be announced next Thursday, August 28) Frankly, her answers are ALL so… well… weird. Tough choices!

Congratulations to Rosie Amber, winner of last week’s Lie-dar. Ann says, “The “right” answer is working on a fishing trawler in the Gulf of Alaska. I’ve done all three things, but that boat was, ahem, character building. I was always wet, usually cold, and it took a month after I got back to college to get the stink of fish out of my skin and hair, despite vinegar and lemon juice baths.”

SPECIAL OFFER from Sofia Grey for my readers!

If you haven’t read Obsession, book 1 in the Talisman series, you can download if NOW for a limited time at 0.99!!!

Josh Delaney is the ideal honey trap. His charm and model good looks would be enough for most women, but coupled with his psychic ability to read their thoughts, he’s impossible to resist. Suspicious husbands employ him to test their wives, to see if they can be tempted to stray.

High profile couple Suki and Gabe Bridgewater have the perfect marriage, or at least, that’s the image they portray to the world. Behind closed doors, Gabe’s dominance in the marriage is unravelling and he decides to test Suki, using Josh as bait.

For Josh it should be just another easy job, but two things go horribly wrong.

One, Josh falls in love with Suki.

And two, Gabe refuses to let her go.