Back when the world was young and none of us even knew that Al Gore was inventing the internet and WAY before Donald Trump used the threat of political correctness to excuse sexist misogyny, I wrote this piece for the Wall Street Journal. It ended up on hundreds of fledgling list-shares. (NOTE: Boys and Girls, that’s what we used for sharing stuff before we had Twitter and Instagram. Our dinosaurs loved it.) It was my very first viral. The thing is that it almost never had my name attached and I rarely got credit.

“But that’s okay,” I said. “When they shake the bugs out of this world wide web thingy, that kind of thing won’t happen any more.”

That was in 1994, over twenty years ago. And you know what? It happens ALL the time. There are people out there who call themselves “aggregators”, which apparently means “trolls who steal humor other people have written, and post it without even attempting to credit sources”. If it’s out there for free, it’s free for the stealing seems to be their reasoning.

Only… they’re making money on it. Big money. Some have huge numbers of followers, which means they can rake in money from brand placements and advertising. 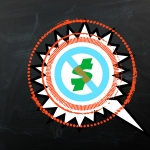 No, the real problem is that there is a deep-seated, fundamental belief that the internet and everything on it should be free. It’s the internet’s greatest strength and its Achilles heel.

Fast forward to today, when I saw this tweet from Maura Quint @behindyourback: 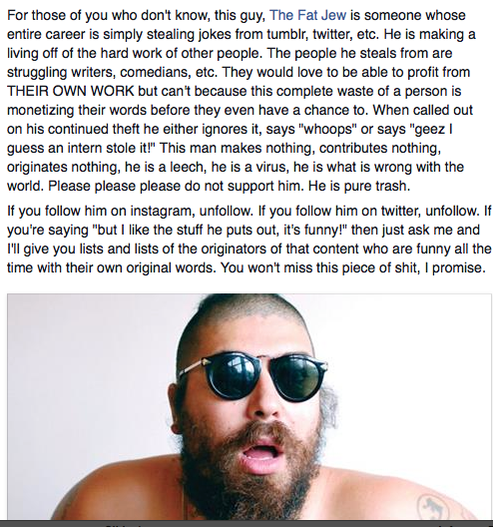 Please click on graphic and retweet. You know you want to!

Maura is angry about having her work stolen, and used by someone for personal gain. She isn’t alone. All over the web, people are getting angry—here at Buzzfeed and here at the Washington Post and here and lots more places.

The problem, though, isn’t just that thieving POS bastards like Josh Ostrovsky (Fat Jew) can and do grab material from all over the web. Or that his followers and fans and celebrity friends all think that’s just fine. Or that advertisers are willing to pay thousands for ads and brand placement to monetize those thefts. Or that he has just been signed with an agent, and that he has his own wine label. Or even that Time Magazine listed him in a March 5, 2015 article on The 30 Most Influential People on the Internet, saying “The raunchy comedian is the Internet’s court jester, posting funny photo memes (many of which he lifts from sites like Reddit and Tumblr) and absurdly posed photos of himself, all to the delight—and sometimes chagrin—of his 3.2 million Instagram followers.”

No, the real problem is that there is a deep-seated, fundamental belief that the internet and everything on it should be free. It’s the internet’s greatest strength and its Achilles heel.

The music and film industry has changed incredibly to respond to the web’s insatiable demand and belief that they have a right to…well, free everything… Graphic artists and designers, and other writers like me see our work available for free from pirate sites. Software developers find apps that were developed by dedicated teams being given away. Last week I was at a gathering where the dog and I were the only ones in the room without PhDs, and everyone was talking about how to find free books and movies for download.

Mostly, we shrug. What can you do?

Maybe, not much. Maybe not enough.

But Maura asks that right here, right now we all do something. It’s easy. If you have liked/friended/followed the Fat Jew, then unfollow him.

If you think his stuff is funny (and it is hilarious, it’s just not his stuff), then DM Maura (@behindyourback) and she’ll send you a list of the actual people who wrote the stuff and who are still posting their original hilarious work online.

You don’t go to the grocery store, fill up your cart, and walk out without paying. You don’t go to work and do your job and then accept that your company isn’t going to pay you because they’re giving away what you do for free.

Why would you support a thief who not only steals, but uses what he’s taken to make himself rich? Let’s not tell Maura and the rest of the creative, hard-working people on the web they will have to wait another twenty years to see if the internet will shake these bugs out.

12 thoughts on “@fatjew: thieving bastard or the sincerest form of flattery?”