It’s here: that special time of year when otherwise loving parents—who would normally call the police if a paunchy, oddly-dressed old guy with a beard picked up their children and started offering them candy and presents—urge their kids to suck it up and smile at the Camera Elf, who already suckered them out of a $19.95 photo commemorating this special moment. Yes, it’s the official harbinger of the season: the traditional heartwarming picture of children screaming in panic on Santa’s lap.

I remember the first time I attempted this yuletide assault. My daughter was almost a year old, and she had finally agreed to sit on Santa’s knee so she could get a closer look at the fluffy little balls of pompoms and jingle bells dangling invitingly from the end of his hat. She got a firm grip and began to pull.

As if that’s not scary enough, Christmas in Austria and nearby countries ramps up the terror in the form of Santa’s evil twin, the Krampus. When I chose the Krampus as the villain in my holiday-themed story, Don’t Touch, I had to explain to people about this monster and the traditions behind him. While a familiar St. Nicholas does make the rounds, in many Germanic traditions he’s accompanied by his dark twin, a terrifying beast called the Krampus whose job is to punish—and even take away—naughty children. With his curling horns, long red tongue, and tail, the Krampus is enough to chill any heart. 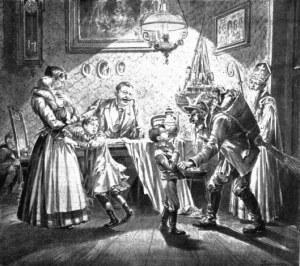 If you want a little warm-up before subjecting your kids to the big guy’s Ho-ho-ho-ing, or if you’re just looking for a quick holiday-themed read, you might want to try my Krampus tale, Don’t Touch, which one reviewer calls “vividly imaginative and full of humour, fun and excellent writing“.

Of course, you’ll never get a chance to see any of its dozens of reviews on Amazon, because when my publisher switched distributors recently, almost every review for the Null City series disappeared. Long phone calls with Amazon have ended each time with the assurance that they didn’t lose a thing because there never were any reviews. I finally got it. Amazon is The Krampus, and I’ve just been given a lump of coal, beaten with a switch, and tossed into a black hole of his review sack.

If you’re looking for a quick holiday read, please check out Don’t Touch.

[shameless plug for reviews: if you’d like a FREE review copy of Don’t Touch, please email barbtaub (at) gmail(dot)com.] Take that Amazon!

With it’s little bit quirky main characters, sweet romance and christmas tie in it was the perfect book to curl up on a couch with and ignore the weather.—Jessie at BehindTheWillows.com 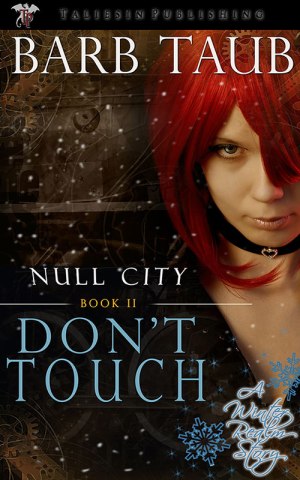 [click on image for preview and buy links from Amazon. Who knows? There might be some reviews…]

Hope flares each morning in the tiny flash of a second before Lette touches that first thing. And destroys it.

Her online journal spans a decade, beginning with the day a thirteen-year-old inherits an extreme form of the family “gift.” Every day whatever she touches converts into something new: bunnies, bubbles, bombs, and everything in between.

In hopes of a normal life, Lette joins the man she should love and the one she can’t help wanting as they fight a holiday monster who lives off the pain and terror of children.

What did some of those wonderful reviewers say about Don’t Touch?

“Lette (short for Roulette) Simoneau has a rare superpower. Each day, she has a new ‘touch’, which means that on a particular day everything she touches (with fingertips only) will turn into whatever her superpower has decided it will be that day. It might be jack-in-a-box toys, or roast beef sandwiches, or okra (that one made me laugh), or (hurrah!) diamond rings, or all manner of other things, including smells, or levitation. There are some real laugh out loud moments; it’s very clever and witty, and completely off the wall.” —Terry Tyler, best-selling author of 18 books including the Project Renova series

“A strong, beautiful heroine (who doesn’t see herself as that) with a superpower that is both humourous and heart-breaking, an original story, handsome hero’s with their own tragic pasts, a hopeful but ultimately doomed romance and plenty of action…oh and there’s an evil cat, George, …what more could you want in a book!”—Georgia Rose, author of the Grayson series

“You just know when you read something written by Barb Taub it’s going to be vividly imaginative and full of humour, fun and excellent writing. This intriguing and engaging story is no exception.” —Between the Lines Bookblog

I’m not saying The Krampus is coming to your house this year, but Amazon might show up. You might want to leave out a few extra cookies and write a book review or two. Just in case…

4 thoughts on “Merry 12 Days of Christmahannukwanzadan Solstice! Day 4: Scary Santa PLUS my lump of coal from Amazon #humor”