“Sharklets!” The Hub was following me around the house, barely able to contain his excitement.

“Where?” We’d just returned from a wonderful trip, and were going through the house. But I hadn’t noticed anything that unusual, and was pretty sure any wee sharks would stand out.

“You must have noticed the wing tips!”

Now I was seriously alarmed. “You mean like in Sharknado 50 or whatever sequel they’re up to now?”

He blinked at me. One of us was not speaking the same language. “No, for the NEO of course.”

Now it was my turn to blink. We’d just spent a week in Vienna, and I was fairly sure it had been easier to communicate with an entire country full of people whose native language was not English.

What I think of when I hear “Neo”.
[image credit: giphy]

“NEO–the New Engine Option on the flight we were just on!” His voice was fervently intense. “You must have noticed! It was 50% less noisy! Twice as fuel-efficient! And…” He took a breath, preparing to deliver his coup de grâce, “3-D woven RTM (Resin Transfer Molding) carbon fiber!” He stopped, obviously overcome by the awesomeness of the concept.

“All I noticed was that you had to pay for water, my knees were up around my ears in the world’s smallest seats, and they took away the miniscule suitcase that constituted my entire baggage allowance before I could get out my wallet to even pay for their overpriced water.” I thought for a minute. “Oh, and the people behind me holding the world’s strongest baby let it kick the back of my seat for three and a half hours while we sat on the runway waiting to be rerouted because Germany couldn’t spare any air traffic controllers that day.”

He shook his head at my pathetically Luddite approach to what—for him—had clearly been the highlight of our trip.

Just in case any of you haven’t been to Vienna lately, please let me assure you that there were MANY other trip highlights, at least for me.

It all started decades ago in a small town in Illinois when I heard the Vienna Philharmonic in concert and realized they operated at a different level from other orchestras. I decided my bucket list could never be complete until I’d heard them in their iconic Golden Hall in Vienna. Since then, every year I’ve entered the lottery for free tickets to their OTT New Year’s Eve concert (tickets range from €1500-€2500). And every year, of course, I lost. So this year I woke up one day and decided to just go to Vienna and see them play.

That decision lasted until I heard that one of the world’s best pianists, András Schiff, would be playing Beethoven’s Fourth Piano Concerto in Vienna’s fabulous Musikverein with the Budapest Symphony Orchestra under the baton of Iván Fischer. Obviously, it was time for a new bucket list.

We arrived to find Vienna dressed for Christmas. 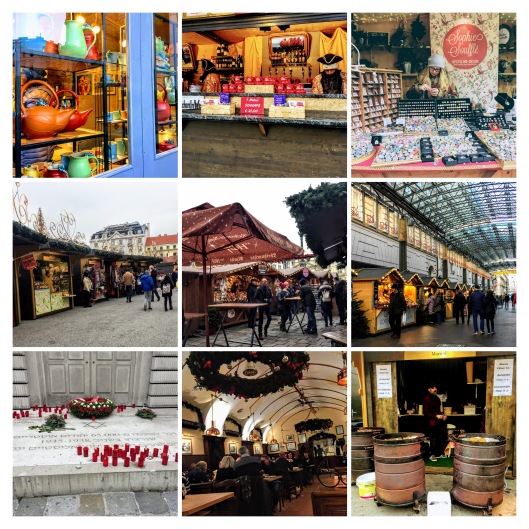 From the Christmas markets around every corner with their matching ceramic cider cups, stalls of handmade and holiday decorations, roast chestnut sellers, holiday decorations everywhere—including, somewhat surprisingly, the Holocaust Memorial—and above all the food, Vienna could give Santa lessons in Christmas spirit.

Music! We heard it in the streets of Vienna, with dinner, and in fabulous concert halls. And a panda with attitude… 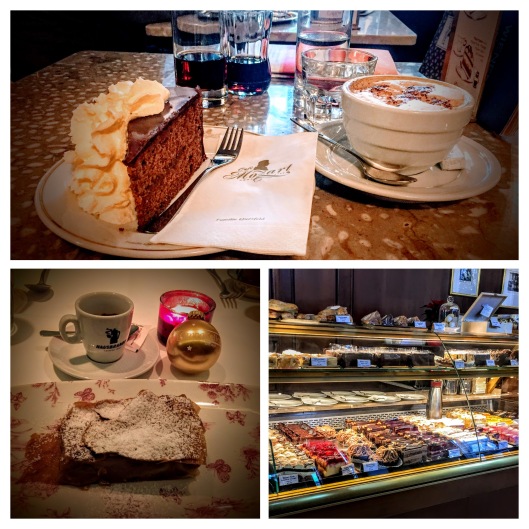 Coffee! Crisply ironed newspapers on wood hanging rods, a separate menu for the coffees, the glass of water that comes with your coffee ‘to clear the palate’, old-school waiters in suit and tie at traditional coffeehouses like Cafe Mozart or Cafe Schwarzenberg, or even the Nespresso machine in our hotel room. It’s a way of life in Vienna.

But while there were no Matrix-inspired winged sharklets waiting for us at home, there was one Christmas gift that had arrived—my new copy of Sue Vincent’s little book of poetry, Doggerel: Life with the Small Dog.  Actually, there were two presents, because somehow I’d ordered twice. So in the spirit of the season, I’m offering the spare copy as a prize. Anyone who comments on this post will be entered in a drawing for this wonderful collection of poems from the Small Dog.

Doggerel. Life with The Small Dog by Sue vincent

The relationship between Ani, the inimitable Small Dog and her two-legs, first came to light in ‘Notes from a Small Dog: Four Legs on Two’. Their poetic adventures continued in ‘Laughter Lines: Life from the Tail End’. In this new collection of poems, their daily life together takes centre stage. From the perfidy of humans who insist on bathing dogs, to the unpunctuality of writers at mealtimes, the relationship between two legs and four is explored in verse. The Small Dog reveals her continuing fascination with chicken, tennis balls and the compulsion to re-write Shakespeare, while exposing her two legs’ misdemeanours to the world.

I can’t review this book because I know basically diddly squat [is SO a word] about poetry. Luckily, my own small dog Peri has offered to step in and offer comments (in exchange for biscuits, of course).

PERI: I was thrilled to see that my friend Ani has helped her two-legs Sue to publish another book of poetry. Of course, as Ani points out in the very first poem, Copyright, this hasn’t exactly been the fairest of collaborations as Ani’s name doesn’t appear on copyright or author pages.

Aside from the prejudice against those of us who are opposable-thumb-impaired, this is a fairly accurate depiction of the joys and issues of a four-footed person surrounded by two-legs. Ani faithfully conveys her disgust with her two-legged companion’s obsession with bathing a small dog just when she’s achieved satisfactory smell levels, with vacuuming, with lawn mowing, and above all with a dog’s right and natural defense of her packlands from flying, chirping, or mooing invaders.

I particularly enjoyed the way Ani channels the Bard in A Tragedie…, turning Lady Macbeth’s lament into an outpouring of grief at being abandoned (yesterday), left alone without chicken bits.

Even though Ani has to honestly point out the (many, many) ways Sue has failed her, it’s clear to anyone with a nose and tail that Ani and Sue are devoted to each other. Ani does her best to help Sue, and graciously forgives her shortcomings. (Sue’s only a two-legs, after all.)

I think that Ani’s book, Doggerel, would make a wonderful present for anyone who has ever loved a dog. They can only benefit from the wisdom and gentle hints about the best way to make a small dog happy. And we know that’s what every two-legs lucky enough to be owned by a four-paws needs to know.

(Well, that and the chicken bits, tennis ball, and cuddles, of course.)

Note from Barb: Please don’t forget to comment on this post for a chance to win your own paper copy of Doggerel.

Meanwhile, here are a few more pictures of Vienna because… Vienna!

Vienna’s St. Stephen’s Cathedral. Not only is this a medieval masterpiece, but it’s educational too. 11th century Austrians tended to be illiterate, so the front of the cathedral had a few extra visual aides. First, men and women were not permitted to sit together, so as a reminder of who should sit on which side, the front of the cathedral boasts columns topped with male and female genitalia. Also, as the market was held in front of the cathedral square, the cathedral was the ultimate guide for weights and measures, from the donut-shaped bread sizing graphic etched into the stone to the two iron bars which measure proper lengths for cloth. Also etched and protected by a glass panel is the cryptic O5, the symbol of the Austrian resistance to the Nazis. (the first two letters of Österreich, or Austria)

Vienna’s Bitzinger Wurstelstand outside the Albertina Museum, Vienna is mobbed day and night by crowds eating sausages with cheese in buns, a treat so dangerous the city once considered banning it. (Well, briefly considered it, but then came to their senses!)

46 thoughts on “Sharklets, Panda-Sax, and a #giveaway! Plus: review of DOGGEREL by @SCVincent #travel #Vienna #humor”