Has a shelter pet graced your life?

April 30th is National Adopt A Shelter Pet Day! America’s shelters and rescues have provided companions and love that made pandemic restrictions bearable. For more info (and adorable videos you won’t be able to watch dry-eyed) click here.

I don’t know about you, but I’ve spent the better part of the last year in my house. Visits with family and friends have been virtual at best. But every day has been special thanks to one 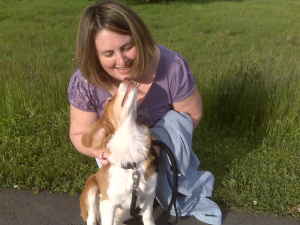 friend. She doesn’t wear a mask, and her idea of social distance is measured in subatomic particles. She drools, snores, and (sadly) can clear a room with her farts. And the day we adopted her from the shelter was one of the best days of our lives.

So today, April 30th, please support your local animal shelter. Thank them for some of the best friends we’ll ever have. And if you’re lucky enough to have a pet in your life, give them a hug for me.

You can read about Cournot, Duopoly, Tasha, Laptop, Lucy, Peri, Puck, Serapina—all shelter pets who have made our lives so special— in my book Life Begins When The Kids Leave Home And The Dog Dies. In their honor, it will be free for five days beginning 1 May 2021. An excerpt follows:

Life Begins When The Kids Leave Home And The Dog Dies 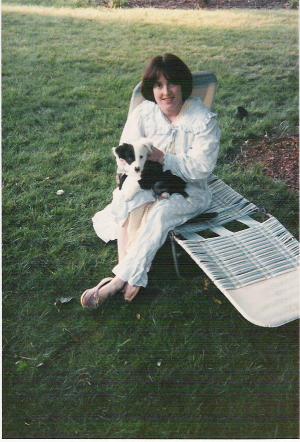 As proof of the continuing deterioration to be expected from advanced cases of parenthood, we decided it was time we acquired a puppy. Of course, before we got her we did careful research to determine the most intelligent and trainable breed for a family dog. Those who know how this technique has paid off for us in the past will not be surprised to learn that we became the proud owners of Natasha, a Border Collie who looked like Spuds McKenzie and boasted approximately two brain cells.

We reasoned that dog ownership would encourage the kids to spend time outdoors, become more responsible, and enjoy devoted companionship. Of course, the kids and the dog never got that memo. Instead I now got to spend healthful, responsible stretches of time in the great outdoors hanging around fences in my bathrobe and begging the dog to “go here”.

We consulted several books about training your Border Collie. These related tales of dogs performing feats of genius and bravery that would make even the most hardened Lassie scriptwriter blush. “Dan,” his master would say, “Go to Pennsylvania, cut my sheep, Fluffy, out of the flock of five million and get her home by dinner.” Dan, who barked in complete sentences, probably did the shopping and dropped off the dry-cleaning along the way.

Another interesting concept of puppy training is the “pack leader”. This theory says your dog will kick sand in your face and despise you for being a weenie if you don’t immediately and firmly establish your position as head wolf. Of course, while the real wolf pack leader would rip the throat out of any wolf who didn’t obey him, you are cautioned that any display of physical force on your part will cause your dog to grow up a terminal neurotic and, probably, an ax-murderer. In addition, Natasha developed a little condition the vet called submissive bladder, so nobody in their right mind would try to dominate her. At least, not more than once. 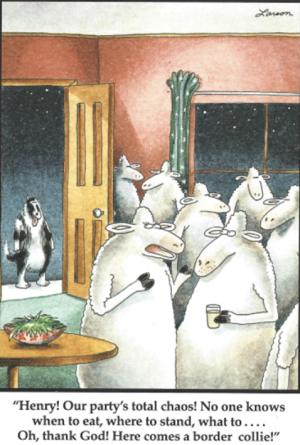 I have heard that some Border Collies are able to guard and herd their master’s children. But I found out otherwise one winter day when I went to the bathroom. Of course, like all mothers, I did this with the door open to listen for sounds of carnage. If I had to close the door, it served as signal for every child and animal in a three-state radius to fling themselves against it, demanding to know exactly what I was doing in there and for how long I intended to do it. This particular time, I hadn’t been in there more than 30-seconds before I looked out the window and saw the barefoot preschooler and puppy (with the keenly honed herding instincts of generations of championship breeding) running down the street in opposite directions. I was momentarily tempted to let them keep going, but we did actually pay quite a bit for the dog. 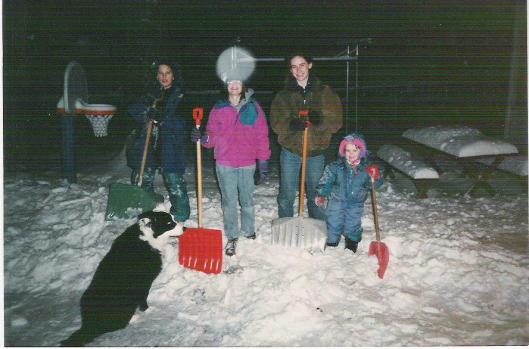 Tasha supervising the work crew. (She thinks herding cats would be easier.)

In earlier years, we sniggered with amused superiority over stories of friends and neighbors who had to remortgage the house in the face of canine calamity, such as doggie surgical teams called in to remove a $1,200 tennis ball from the stomach of the family mutt. Thus the Hub and I agreed we would never authorize the vet’s use of extraordinary measures (costing more than $50) to prolong our wallet’s hemorrhage dog’s suffering. But all of this was forgotten the midnight I was awakened by the dog being spectacularly ill. To my horror, I saw her foaming at the mouth. With visions of rabies shots for the entire household, I rushed her to the vet, wondering how much cash I could raise quickly if we sold off a few extra children. 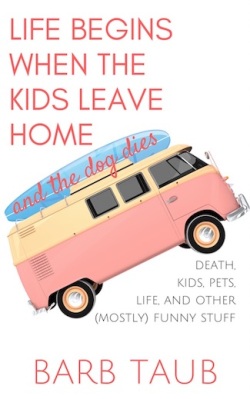 FREE 1-5 May! For more humor, kids, pets, death, and other (mostly) funny stuff, please check out my book! [click on image for previews, reviews, and free download links from Amazon]

This was the point when I discovered that the dog we had chosen for her breed’s intelligence had eaten every bar of soap in the house and was retching soapsuds.

Sorry to say, Natasha doesn’t represent a fluke in my history of pet ownership, starting with our old college cat, Buster, who spent his days (when he wasn’t having epileptic seizures) with his head up a lampshade. But for show-stopping density, the true champion was our cat, Cournot, who once stayed up in a tree for three days because she saw her reflection in an upstairs window and thought the other cat was after her. To our astonishment, she did prove to be an efficient mouser in our infested rental house. Our only theory was that as she was lying there with her mouth open, drooling, suicidal mice jumped in.

Sadly, the day came when we had to choose between the cat and our son, who turned out to be allergic to her. This was a difficult choice because while our son had never coughed up a hairball, he was not a very good mouser either. Also, the cat bathed herself, we had never had to change her diaper, and we didn’t think she would expect us to pay for a college education.

I wrote out an ad – “Young lady Persian Cat from good home seeks new family because son is allergic.” The phone rang day and night with people who were apparently desperate for a used cat. I’m not making this up. I don’t know if there was something in my advertisement which was code for “free crack”, but Madison Avenue should consider using sales pitches involving secondhand Persians.

“Yes, ladies and gentlemen, if you order this amazing cookware value today, we will include absolutely free this used Persian cat. Operators are standing by…” 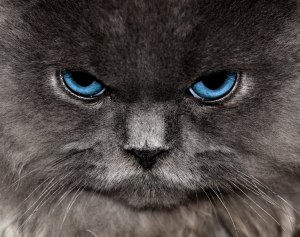 Tell us about the pet who made your life special!