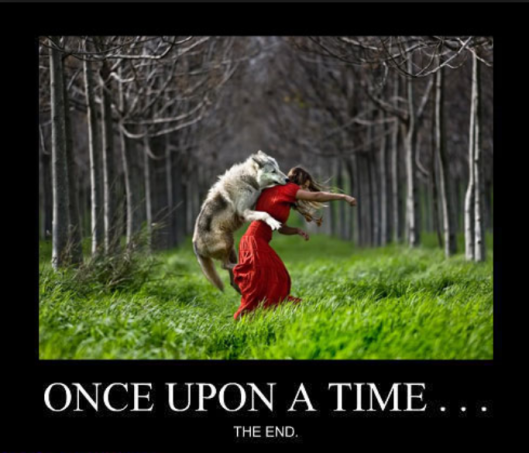 How to tell a Granny from a Big Bad Wolf – Part II.

In my last post here, I explored what Little Red Riding Hood would look like as a thriller, using Christopher Booker’s metaplot theory. (You should read that post first: it will definitely be on the final.)

Now I’d like to see how some of the books I’ve been reading recently might fit into that theory. First up is the psychological thriller, where it’s not so much what the characters do but why they do it.

In the fairytale, if it turns out that Granny actually died in her sleep years ago but Red’s Mom and the Woodsman have been gaslighting her by sending her to visit ‘Granny’ when Red keeps having flashbacks to the funeral, all so Mom can get her hands on Red’s inheritance, it’s a Psychological Thriller, and Wolf has to wean Red off the psychedelic drugs they’ve been slipping into the goodie basket Red has sampled so much she doesn’t even realize that wolves don’t actually talk.

An excellent example of thrillers in general and the psychological thriller in particular is Means to Deceive by Alex Craigie.

Means to Deceive by Alex Craigie 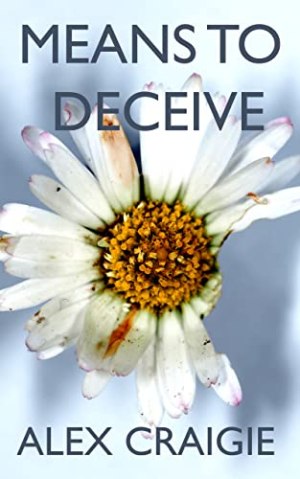 [Click on image for excerpt, reviews, and buy links from Amazon.]

Eighteen months ago, Gwen Meredith left the job she loved and came back to Pembrokeshire to help support her irritable and increasingly confused grandmother.
But someone is pursuing a vendetta against her.

As the attacks become more malicious, her old anxieties begin to build.
She’s attracted to her new neighbour who is keen to help…but can she trust him?

When those closest to her are threatened, her desperation mounts.
Who can she trust?

Gwen has a dark secret of her own.
Can she even trust herself?

Writing a psychological thriller is tricky because most of the standard thriller tropes—lots of action, damaged or amateur detectives, dead bodies, fast pace, tension, suspense—aren’t nearly as important as what’s happening inside someone’s mind. Author Alex Craigie’s Means to Deceive is a master-course in how that’s done, while subverting many of the rules along the way.

‘Never start with a dream sequence’ is one of those rules, right up there with ‘Show; don’t tell.’ But Means to Deceive subverts that mantra with a powerful dream sequence from Gwen’s tragic past, triggered by a disturbing encounter from the present. Both highlight Gwen’s lack of control in her personal and professional lives. As the story slowly developed, I was frustrated at first by what seemed Gwen’s inability to take charge of the smallest aspect of her life. Since the tragic death of her mother when Gwen was a small child, she’s felt alienated from her world, accepting the times she or those she loves are hurt by a series of unexplained events. Now she’s trapped in a job she needs but doesn’t want, caring for a grandmother who needs but doesn’t want her, and in fear of an increasingly deranged stalker.

Slowly, as the story developed, I realized the things Gwen shows us aren’t nearly as important as the things she doesn’t tell us. I began to question Gwen’s assessment of herself, her recollections of the past, and her understanding of the present. She’s the most unreliable of narrators, increasingly unsure of her own memories or interpretations of events. Objectively, she’s a victim—of a disturbed stalker, a lecherous boss, a judgemental small town, a grandmother whose dementia leaves her angry and judgemental.

Gradually I realized that Gwen is barely hanging onto her own sanity. She meets her attractive new neighbor Ben, but has questions about his motives and her own feelings toward him. As dark events around her escalate into danger for herself and those she loves, we join Gwen in questioning what she might be capable of.

I’m afraid that I’m losing control and am about to fall into a dark, bottomless pit. Part of me wants to scream to release some of the tension; part of me knows that that very scream may trigger the fall.

As the story unfolds, however, we begin to see that seemingly-fragile Gwen has a surprisingly strong core that lets her continue to care for the important people in her life despite the escalating attacks. I began to admire and root for her.

Means to Deceive is a deceptively simple story where we soon realize that very few people are exactly the image they project. The pace, slow at first, steadily increases to a terrifying level. The stakes are seemingly trivial, almost impossible to believe they could motivate the escalating violence. But even as Gwen seems to be deteriorating, she is actually developing that inner core.

If you like slow-burner psychological drama, a touch of romance, and character-driven plots with unreliable narrators, I recommend Means to Deceive.