When is a vacation too good not to be true?

Who is Pamela? Who am I? Some days I’m a child with self confidence issues. Some days I’m a young woman determined to change the world for the better. Some days I’m a hundred and two and wondering what the hell just happened. But isn’t that what life is all about? Each day is a wonder to be fully investigated . Each night is a realm to be thoroughly exploited. And everything in between is where we make our choices. I love to write or rather words flow from my fingertips and hopefully I understand them! I love to paint and I love life, my life. I refused to let an itty, bitty incurable disease interfere with my passions. There is still plenty of future ahead and I’m nosy!
Written for you from the Chilly North: Canada!

I’m thrilled to turn the blog over to my friend Pamela today. She comes from the frozen north (Canada), so you can be sure that she’ll have the coffee and tea steaming hot and the pastries suitably to-die-for.

Pamela, known to her blogging fans as quiall, is of the most unfailingly inspirational bloggers out there. Her Daily Quips and hilarious Shady Quips never fail to brighten my day.

Add that to her beautiful paintings, and her stories where the only thing you can count on is that there WILL be a twist, and her blog at Butterfly Sand  is one you won’t want to miss.

Some of her recent Daily and Shady Quips are:

So pull up a chair next to the fire. Pamela is from Canada, so she probably doesn’t even notice the cold, but you can throw a couple more logs on while nobody’s looking. Then grab your coffee and join Pamela to talk about holidays and vacations. 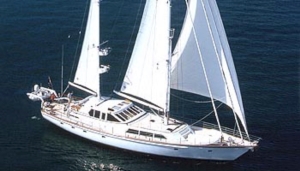 At five o’clock today we are expected to meet at the harbour for the next leg of our vacation.  Teddy has booked us a sailboat.  We are going to sail across to Australia, expecting to hit the harbour there just in time for the New Year’s Eve festivities.

Isn’t she a pretty little thing?  Actually she’s 102 feet long with three crew, and sleeps six.  All for Teddy and me!  The way I figure it I could spend the next two days relaxing with a good book and my feet up.  They said it would be a little choppy on the way over but how bad can that be? 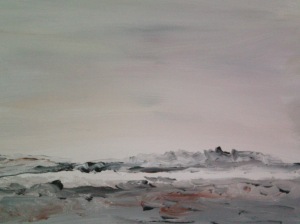 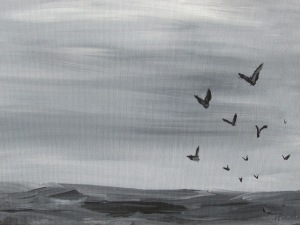 Okay that was a little nerve-racking! We left a little later than planned, about 7 p.m. so we didn’t actually arrive in Sydney until about 10 p.m..  I’m told it was an average crossing.  It was an eye opener for both Teddy and me.  There were waves and the boat was rocking.  Yes I was afraid!  But I also believed that they would never have taken our money if they had planned on killing us so soon afterwards.  In the years to come I will remember this portion of the trip fondly, I hope.  I never for a moment thought that the crew was going to let us down.  I’m sure they had a wonderful chuckle about these bloody women who thought they were sailors.  Were we ever wrong!  They assure us that we have been through the worst.  I believe the phrase they used was ‘clear sailing from here’.  I hope they are right.  We saw lots of dolphins and sea birds including albatrosses but no other vessels. The sun doesn’t set until late — about 8:30 or 9pm so it was incredible to look out over the bows and see nothing but water.  It was humbling.

One of the crew also informed us that what we have just done is known as “crossing the ditch”. Evidently it is an affectionate term for traveling the 2000 km of the Tasman Sea between Australia and New Zealand or vice versa.  I’m glad we made it whatever it is called and now I think I’m going to open a bottle of champagne in honour of the New Year and the Old Year.  Cheers Teddy!

We had a wonderful night last night!  The crew from this boat really know what they’re doing.  We dropped anchor just off Bradley’s Head, Mosman.  Our vantage point, while distant, was perfection.  We could see everything and we had no crowds to deal with.  Unfortunately none of my pictures turned out.  They would not have done justice to the brilliant display that the Australians are known for.  Wow!!! And now today I’m going to do what I’ve wanted to do for weeks.

Well we didn’t do much yesterday.  I guess we were recuperating from the night before.  Teddy did go ashore to do a little shopping but she didn’t seem to buy much.  I relaxed on the boat, read a little, ate a little and basically did nothing constructive.  I even got a nap in!  This morning we decided to spend time organizing the next leg of the trip.  The crew from the boat spent a great deal of time fiddling around the motor.  They weren’t talking to us very much so I’m beginning to think that something is up.  And sure enough it was.  Teddy went for a walk around the harbour and arrived back just in time for cocktails and then the captain informed us of a glitch.  It seems that we had thrown a thingamajig from the whatchamacallit and it will affect the duhicky.  That’s about how much I understood too!  What it boils down to is that our trip to the Great Barrier Reef will either have to either be postponed for two weeks or cancelled.  We are sad, we are angry and we understand that these things happen.  The people we hired the boat through will be reimbursing us.  That’s good news.  They have also made arrangements for us to go back across the ditch with a family from New Zealand.  They have a cabin cruiser and are more than willing to have us as guests.  They have to leave in the morning about 10:00 a.m. 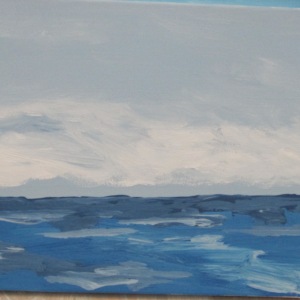 I think because we kind of knew what to expect, the crossing of the ditch wasn’t as traumatic as it was on the sailboat. Besides, this time we actually had children that entertained us!  And it is a very small world that we live in.  It seems that the brother-in-law of the husband’s second cousin is a lawyer in Toronto!  Now that’s what I call several degrees of separation.  We laughed, we played cards and we talked about each other’s own countries.  I think we learned more about New Zealand and its people in the hours that it took to cross the Tasman Sea then we had in all the books we had read and the tourists’ places that we had visited.  Before we reached the harbour in Auckland we had promised to keep in touch.  We exchanged e-mail addresses and phone numbers.  I really do hope I can keep in touch with these people because they’re lovely!

That is just a taste of a 6 week vacation to New Zealand, unfortunately it never happened in the real world. But if I ever go there . . .

I hope you enjoyed this portion of my virtual vacation.  Thanks for reading.

Thanks so much Pamela for joining us today!

**What is your dream holiday? Where would you go, and who would you want to go with you?**