Can I come on your next trip?

People ask this all the time. But if they knew the whole truth about our trips, I wonder how many would change their minds? Take the past few days…

I know there are some who deny climate change exists [cough, POTUS, cough, cough] but it’s hard to find other explanations. The snow in Glasgow was thick last week as we headed for the airport. I checked in for the flight even as the announcements of airport closings were coming nonstop. My flight to Dublin (with the Abu Dhabi connection) was delayed, but still on the board.

By the time we landed in Dublin, the connecting flight had already been called but I thought I could still make it. Except… the two rounds of local cheese I was bringing to India stopped the security belt while the agents had a conference about whether or not cheese was a liquid. (!) When they finally released my much x-rayed cheese, I ran on only to be stopped by Irish immigration. I raced for the other terminal (security again, yes those cheese rounds are a solid, no they don’t violate the liquid limits) and arrived to see the plane still sitting there. But I wasn’t allowed to board, because they’d already removed my luggage.

They sent me back to the first terminal to rebook my flight.

Nice man in passport control: How long have you been in Ireland?

Me: About ten minutes.

Him: Was it something we said?

The friendly people at the Aer Lingus desk were sympathetic, but explained there were no other flights until the next day. They sent me off to a hotel, where I was assigned the last available room. I found out it was the very last one when my neighbors on either side had been screaming for THREE EFFING HOURS, and I called the desk to beg for help.

My left-side neighbor was very upset about tacos. I’m not sure just what tacos had done to give such offence because as far as I could tell, taco was the only non-obscenity word used in his tirade. My right-hand neighbors were an elderly couple who were apparently in the last stages of consumption. They spent the evening hacking up their toes and screaming into their phones to inform every person who had ever known them about their delayed flight.

When my 4:30AM wakeup call came, I stumbled downstairs and caught the shuttle back to the airport. Sadly, my carefully chosen window seats were a casualty of the new itinerary, and I ended up in the center seat of a center row. On my side was a chatty lady who hated… well, everything. The entire trip was a diatribe about fellow passengers, the airline, babies, people who had babies, and food. I was fascinated, and started feeding her topics just to see what she hated about each one. (Kittens? They smother you. Puppies? She’s allergic. Sunny weather? Skin cancer. Mother Theresa? Just in it for the publicity.)

By the time we landed in Abu Dhabi, I hadn’t slept in almost two days, and I was a wreck. That’s the only possible explanation for the fact that I drank the Diet Coke WITH ICE they served at the Abu Dhabi airport. Yes, it’s true. I drank the water.

I finally arrived in India, and the next day we started out on our journey. I was waiting for the Delhi-belly ax to fall, but so far all seemed okay. We stopped for lunch and Jaya thought the vegetable dish was a bit…off. I was hungry, though, so I ate the most.

We checked into our hotel, a maharaja’s former summer palace with fabulous views everywhere except from our room, which turned out to be a small, virtually windowless bunker. The “view” was from the bathroom window, if you leaned over and looked around a corner. But they told us there were no other rooms available, and anyway by then the inevitable had started.

(We didn’t have the pretty dresses, but this is actually close documentary footage…)

Care of the unwisely consumed ice combined with the dodgy veggies from lunch, the vague rumblings from my nether regions had turned into urgent commands. Janine and Jaya were delighted. Out came their traveling boatload-o-drugs, and soon I was popping pills like M&Ms. By then the others were also feeling the lunch effects, with much additional ensuing medication.

After some truly regrettable visits to the loo, I staggered back to my bed.  And screamed. And screamed again.

From the corner of my eye, I’d caught a flash of fur dashing across the floor.

[Digression: have I ever mentioned that I DO NOT like rodents? As in “I’m stuck in a dungeon with Jack Nicholson wearing an evil clown face and brandishing an ax and I can’t get a cup of coffee” levels of DO NOT LIKE?]

I could see Janine staring at me, clearly wondering if they’d finally given me too much prescription meds. Just then Jaya screamed too, as the rodent ran over her foot. By the time the hotel people arrived, we were standing on our beds, screaming. This didn’t seem to surprise the hotel staff, who arrived with a bucket and small whisk broom, evidently their standard rodent-removal equipment.

The rodent, who had wisely made itself scarce, was not removed. The three semi-hysterical, borderline incontinent travellers were. Suddenly, the hotel discovered they did have a suite available, one with a balcony, fabulous view, and even a fireplace (with light-up “fire”). It was about double the size of our first room and even came with bunches of amenities such as a table and chairs, antique sofa, china cups, and “dental kits”.

Because India was having a random strike, we spent the next day taking pictures (Janine and Jaya) or lounging around our lovely room and even lovelier bathroom (me).

Next time you’re looking for a hotel upgrade, I highly recommend climate-change meltdown, roadside food poisoning, and a rodent. 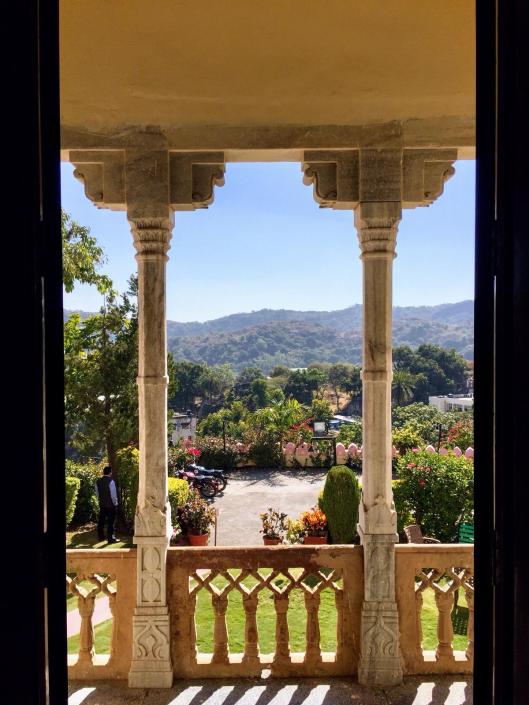 View from our hotel Balcony (after rodent-upgrade)