“Madam. You are coming to India every year for business?”

The nice officer at the eVisa desk at Delhi Airport was confused about all the India stamps in my passport. No, I explained, Madam just likes the place. As my friend Jaya told me, people in India are very kind.

The officer gave a skeptical look toward the people waiting in line behind me. We’d all poured off our respective international flights and into the immigration hall with its brand new—and, for India, remarkably optimistic if woefully inadequate—serpentine queuing lanes. A bald man with long saffron robes and a New Jersey accent politely reminded the couple who had shoved in front of me that the end of the queue was behind us. When they just stared, he repeated it in French, then Italian, and finally German. Defeated, they moved back.

Everyone was grumbling about the disorganization and the wait, when a nice young man with an official looking card hanging from his neck lanyard called out for “Sixties-plus” to follow him. The monk and I eyed each other, grinned, and gave chase. Our new leader took us to the (empty) “India Nationals Only” lane, and we swanned up to the front. Behind us, the grumbling grew louder from those who had not had the foresight to prepare for their trip by being older than age sixty.

I followed the immigration officer’s gaze to the unhappy masses behind us. “Technically, they aren’t in India yet,” I told him. “I’m sure once they are, they will be much more kind.” He nodded politely, stamped my passport (lots), and waved me through.

Why my suitcase is REALLY easy to find.

My friend Janine’s flight had already arrived, but I wasn’t worried about finding her. As a rule, we only have to go as far as the nearest coffee stall. My suitcase was easy to spot, and we were soon heading for the exit. It was well after midnight, but the wall of honking horns, shouting, smells, and the occasional passing cow could only mean one thing. It was India, and we were back.

The landing form had asked where I was going in India, and I’d put down a few random cities. Honestly? I couldn’t really remember and didn’t much care. My friend Jaya was meeting us at the airport, and she LOVES to plan stuff. I’m sure she told us where we were going this year, but the truth is she’s so scary efficient at it, Janine and I have developed a simple travel rule that we like to call “Do whatever Jaya says.” It works. Always.

Sure enough, Jaya showed up with her driver and we piled into the car. I asked her what we were doing, and she laughed. Not. A. Good. Sign. That’s when I remembered her travel rule. “A travel day is a terrible thing to waste.” Jaya LOVES morning flights, the earlier the better. As we headed for our Delhi guesthouse, she told us we weren’t so much spending the night as taking a nap. 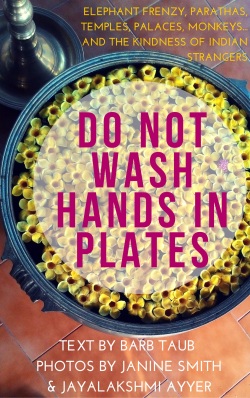 Want to read more of our adventures in India? [click on image for preview, reviews, and buy links from Amazon]

Sure enough, an hour and 45 minutes later Jaya was somehow herding her two semi-comatose companions—there might have been drooling—back to the airport for our flight to Bhubaneswar (a city we were so completely unprepared to pronounce that it remained “The B-Place” for the rest of our journey). As usual, travelers carrying bottles of water, wearing boots, and generally disobeying any number of the security rules sailed through airport security. We went through the separate “Ladies” lane, where a serious young woman in a military uniform took me into a curtained booth, reviewed my appendages with her handheld scanner, and waved me through.

My hand luggage wasn’t so lucky. A man brought over my backpack and demanded to know if Madam had any coins. When Madam confessed she did, in fact, possess such things, he fished through my pack, upended my purse, and shook. Out cascaded:

We all stared at the mess. Then he picked up the whole thing and put it through again while I quietly died of embarrassment. 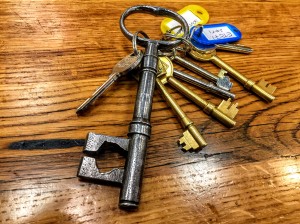 Still no luck. The security officer was NOT amused. Madam was clearly hiding something. He fished again and came up with my keys. These aren’t just any keys, of course. They belong to the Victorian doors of our Glasgow house, and frankly I’m not overly fond of them either. Still unsmiling and clearly unconvinced that a chubby foreign grandmother didn’t represent a significant terrorist risk, he shoved my demolished backpack to me to repack. Janine and Jaya tried to look like they had never seen me before.

Between my near-miss arrest as a household key terrorist, recent demise from the backpack-o-shame, and my terminal case of jet lag, the flight to the B-Place remains a series of odd images—the “Every Supermodel’s Favorite Ramp” we climbed to board the plane, the charming turbaned and mustachioed gentleman providing the safety instructions, the breakfast of World Famous Hyderabadi Biryani (with spokes-icon Superhusk) which the stewardess murmured might be “a bit spicy” as she added water and told me to eat “only after eight minutes”, the thoughtfully-worded “Get well soon” bag I spent the remainder of the flight wondering if I’d need after I ignored her warning about the World Famous Hyderabadi Biryani… 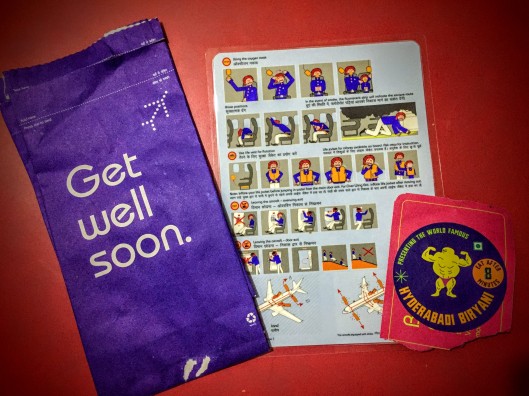 I’m not saying these items were connected but…

As always, Jaya’s planning was perfect. Our new driver was waiting for us and we zoomed through the airport in the B-Place with only a slight detour to wonder if those were really giant sand turtles or just the jet lag and sleep deprivation.

Giant Sea Turtles by international sand artist (I did NOT make that up) Sandarsan Pattnaik.

Our driver Kalia loaded us into his car for the drive to Konark, home of the Sun Temple and more importantly to us, the music and dance festival that was the reason for our trip. All three of us enjoy classical Indian music and dance. Although we usually manage to see some, this year we decided to build our trip around the Festival. We moved the trip to later than our preferred January, and told everyone about our upcoming treat.

In Konark, we headed first for the Lotus Eco Resort.

We checked into our little thatched-roof villa and headed to the beach restaurant for lunch. The tandoori-smoked fish hanging in a row from hooks eyed us balefully, and we decided to stick with vegetarian fare. 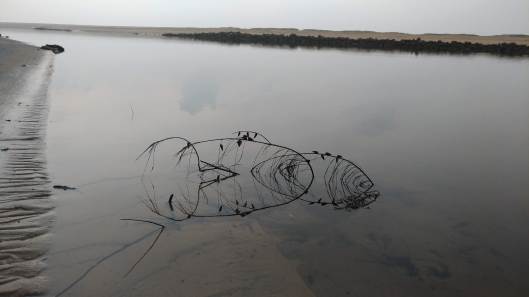 Located on the beach and nestled amid flower-filled old tires repurposed as planters, even nature itself seems to have conspired with Lotus Eco Resort to recycle floating debris into art.

It didn’t matter, because all our thoughts were focussed on the evening festival and what performances we might see. Jaya was surprised that the festival manager, who had been corresponding with her until the past few days, had still not confirmed the lineup of acts for that night. But we all decided we could just go a bit early, stop for a quick overview of the Sun Temple, and then head to the festival early enough to get good seats.

We arrived at the festival grounds, with the giant posters and signs advertising the festival. Although there was a line of life-sized elephant statues lining the road, there were surprisingly few people outside.

We went in and found out why. With absolutely no fanfare, not so much as a sign outside, and certainly nothing on their website, the festival was no more. A half naked man who’d been bathing in the fountain supplied the theory that the organizers had an “altercation” involving the police, and the festival had been cancelled that day. As we stood there trying to figure out how the single motivating event of our trip had evaporated, more cars and auto-rickshaws brought other would-be festival goers. Like us, other hopeful festival attendees from around the world were stunned to find the event had been cancelled.

If there’s anything we’ve learned in our India travels, it’s that when India closes a door, she opens a window—in our case to the ticket booth for that evening’s Light and Sound Show at Konark Sun Temple. For 50 rupees each (about 70¢/50p), we saw an absolute extravaganza that told the history of the Konark Sun Temple from its construction in early 13th century, its almost immediate fall into disuse, and fate through the centuries. Legend has it that Langula Narasingha Deva I gave the royal architect and his team of 1200 artisans twelve years to complete the project or face beheading. As the deadline loomed, nobody could figure out how to set the top piece crowning the new temple until Dharmapada—a 12-year-old boy and son of the architect—managed the feat. When he heard the other artisans still feared for their lives because a boy had accomplished what they could not, Dharmapada threw himself from the top of the temple and drowned in the seas below. In addition to great (if historically undocumented) legends, our entry fee also entitled us to a chair on the lawns, headphones in English, and about a million enthusiastic mosquitos.

Later, we were telling a lady in a gorgeous locally-handwoven sari about the festival cancellation, and her only comment was, “That’s India for you.” We agreed, and were back at the Lotus Eco Resort in time to see the Super Snow Moon. 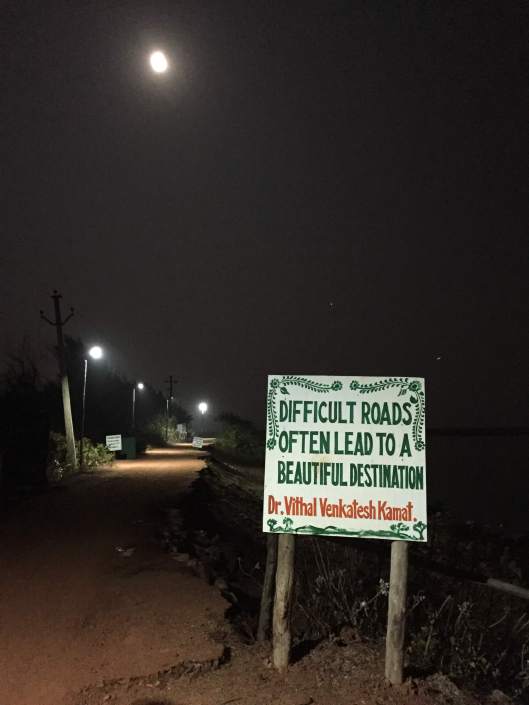 Although the last part of the road to the resort was…well…not a road, the end of the day couldn’t have been more perfect.

50 thoughts on “When India closes a door… #travel #humor”