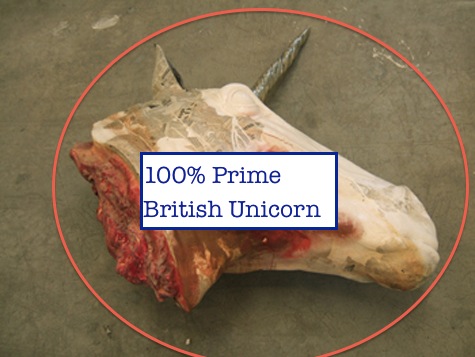 The good news: scientific research teams have isolated unicorn DNA. The bad news: they found it in British supermarket products labelled as beef.

Some have wondered why people here in England are so upset about the possibility that their food contains horsemeat. The English have no problem eating cow, chicken, lamb – usually with some form of pig in/on each of them. One theory is that horses, like dogs, are companion animals and you wouldn’t eat your Mr. Snookums. Another is that the horse has a long history as a transportation provider, and you wouldn’t eat your Prius.

Once you eliminate the impossible, whatever remains, no matter how improbable, must be the truth.” Sherlock Holmes/Arthur Conan Doyle.

I think the actual truth is that they’re saving the horses for an emergency. I realized this last week when we toured Yorkshire’s Bolton Castle. The current owners of Bolton Castle trace their family back to Sir Richard Scropes, builder of the original castle in 1378. Because Reality TV hadn’t been invented yet, medieval English entertainment consisted of surviving the Black Death and choosing which political team to support. Stakes were high. (As perspective, if the US followed the medieval leader-selection trope, Barak Obama would become president by murdering his close relative, George Bush. He would then imprison the leaders of the Republican Party in the Washington Monument, behead the CEO of the NRA, accuse the Chairman of the Federal Reserve of being a witch, and either burn the houses of every Republican in congress, or arrange marriages between their minor children and highly-placed members of his party.)

Overall, Sir Scropes’ descendants have been pretty good at picking the winning team, if you don’t count the times a rejected king burned down the castle. Or all the beheadings. But a true low point came during the Civil War in 1644 when the young owner of the castle signed with Team King. The Parliamentarians promptly laid siege to the castle for the next six months. How did Bolton resist for so long? You guessed it. When starvation loomed, they ate every horse in the place.