I’m am so excited to reveal the cover of Round Trip Fare, the newest book in my Null City series. Although a sequel to Book 1 (One Way Fare), this is the stand alone story of twins Carey and Connor Parker.

Round Trip Fare
by Barb Taub 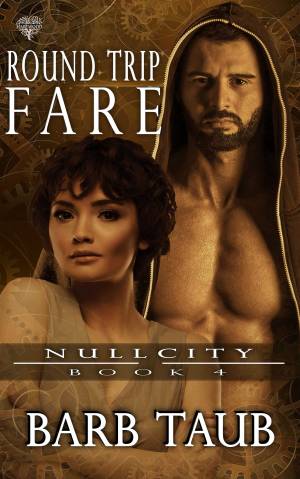 Is it wrong that shooting people is just so much easier than making decisions? Carey wonders— and not for the first time. But the Agency claims this will be an easy one. A quick pickup of a missing teen and she won’t even have to shoot anybody. Probably.

Carey knows superpowers suck, her own included. From childhood she’s only had two options. She can take the Metro train to Null City and a normal life. After one day there, imps become baristas, and hellhounds become poodles. Demons settle down, join the PTA, and worry about their taxes. Or she can master the powers of her warrior gift and fight a war she can’t win, in a world where she never learned how to lose.

And then there is… him. For the past two months, a dark stranger has persistently edged his way onto the mental game board behind her eyelids. Well, whatever trouble he’s selling, Carey Parker is not buying. Her to-do list is already long enough: find her brother and sister, rescue her roommate, save Null City, and castrate her ex-boyfriend. Preferably with a dull-edged garden tool. A rusty one.

She just has a few details to work out first. Her parents have been killed, her brother and sister targeted, and the newest leader of the angels trying to destroy Null City might be the one person she loves most in the world. And her sexy new partner’s gift lets him predict deaths. Hers.

NOTE: Calling all book reviewers and bloggers. If you’d like a review copy or other info, please send email here. I’d love to hear from you!